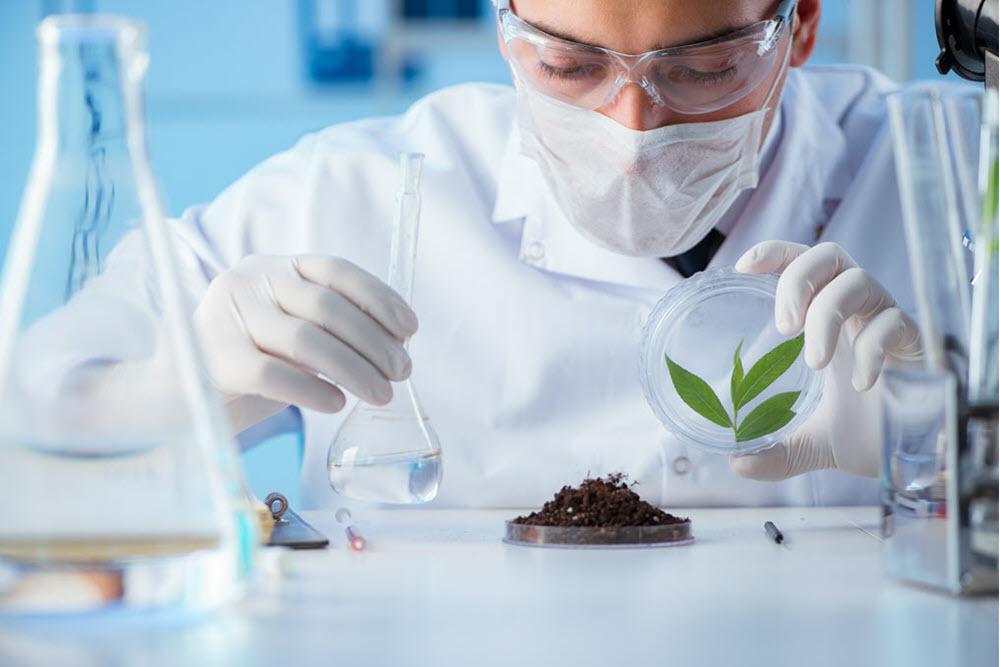 Once considered a niche product, organic produce sales are on the march. Today's health-conscious consumers are willing to pay a premium for the perceived quality benefits of organic foods, which are poised to grab additional market share as new industry players, such as Amazon with its acquisition of Whole Foods, enter the retail grocery market. The increasing demand is also driving the need for more organic produce testing by certified soil testing labs — a trend we heard loud and clear at Pittcon 2018.As Consumer Taste for Organic Produce Grows, the Agricultural Revolution Shifts to Meet New DemandAs the saying goes, "If You Ate Today, Thank a Farmer."And indeed, we should. Since World War II, the Agricultural Revolution has spread around the world, allowing farmers to increase their production yields dramatically. Despite predictions to the contrary, modern agriculture is now able to feed a world with 7.6 billion hungry mouths.But now, more and more consumers, particularly in western countries, are taking a closer look at the food we eat.Studies show that an increasing number of consumers are considering organic produce purchases. Why? Many consumers now believe that organic produce is a superior, higher quality product.Overall, American consumers are increasingly concerned. They are worried about the obesity epidemic in children, and the potential impacts of pesticide residues in our food supply. As a result, an increasing number of shoppers are educating themselves about what they eat. From "Eat Local" and "Farm–to–Table" campaigns that promote sustainable agriculture, to new food consumption trends such as "gluten-free" diets, and awareness of "GMO-Free" labeling, consumers are showing an increased awareness about where their food comes from and making new purchasing choices as a result.Compared to American consumers, European consumers tend to be even more selective in their food consumption preferences. In fact, consumer protests by Europeans (who reject what are perceived of as "lax" American agricultural practices, such as using chlorine to process chicken and the introduction of GMO-based products) are widely credited for scuppering the long-standing TTIP trade negotiations between the US and Europe.We haven't seen the last of these controversies. Bayer's pending acquisition of Monsanto, makers of the pesticide glyphosate (marketed as Roundup®), has reignited the row in Europe over pesticide usage in the food chain. Publicity surrounding the issue may ultimately drive increased preference for organic produce, both in Europe and here at home.While an Increasing Number of American Consumers Prefer Organic Produce, Availability and Price Barriers RemainWhile organic produce sales are way up, there are some constraints on future sales growth that need to be addressed.The first issue is cost. Organic produce commands a premium price, which is due to a number of factors, including scarcity (organic farm production has not kept up with increasing demand).While a Journal of Consumer Affairs study indicates that organic food consumers are willing to pay a price premium of 30% over conventional food products, spending additional money on food is not an easy option for disadvantaged/underprivileged households who are struggling to purchase groceries.The second issue that is limiting the mainstream adoption of organic food products is the issue of "Food Deserts", which is the term that researchers use to describe neighborhoods (often underprivileged) that do not have green grocery stores nearby.The food desert issue has become so critical that the Salvation Army is opening its first grocery store, in Baltimore, to address the issue.As Distribution Channels Open Up, the Future of Organic Produce Farming Looks BrightMarket forces may be at work to solve the twin problems of high cost and limited availability."Buy Local" and "Farm-to-Table" campaigns are opening up new distribution channels, as consumers flock to local farmers markets. Consumers are also showing an interest in purchasing monthly allotments of produce (known as "shares") directly from farmers.But as romantic as the notion of buying organic produce directly from the farmer may be, it's small potatoes (pardon the pun) when compared to the impact of Walmart's grocery sales, which are estimated to account for 33% of US grocery retailing.In 2006, Walmart began to offer organic produce in its grocery aisles. As the proverbial 800-pound gorilla in the room, there is no question that Walmart has broadened the distribution of organic produce across the nation. (According to Walmart, this is part of their overall strategy for sustainable agriculture.)But wait! As of last year, we now have a 1,000-pound gorilla in the grocery retail market. Amazon's purchase of Whole Foods appears to presage increased growth (and possibly lower prices) for Whole Foods' organic produce moving forward.Walmart is looking over their shoulder at the Amazon / Whole Foods duo. Meanwhile, the notoriously low-margin grocery retail business continues to see more turmoil, such as the recent bankruptcy restructuring of Southeastern Grocers, the parent company of Bi-Lo and Winn-Dixie, which is having to close 94 of its 582 stores.The Shift to Organic Production Methods is Increasing Demand for Agricultural Soil Testing LabsDespite the jockeying for position among top grocery retailers, the organic produce market seems poised for increased growth.Read more ... https://formaspace.com/articles/sample-processing/organic-farming-soil-testing-labs/?utm_source=openpr&utm_medium=content&utm_campaign=article-032618Formaspace advances the spirit of discovery and creation through the design and manufacture of custom business furniture. Our furniture marries form to function with flexible solutions for clients in the laboratory, industrial, and office environments.Formaspace serves over 80% of the Fortune 500, as well as universities, governments, small businesses, and individuals.Formaspace1100 E. Howard Lane, Suite 400 Austin, TX 78753800.251.1505

You can edit or delete your press release Can Current Soil Testing Labs Meet Growth in the Organic Farming Industry? here

08-10-2020 | Science & Education
Formaspace
12 FUTURE TRENDS FOR FORENSIC TESTING LABS
To misquote Shakespeare, “now is the summer of our discontent.” By all measures, the summer of 2020 has been a difficult one across the board. For forensic science professionals, who recognize the importance of maintaining the public’s trust, two issues have moved to the forefront as a result of the Coronavirus pandemic. The first is a renewed public interest in the important role of laboratory science, no doubt in part due to the
08-09-2019 | Logistics & Transport
Formaspace
Reduce Material Handling Cost: Ergonomics to the Rescue!
That’s the finding from Liberty Mutual’s new 2019 Workplace Safety Index, which identified five types of accidents that are responsible for two-thirds of the injuries in Transportation and Warehousing: Overexertion involving an outside source Falls to the same level Roadway incidents Other exertions or bodily reactions Falls to a lower level What can be done to make packing and shipping stations safer for everyone? The answer may lie in improved ergonomics. Unlike Canada and the EU, which have
12-21-2018 | Business, Economy, Finances, B …
Formaspace
5 Core Concept to Operate a Museum
When it comes to understanding how to manage a museum effectively, it's helpful to learn more about the roles of five departments that make up the backbone of museum operations. They are (1) the Conservation Department, (2) the Documentation Department, (3) the Research Department, (4) the Exhibition Department and (5) the Educational and Information Services Departments. In this article, we will look at each of these five museum departments in detail. 1.
10-19-2018 | Business, Economy, Finances, B …
Formaspace
5 WAYS TO DECREASE YOUR SHIPPING OPERATION COSTS
In a world where customers are expecting faster (and often free) delivery, businesses are finding it more important than ever to closely manage their ground shipping operations. We take a look at how to address the twin challenges of reducing delivery times while decreasing shipping costs. We'd now like to introduce you to Matt Rundblad, who oversees our Formaspace Customer Service and Shipping Operations. Matt started his career in shipping and

05-06-2019 | Energy & Environment
CAS DataLoggers
Measuring Soil Moisture to Maximize Plant Growth
Infinite ADU-500 RTU Enables Remote Data Collection Measuring soil moisture content is critical in a variety of industries and the inability to collect accurate and reliable data can have far-reaching implications. For example, geologists studying landslide potential, civil engineers designing watersheds or the National Weather Service performing floods prediction all require soil moisture data. And while all of these have impacts on human society none are as critical as the use
04-24-2019 | Health & Medicine
Market Density
Global Soil Humidity Sensors Market Insights, Forecast
The Soil Humidity Sensors market was valued at Million US$ in 2017 and is projected to reach Million US$ by 2025, at a CAGR of during the forecast period. In this study, 2017 has been considered as the base year and 2018 to 2025 as the forecast period to estimate the market size for Soil Humidity Sensors. Get sample copy of the report: https://www.marketdensity.com/contact?ref=Sample&reportid=56425 Table of Contents: Table of Contents 1 Study Coverage
03-22-2019 | Leisure, Entertainment, Miscel …
Austin Macauley Publishers
Breaking Soil at Bologna Children’s Book Fair
Austin Macauley Publishers are Cultivating New Markets in Bologna 2019. Austin Macauley Publishers are heading to the heart of Bologna for the first time in their history, for one of the most unique and encompassing events in Rights Affairs; Bologna Children’s Reading Festival. An exciting jam-packed four-day event from 1st April to 4th April 2019 that focuses on educational and entertaining material for children all around the world. Entering the events 56th
01-31-2017 | Business, Economy, Finances, B …
ReportBazzar
United States Soil Sterilizer Market Report 2021
Summary This report studies sales (consumption) of Soil Sterilizer in USA market, focuses on the top players, with sales, price, revenue and market share for each player, covering MSD GmbH CM REGERO Industries Egedal Maskinfabrik A/S Ferrari Costruzioni Meccaniche Potveer Sierteeltmachines Alvan Blanch Celli Spa Selvatici SIMOX Get Sample Report @ http://www.reportbazzar.com/request-sample/?pid=648767&ptitle=United+States+Soil+Sterilizer+Market+Report+2021&req=Sample Split by product types, with sales, revenue, price, market share and growth rate of each type, can be divided into Type I Type II Type III Split by applications, this report focuses on sales,
05-08-2012 | Business, Economy, Finances, B …
Soil-Away
Soil-Away Expands Roof Cleaning Services
Hooksett, NH – May 1, 2012 – Soil-Away Cleaning and Restoration Services, one of the largest and most well regarded non-franchised cleaning and restoration companies in New England, announces the expansion of their roof cleaning services. Massive demand and positive word-of-mouth has Soil-Away pushing to expand its roof cleaning business. The unique service was first launched over a year ago and had taken off. “People are tired of their
01-03-2012 | Business, Economy, Finances, B …
Soil-Away
Soil-Away launches monthly newsletter email campaign
Hooksett, NH – January 1, 2012 – Soil-Away Cleaning and Restoration Services (www.soilaway.com), one of the largest and most well regarded non-franchised cleaning and restoration companies in New England launches a monthly newsletter email campaign. Soil-Away has recently implemented a monthly newsletter program that will be emailed to clients. Newsletters will update clients on company news, industry trends, and also provide helpful tips to homeowners/property managers. Cleaning services will be
Comments about openPR
I can't but agree to the positive statements about your portal: easy to use, clear layout, very good search function, and quick editing!
Jens O'Brien, Borgmeier Media Communication