More women into digital and IT careers 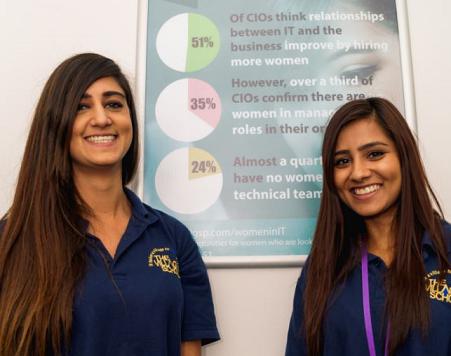 IT and digital jobs are gender-neutral in nature and the employers do not differentiate between male and female while employing them. However, only 17% of IT professionals in the UK are women, but more and more female quotas are needed in the technology sector to fill the skills gap. The problem is particularly acute in technology-focused professions, where it is both difficult to recruit women into technology roles and to encourage them to stay in technology.As a result, several tech-savvy women are being employed and they are achieving great results, such as cleaning marketplace app Hassle.com founder Alex Depledge, and tech startup founder Entrepreneur First Alice Bentinck, who received MBEs for services to the sharing economy and to business, respectively.At 360 GSP we are committed to driving gender diversity in the workplace and we believe that when women are supported, encouraged, and funded to lead, they always excel. Sherran Sirah and Kaajal Bhudia are two of the many students that 360 GSP has successfully trained and placed into the industry in the last 14 years. They did not have any IT background, but they now both work as IT First Line Support Technicians in the education sector. We offered a support network to help and mentor them so that they could progress in a male dominated industry in a bid to tackle this shortage.“I joined 360 GSP about 9 months ago and within 2 months I was already put in touch with a school based in Kingsbury for work experience – Sherran told us -. After I completed the six week work experience they hired me in their IT department on a permanent basis. During that time I continued studying at 360 GSP and I’m now MCSA Certified.” “360 GSP played a key role: I had no IT background and I didn’t know how to configure or troubleshoot and in just two days a week they assisted me and guide me step by step into the IT avenue – Kaajal told us -. They offered me CV building workshops, career advice, interview preparation and real-life work experience. Thanks to 360 GSP I was hired in the IT department of a special needs school and I am now very happy.”The companies that are most successful at recruiting women do not rely on word of mouth or personal contacts to advertise positions, but advertise vacancies as widely as possible, a CEB research revealed. For this reason, our dedicated Recruitment team works alongside organisations across the UK to determine what employers are looking for to ensure that your career path will lead you to securing a job in IT. Our experienced team will work with you every step of the way to guide you through what you need to get working.360 GSP is an IT training centre based in Wembley, London. We have been in the industry since 2003 and placed several candidates with leading Bluechip companies including IBM, Amazon and Goldman Sachs. We are specialised in Computer Networking, Network Security, Virtualization, Infrastructure, VoIP and Other related technologies. We are a Cisco, Microsoft, VMware, IBM and Citrix Partner.360 GSP York House, 21 Empire Way, Wembley HA9 0PA andrea@360gsp.com 020 8672 4151

12-02-2016 | IT, New Media & Software
360 GSP
Women in IT: Ways to Close the Gender Gap
Nowadays, equal opportunity is unthinkable without equal challenge. It is also a fact, however, we now have fewer women working in male-dominated industries such as IT, despite a variety of programmes and political correctness. In reality, since the beginning children are treated differently. While boys are playing with Lego sets, girls received dolls. This trend continues until the university when the general public tries to convince girls that IT is too
11-09-2016 | IT, New Media & Software
360 GSP
Switch careers? Yes, we can
Nowadays, more and more people are unsatisfied with their current job and IT is worth considering for a wide range of reasons. IT is a high growth, high skill, rapidly changing and well-paid occupation that touches every area of the economy. However, switch careers is stressful, but not impossible and starting a new job takes an incredible amount of strength and energy. You just need confidence, courage and – especially

03-25-2019 | Business, Economy, Finances, B …
Songwon Industrial Group
SONGWON Industrial Group welcomes a new member to its Board of Directors
Ulsan, South Korea – March 25, 2019 – SONGWON Industrial Co., Ltd. (www.songwon.com) today announced that Markus Oppliger was appointed to its Board of Directors at SONGWON’s Annual General Shareholders’ Meeting (AGM) held in Ulsan, Korea on March 22. “We are very pleased to have Markus Oppliger join us as the newest member of our Board,” said Maurizio Butti, CEO. “His skills and experience combined with his broad international perspective will
03-20-2019 | Industry, Real Estate & Constr …
SONGWON Industrial Group
Strong partners, SONGWON & SABO mark another milestone in their collaboration
Ulsan, South Korea – March 20, 2019 – SONGWON Industrial Group (www.songwon.com), the 2nd largest manufacturer of polymer stabilizers in the world and Sabo S.p.A. (www.sabo.com), a world leader in the development and manufacturing of hindered amine light stabilizers (HALS), today marked another milestone in their long-term collaboration. SABO’s recently launched its innovative light stabilizer system, SABO®STAB UV216 which was especially developed for tough agricultural applications and offers the industry
10-30-2017 | Tourism, Cars, Traffic
Dataforce Verlagsgesellschaft für Business Informationen mbH
True Fleet partly affected by a general softening of the German Market
After the positive growth figures over the recent months, the True Fleet Market eked out positive for September (+0.1%). This was in line with a general slowdown of all market segments. While the Private Market softened (-0.3%), Special Channels took a notable 7.9% dip and due to the relevance of tactical registrations in Germany led to a decline of the Total Market by -3.3%. Once again, it was diesel continuing
09-20-2017 | Tourism, Cars, Traffic
London Chauffeur
Alexandra Ambrosio welcomed by London Chauffeur to a fashion event
Yesterday, supermodel Alexandra Ambrosio arrived at London Heathrow Airport to join the event London Fashion Week experience with CIROC Vodka. London Chauffeur welcomed Alexandra and other world’s fashion bloggers to attend the special event. Organised by CIROC, Ultra Premium Vodka, the event is to kick off the London Fashion Week Festival and to celebrate the fashion event with all of its fans and fashion stars. The event also welcomed other
08-03-2017 | Health & Medicine
Aurum Julii
Italian Company Aurum Julii Brings 4.0 Technology to Saffron Farming
The organic saffron producer presented its automation projects at the 3rd International Conference on 4th Industrial Revolution in Teheran. In the north-east corner of Italy, saffron producer Aurum Julii combines 4.0 technology and tradition to automate the farming process of one of the most labor-intensive crops. The company recently implemented a transplanting machine that is equipped with a hydraulic gear that can place saffron bulbs at a constant depth and with
06-23-2017 | Tourism, Cars, Traffic
Dataforce Verlagsgesellschaft für Business Informationen mbH
True Fleet in Italy back in black with a positive May
Italian Fleet numbers once again returned to plus, with a good month from all the market channels. Total market finished very close to 212,000 registrations with a 10.3% growth over last May and the year-to-date figures breached the 1,000,000 mark. True Fleets month-on-month was positive to the tune of a + 4.7% and the Private market bounced back well from last month just beating True Fleet growth numbers with a
Comments about openPR
OpenPR ist the nicest and most clearly laid out PR platform I have seen to this day. The press releases are displayed very nicely and clearly and without any unnecessary frills. The updates are fast and the finished release looks appealing and is clearly legible. Even with 16 years of experience one discovers new things from time to time. Congratulations!
Gabriele Ketterl, Director Marketing & PR, Menads