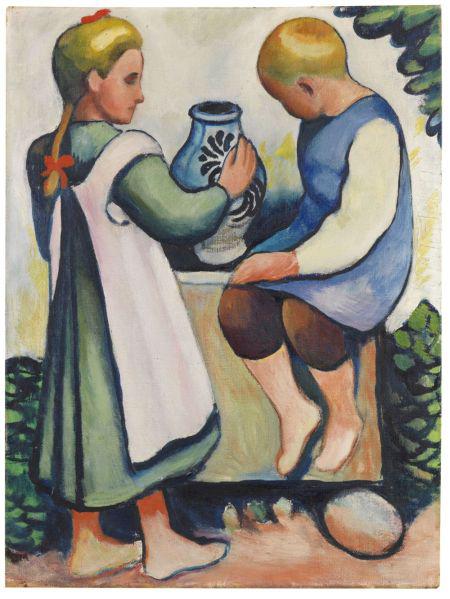 Munich, 27 October 2016 (kk) – August Macke surely paid the ducal brewpub on Tegernsee one or the other visit. In 1910 he painted the children of the brewing assistant Meier, who lived in the same neighborhood as the Macke family. The inimitable oil painting will be called up with an estimate of EUR 300,000-400,000 in the auctions at Ketterer Kunst in Munich from 8 - 10 December 2016.This work is one of two versions August Macke made. “Kinder am Brunnen I“ used to be part of the acclaimed collection of Bernhard Köhler, who was an early patron of August Macke and Franz Marc. This version, however, was de-stroyed in an air raid on Berlin in World War II. 1910, the year of origin of the work, was of crucial importance for August Macke's oeuvre, as he had just found the peace necessary to unfold his artist personality in the calm of the Tegernsee region. Works from these days are characterized by a tremendous clarity, as this oil painting shows in a most wonderful way. What else is particularly charming is the compelling arrangement of the composition. The girl in left with both feet on the ground holds the jug with a firm hand, while the boy sitting rim of the well in right seems to rest his eyes on the water's surface. Macke captures the characters in their surrounding almost like in a still life. This way the contemplative basic concept that the work emanates remains undisturbed. One of the other top lots in the section of Modern Art is Emil Nolde's oil painting “Figur und Clematis“ that has been estimated with EUR 500,000-700,000. The artist rendered plant and object in a subtle dialog, with great ingenuity he created a very special magical drawing power that also comes to life in the color explosions of his watercolors. The deep blue into which the “Landschaft (Marschlandschaft in der Dämmerung)“ is immersed or the lucent red of “Schwüler Abend“ (EUR 100,000-150,000 and EUR 70,000-90,000) are especially captivating.The colors' radiant powers are at the core of Hermann Max Pechstein's oil painting ”Rote Häuser“. The small-size work from 1932 has been estimated with EUR 200,000-300,000 and is offered on the art market for the first time. The coloring of “Wintermorgen” (estimate: EUR 80,000-100,000), on the contrary, is rather modest leaning towards more objectiveness.A balanced coloring is also a characteristic trait of Gabriele Münter's oil painting ”Murnau, Hauptstrasse am Sonntag im Mai“ from 1924. This composition's unusual dynamic is accounted for by the bold perspective, with an estimate of EUR 140,000-180,000 it is guaranteed to make for some excitement in the salesroom. Alongside Georg Schrimpf's oil painting “Im Hof/Geschwister“ (estimate: EUR 80,000-120,000), and several lots by Otto Dix, Karl Hofer, Ernst Ludwig Kirchner and Paul Klee, other fascinating works come from, among others, Cuno Amiet, Auguste Herbin, Alexej von Jawlensky, Wassily Kandinsky, Otto Mueller, Georg Tappert, Marianne von Werefkin and Eugeniusz Zak Works from the departments of Post War and Contemporary Art, also called up in the auctions from 8-10 December in Munich, are presented in a separate press release.Previews in Germany and Switzerland: 03-05 November, Ketterer Kunst, Holstenwall 5, 20355 Hamburg* 08/09 November, Galerie elten & elten, Wilfriedstr. 19, 8032 Zurich, CH* 14/15 November, Galerie Schwind, Fahrgasse 8, 60311 Frankfurt* 18-21 November, Ketterer Kunst, Malkastenstr. 11, 40211 Dusseldorf* 25 Nov - 02 Dec., Ketterer Kunst, Fasanenstr. 70, 10719 Berlin* 04 - 09 December, Ketterer Kunst, Joseph-Wild-Str. 18, 81829 Munich** * selected works ** all worksAuction in Munich: Modern Art / POST WAR /Contemporary Art from 8-10 DecemberSince it was founded in 1954, Ketterer Kunst has been on the forefront of auction houses dealing in Fine Art and Rare Books, with its headquarters in Munich, and a branch in Hamburg. Representatives' offices in Berlin, Heidelberg, Duesseldorf, in the Benelux Union, France, Italy, Switzerland, as well as in the USA have contributed substantially to the company's success. In addition, exhibitions, special thematic and charity auctions as well as monthly online auctions at www.ketterer-internet-auction.com are regular events at Ketterer Kunst. Robert Ketterer is owner and CEO of Ketterer Kunst.Press inquiries: Ketterer Kunst Joseph-Wild-Str. 18 81829 München Michaela Derra M.A. Telefon: +49-(0)89-55244-152 Fax: +49-(0)89-55244-177 E-Mail: m.derra@kettererkunst.de www.kettererkunst.de Client inquiries:Ketterer Kunst Joseph-Wild-Str. 18 81829 Munich Tel. +49-(0)55244-444 Fax.: +49-(0)55244-177 E-mail: infomuenchen@kettererkunst.de

02-05-2019 | IT, New Media & Software
Archiware GmbH
Archiware delivers professional Archive and Backup for 1,000 EUR
Archiware GmbH, manufacturer of the media-focussed data management software suite Archiware P5, now offers the new, affordable P5 Desktop Edition. The new license bundle caters to small teams and single users willing to professionally archive their media. Director and DOP Anton Nelson showcases what the P5 Desktop Edition can do in a beautiful testimonial. Munich, February 4th, 2019 - Keeping media safe is crucial in media production – be it raw
10-30-2013 | IT, New Media & Software
Onlineprinters GmbH
onlineprinters.com invests more than EUR three million in production
New 8-colour offset printing press expands online print shop's capacity Neustadt an der Aisch, Germany – By investing more than EUR three million, Onlineprinters, the internationally operating online print shop, has expanded the production facilities at its German site. Extra offset printing capacity was added in September with the purchase of a new state-of-the-art 8-colour printing press, the Heidelberger Speedmaster XL 106-8P, including a new CTP system for digital printing plate
07-17-2012 | Health & Medicine
Otto Bock HealthCare GmbH
EUR 155,000 for Safe Zones Project
Eichsfeld Festival Attracts 25,000 Music Fans to Downtown Duderstadt "Tonight is going to rock!" It was with these words that initiators Professor Hans Georg Näder and Peter Maffay opened the 2012 Eichsfeld Festival this past Saturday. Around 25,000 music fans followed the invitation to experience top-class live performances in the Marktstraße of Duderstadt that day. Peter Maffay, Ich + Ich and four regional special guests did more than just wow the
01-18-2012 | Business, Economy, Finances, B …
Clariant International Ltd
Clariant successfully issues EUR 500 million Eurobond
Muttenz, January 17, 2012 – Today, Clariant successfully priced an Eurobond transaction of EUR 500 million with a tenor of 5 years, issued by Clariant Finance (Luxembourg) S.A. and guaranteed by Clariant Ltd. The fixed rate notes with a minimum denomination of EUR 100,000 and a final coupon of 5 ⅝ % p.a. are maturing on January 24, 2017. The orderbook was significantly oversubscribed on the back of strong investor demand.
12-10-2011 | IT, New Media & Software
VSHosting
VSCloud – cloud services from 0.78 EUR per day
On 15th of August, at a press conference, the unique cloud project named VSCloud was presented which provides cloud services of IaaS (Infrastructure as a Service) type. After three months, VSCloud can boast with hundreds of active users mainly from the Czech Republic and Slovakia. The leadership of VSCloud foresees that the number of first thousand active users will be surpassed by the end of this year. What are the advantages
02-08-2008 | Energy & Environment
Continuing Education Center der TU Wien
“Die Presse” Scholarship in the amount of EUR 15000
MSc Program Environmental Technology and International Affairs The shortage of environmental resources and the dealing with pollution are challenges which the international society of the 21st century has to face. Climate change, water shortage and air pollution are only some of the problems which have to be solved. The purpose of a sustainable development can be reached only if decision makers dispose of a comprehensive education. The cooperation between the Vienna University
Comments about openPR
9 o'clock: discuss press release with client, 10 o'clock: submit release to openPR, within the briefest possible time release is published and displayed in a prominent place on openPR.de. I am thrilled!
Zehra Spindler, Calypso Now! - Communication Agency