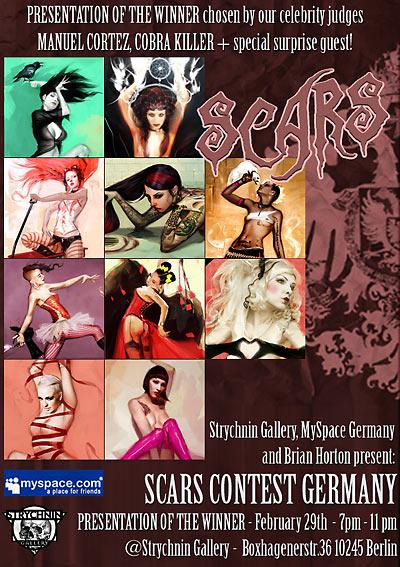 Strychnin Gallery, MySpace Germany and Brian Horton present the winner of the Scars Contest Germany on February 29th, beginning at 7 pm. “You are female, you enjoy art and you’ve always wanted a painter to portray you in oil?” This is the question that Berlin’s Strychnin Gallery and the international friend platform MySpace posed on MySpace in September. Countless women and young girls applied to be painted in oil by Brian Horton. Brian Horton’s drawings of the ten finalists will be presented to the public for the first time at the opening of the Scars exhibition. A jury consisting of actor Manuel Cortez (“Verliebt in Berlin”), the band Cobra Killer and a surprise guest has chosen the winner out of these ten finalists, who has been painted in oil by Brian Horton – this oil painting will now be revealed to the public in the artist’s first Berlin solo show. Brian Horton is fascinated by the MySpace culture which allows its members to create alter-egos and present themselves as self-constructed artificial personalities. The ten finalists have names such as Miss Synthetic Candy, Toxica or Clea Cutthroat; Brian Horton is interested in the stories behind these names. One of his works’ central themes is trauma and how to work through it, hence the name Scars. Says Brian Horton: “A scar by definition has negative connotations, but I see them as a reminder of life lived. We're born with a wound on our abdomen, evidence of our first trauma and our body continues to document experiences both physically and psychologically throughout life.” Horton is also interested in piercings and tattoos as documentation of certain events in our lives, which is why the female pop icons of his work are often vulnerable despite their strength and also show us their sensitive side. Brian Horton has been well-known for his work on comics with such famous publishers as DC Comics or Dark Horse Comics, where he has among others worked on the Bat Man and Star Wars Series. Famous among comic collectors, his work on graphics for the gaming industry on video games such as Medal of Honor, Clive Barker’s Undying or the legendary classic Indiana Jones and the Emperor’s Tomb finally brought him to the art world, where he quickly gained recognition for his portraits. Opening: February 29th, 7 pm – 11pm. Show runs until March 10th @Strychnin Gallery Berlin, Boxhagenerstr. 36, 10245 Berlin Owner: Yasha Young yasha@strychnin.com Contact: Iris Bitter// Public Relations Phone: +49 160 915 15 965 // Mail: production@strychnin.com Open: Thu - Sun from 1-6 pm and by appointment www.strychnin.com www.myspace.com/scarscontestgermany With galleries in three bustling hotspots – New York City, Berlin, and London – Strychnin Gallery is a playground for artists from all around the globe. It is a place where collaboration is encouraged, new projects are constantly developed and creativity is the one and only thing that truly counts. Owned by charismatic curator Yasha Young, Strychnin is dedicated to presenting emerging American artists to the European art world and vice versa. It features a variety of artists with particular individual styles rather than artists belonging to a collective “hip” movement. If you insist on putting a label on them, try lowbrow turned highbrow, pop surrealism or fantastic realism among others. Founded in Brooklyn in 1998, the gallery opened a European showroom in Berlin in 2002. The US gallery has since moved to a location in Manhattan’s Chelsea district, opening with a group show featuring over 70 artists in October of 2006. Strychnin opened a third location in East London’s vibrant art scene right off of Brick Lane in October 2007.

04-04-2019 | Science & Education
QY Research, Inc.
Emergency Ambulance Market Analysis & Trends to 2025| TOYOTA, Horton, NISSAN, Le …
The report comes out as an intelligent and thorough assessment tool as well as a great resource that will help you to secure a position of strength in the global Emergency Ambulance market. It includes Porter’s Five Forces and PESTLE analysis to equip your business with critical information and comparative data about the Global Emergency Ambulance Market. We have provided deep analysis of the vendor landscape to give you a
02-26-2019 | Leisure, Entertainment, Miscel …
CONRIC PR & Marketing
D.R. Horton opens three stunning new model homes at Lindsford
Homebuyers can catch a glimpse of paradise as they tour three new professionally decorated model homes in a premier gated community. Each beautiful home at D.R. Horton Southwest Florida’s Lindsford community is brimming with designer accents, upgrades and features, perfect for families and individual homebuyers alike. The stylish collection of models features the Cali, Destin and Delray plans, with living spaces ranging from 1,828 to 2,368 square feet. The Cali
12-10-2018 | Business, Economy, Finances, B …
Supply Demand Market Research
Global Automatic Doors Market Comprehensive Study 2025: Stanley, Horton Automati …
Automatic door is powered open and closed either by electricity, spring, or both while a person or a vehicle passing through it. Automatic door is always used in high-end hotels, large super markets, high-end office buildings, garages, banks, and other infrastructures (such as airports, stations, etc.). It makes the building more elegant and makes their customers feel more convenient and satisfied. This research report provides detailed analysis of Automatic
06-22-2018 | Advertising, Media Consulting, …
MarketResearchReports.biz
Hadoop Market - Cloudera, Horton Works, IBM, Pentaho
MarketResearchReports.Biz adds “Global Hadoop Market Share, Size, Trends and Forecast Market Research Report” reports to its database. This report provides a strategic analysis of the Hadoop market and the growth estimates for the forecasted period. The main objective of this report is to aid the user in understanding the market as a whole, its definitions, segmentation, market potential, influential trends, and the barriers that it is facing. Meticulous research and analysis
05-25-2018 | Industry, Real Estate & Constr …
Easters Lock & Security Solutions
Easter’s Lock & Security Solutions and Horton Automatics Announces Strategic P …
Locally owned Easter’s Lock & Security Solutions a 65+ year old company and Maryland’s largest independently owned provider of physical security announced today that it has been named by Horton Automatics the worldwide leader of commercial & institutional automatic doors and operators as their factory authorized dealer for the Mid-Atlantic Region for the sales, service, and installation of their product line throughout Maryland, Washington D.C., and Northern Virginia. “We are
03-22-2017 | Logistics & Transport
Market Report
Emergency Ambulance Market 2017- TOYOTA, Horton, NISSAN, Leader Ambulance
Emergency Ambulance Market 2017 Industry research report provides important information to identify and analyze the market need, market size and competition. This market research report used in maintaining competitiveness over competitors. “Emergency Ambulance is a medical vehicle which is used to transport and rescue patients. Scope of the Report: This report focuses on the Emergency Ambulance in Global market, especially in North America, Europe and Asia-Pacific, South America, Middle East and Africa.
Comments about openPR
We publish our press releases on openPR.de because we like people who are "open" - just like us.
Frank Obels, CEO, INCONET - Informationssysteme, Communication und Netzwerkberatung GmbH