Do You Nomi? A group exhibition celebrating the art and music of Klaus Nomi 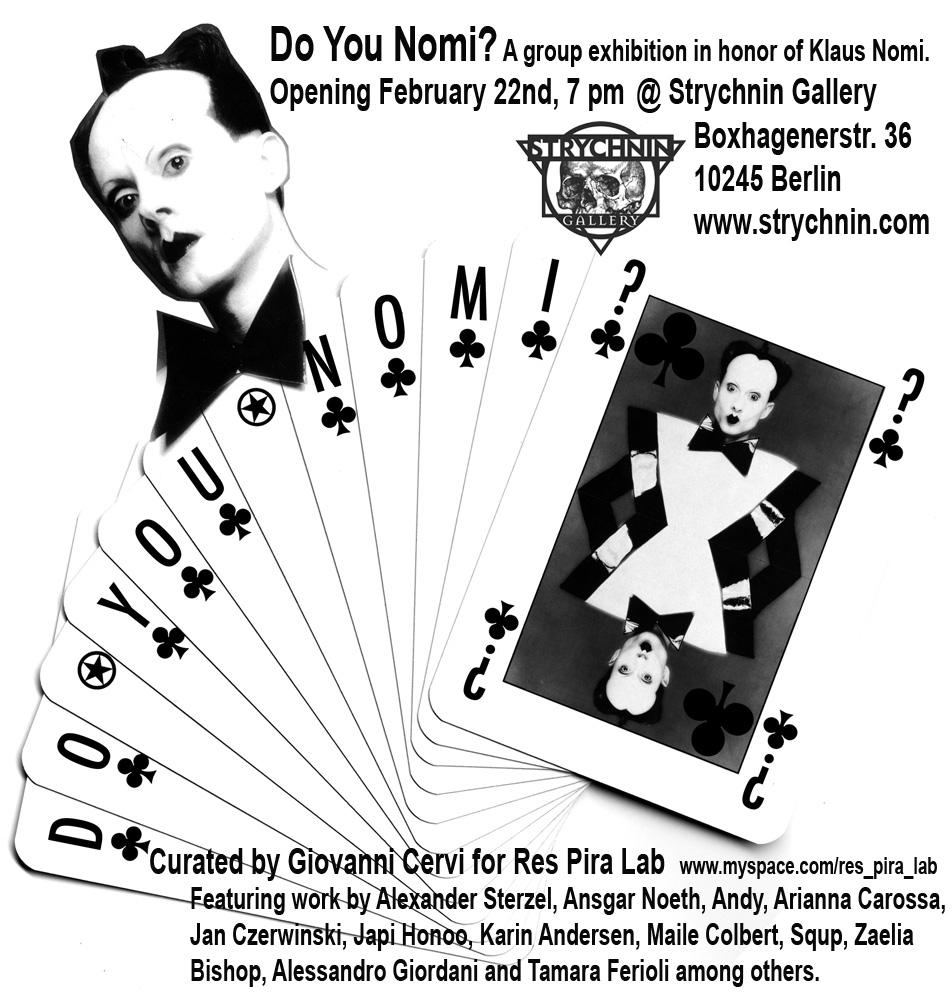 Opening at Strychnin Gallery Berlin on February 22nd, 2008, 7 pm, Res Pira Lab and Strychnin Gallery present an exhibition dedicated to German singer and performer Klaus Nomi. With his visionary performance art and black and white make-up, countertenor Klaus Nomi was a highly influential New Wave figure. Although he was famous in his lifetime – especially in Paris and New York, where he influenced David Bowie – Nomi died before achieving an international breakthrough. One of the first well-known figures to die of AIDS, he remains a highly influential figure even 25 years after his death. Curated by Giovanni Cervi for Res Pira Lab, this artistic event is the continuation of a Nomi celebration that started in 2007 with a tribute party held in Parma in April, and an exhibition at Galleria Aus18, Milan, in September of the same year. The project involves some 50 international visual artists and musicians so far; 13 of them will be showing their work in Berlin. Background: Klaus Nomi, whose real name was Klaus Sperber, was born in Immenstadt, Germany, in 1944. After two apprenticeships, one as a pastry chef and one as a classically trained opera singer, he moved to New York’s vibrant East Village in the early 1970s to find his own style. He was a master of scene handling and a sharp performer, an artist able to fuse together the world of fashion, opera, disco music and futuristic rock imagery. His style was a fascinating mixture of New Wave, Dadaism and classical opera, completed by cubist costumes. After his discovery through David Bowie, Nomi quickly gained popularity but died of AIDS in 1983, his breakthrough before his very eyes – by then, New Wave had become a mainstream phenomenon. Klaus Nomi was an alien angel, lost somewhere between German expressionist cabaret and Kabuki theater, an artist shaped by Fritz Lang’s futuristic visions of the 1920s. He created a brand new way of performing, shaking the imagination of his disciples who continue in his style even today, not only in music. The following artists will be showing their work in the “DO YOU NOMI?” show: Alexander Sterzel, Ansgar Noeth, Andy, Arianna Carossa, Chris von Steiner, Jan Czerwinski, Japi Honoo, Karin Andersen, Maile Colbert, Squp, Zaelia Bishop and, courtesy of Galleria Aus18, Alessandro Giordani and Tamara Ferioli. Opening: February 22nd, 7 pm – 11pm. @Strychnin Gallery Berlin, Boxhagenerstr. 36, 10245 Berlin Owner: Yasha Young yasha@strychnin.com Contact: Iris Bitter// Public Relations Phone: +49 160 915 15 965 // Mail: production@strychnin.com Open: Thu - Sun from 1-6 pm and by appointment www.strychnin.com www.myspace.com/res_pira_lab With galleries in three bustling hotspots – New York City, Berlin, and London – Strychnin Gallery is a playground for artists from all around the globe. It is a place where collaboration is encouraged, new projects are constantly developed and creativity is the one and only thing that truly counts. Owned by charismatic curator Yasha Young, Strychnin is dedicated to presenting emerging American artists to the European art world and vice versa. It features a variety of artists with particular individual styles rather than artists belonging to a collective “hip” movement. If you insist on putting a label on them, try lowbrow turned highbrow, pop surrealism or fantastic realism among others. Founded in Brooklyn in 1998, the gallery opened a European showroom in Berlin in 2002. The US gallery has since moved to a location in Manhattan’s Chelsea district, opening with a group show featuring over 70 artists in October of 2006. Strychnin opened a third location in East London’s vibrant art scene right off of Brick Lane in October 2007.

You can edit or delete your press release Do You Nomi? A group exhibition celebrating the art and music of Klaus Nomi here