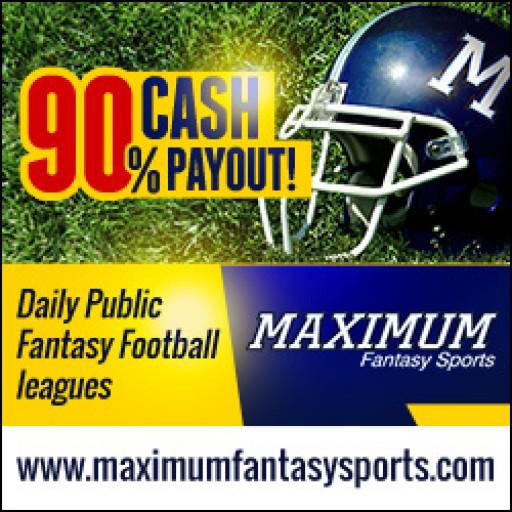 Maximum Fantasy Sports (www.maximumfantasysports.com) currently offers DFS leagues unique to the industry, such as their 4-Week Frenzy leagues (Monthly Fantasy Football leagues). However, their unique configuration options even make their way into some of their standard leagues, whether those are Private fantasy football leagues or their Weekly and Daily Fantasy Football Leagues. One such option is currently being offered in their Monthly Fantasy Football leagues. Since the NFL Bye Week season is so long, it makes it difficult to run certain contests during those weeks. In their monthly leagues, MFS offers a Bye Week Rollover option. This option makes drafting players with upcoming Bye Weeks useful, or even more attractive. Players with Bye Weeks in week 7 could be drafted in Week 6 and optioned to roll whatever points they score in Week 6 over as their score in Week 7. This is definitely a boon-or-bust approach to filling out a lineup for Week 7, but it does put an interesting twist to how a team builds its lineup. Imagine being able to start Cam Newton versus the sieve that is the Saints’ defense this week and get the same number of points for your starting QB next week! Now, in Weekly and Daily Fantasy Football leagues, Bye Weeks are non-factors in a silo as there is no prior week to roll-over from, but there is still the concern of having a starting player go down to injury. Whenever a player is lost during a game, his fantasy points stop accumulating, providing a difficult barrier to victory, especially if lost early in his game. Maximum Fantasy Sports provides leagues with options to populate a bench and being able to swap in a new player to fill in the remaining half or quarters of a starting position occupied by a player who is underperforming or injured. Having a bench in DFS is unique to MFS. “The normal fantasy sports participant is actively connected to their fantasy leagues and is aware of the up-to-the-moment performance and injury status of their players. Player news is easily accessible through text updates, sideline reporters and Twitter so we want to provide our players with the opportunity to stay competitive until their contest is over.” stated Bill Parsons, President of Maximum Fantasy Sports.Full descriptions of these leagues can be found on their website’s Public League ruleset. Maximum Fantasy Sports leagues are commonly built using a Live Online Draft and not a salary cap, which means that an NFL player is only owned once within a contest. MFS mitigates any concerns with this approach by keeping the number of teams per contest lower than a full-season league so teams can start a full roster of NFL starters. Using an Online Draft and keeping the number of participants low helps take out the risk often found in Daily Fantasy Sports leagues where the majority of the cash contests are won by a minority of the players who regularly play, often referred to as “Sharks”. Available fantasy football leagues are found on the company’s Open Leagues page with their entry fee and available draft times.Maximum Fantasy Sports ("MFS") is an online fantasy football league provider. Maximum Fantasy Sports provides the opportunity for league members to configure private fantasy football leagues (free and pay) and/or join public fantasy football leagues (free and cash prizes). Public fantasy football leagues run Daily, Weekly, Monthly as well as the Full regular season. In addition, it also offers free NFL Confidence Pools, Pick 'em Pools, Survivor Pools and Square Pools.The flexibility of the league configuration options is what separates MFS from every other fantasy football provider. MFS has options that no one company has and has more flexibility in many of the options that are shared across the industry. http://www.maximumfantasysports.com/features.aspx. These can be used in Commissioner leagues and are also used for variety in some of the various public leagues offered for short-term or season-long leagues.In addition to offering its own fantasy football leagues, MFS offers a White Labeling service for other companies to offer a fantasy football product without the cost of development and processing. MFS has also built a sports social network.Bill Parsons Maximum Fantasy Sports 3501 N. Southport Ave #104 Chicago, IL 60657 http://www.maximumfantasysports.com customer_relations@maximumfantasysports.com

06-06-2017 | Leisure, Entertainment, Miscel …
www.hotelmarineplaza.com
World Environment Week 2017
Every year in the 1st week of June, Hotel Marine Plaza celebrates “World Environment week” with full enthusiasm. The day is celebrated globally on June 5 to raise awareness to take positive environmental action to protect nature and the planet Earth. It is run by the United Nations Environment Programme (UNEP). Mr. Sanjeev Shekhar, GM, Hotel Marine Plaza says “Our environment week celebration is very close to Hotel Marine
05-02-2016 | Leisure, Entertainment, Miscel …
www.hotelmarineplaza.com
Mom’s week!
Celebrate Mom at Hotel Marine Plaza! Weeklong celebration to the wonderful mum. 1. Mom & Me cookery class on 6th May 2016, 3pm: Enjoy a beautiful demonstration style cooking class and learn some finely crafted snacks with our young Master Chef Ms. Sharvari Patil along with her mother Vaishali Patil. Entry is absolutely free for a mother & child (*Child above 12years age) Registration Required! 2. Dine with your mom on 8th May 2016:
02-29-2016 | Energy & Environment
Global Pacific & Partners
23rd Africa Oil Week
While the African Continent continues to attract a steady stream of oil and gas commitments in its fast-growing oil, gas-LNG and energy industry, our landmark Africa Oil Week 2016 event will again showcase Africa’s Governments, National Oil Companies, Licensing Agencies and corporate players shaping the continent’s future – in exploration and production/development, across new frontiers and established basins; onshore in the Rifts and offshore in the shelf and deep-water, providing
09-05-2014 | Health & Medicine
Relaxa UK Limited
Backcare Awareness Week 2014
Employee Backcare Awareness Week is running from the 6th – 10th October 2014. Relaxa & Posture Group are offering a range of back care health packages from as little as £259 AND / OR online posture training from £1 per user, incorporating a range of backcare health promotion activities for all your staff. This year the National campaign is on office workers. Relaxa employs a team of more than 1,000
09-04-2013 | Business, Economy, Finances, B …
Power Public Relations, LLC
BenefitMall Celebrates National Payroll Week
Dallas) September 2, 2013 – BenefitMall®, the leading provider of the nation’s largest portfolio of employee benefits, HR and payroll products and services, recognizes National Payroll Week (NPW) 2013, which celebrates the hard work by America’s 156 million wage earners and the payroll professionals who disburse their paychecks. BenefitMall recognizes its employees, customers and the industry. National Payroll Week was started by the APA (American Payroll Association) in 1996 to recognize
11-07-2008 | Fashion, Lifestyle, Trends
Nolcha
Independent Retail Week: NYC
NYC offers a week of Fashion, Style and Beauty for the Holiday Season! Date: November 17th – 23rd 2008 Place: New York City Holiday shoppers will be spoilt for choice as some of New York City’s best independent stores in fashion, accessories and beauty will be opening their doors with an incentive of 20% discount off of select collections and services. In addition an exclusive calendar of events will be available for shoppers
Comments about openPR
OpenPR ist the nicest and most clearly laid out PR platform I have seen to this day. The press releases are displayed very nicely and clearly and without any unnecessary frills. The updates are fast and the finished release looks appealing and is clearly legible. Even with 16 years of experience one discovers new things from time to time. Congratulations!
Gabriele Ketterl, Director Marketing & PR, Menads