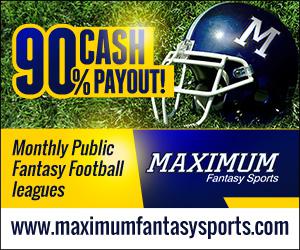 Maximum Fantasy Sports (www.maximumfantasysports.com) is offering Monthly Fantasy Football Leagues alongside their Daily and Weekly Fantasy Football Leagues with cash payouts. Though there is an obvious connection between “MFS” and the company name abbreviation, the company prefers to label these leagues as “4-Week Frenzy” leagues. Full descriptions of these leagues can be found on their website’s Public League ruleset. Monthly leagues operating within the NFL’s Bye Week season would definitely provide an additional challenge when drafting a team. It appears that Maximum Fantasy Sports handles this by keeping the number of teams per league lower than a full-season league to have a better populated Waiver Wire. Additionally, they offer their 4-Week Frenzy leagues with a Bye Week Rollover option. That option allows a team to choose to use a player’s performance the week before their Bye Week and get credit for their score for that week and the Bye Week. “While Daily and Weekly fantasy football seasons get the most press coverage, many fantasy sports participants are not interested in this singular event. Providing a monthly league option gives a short-term alternative to those who prefer season-long leagues but aren’t happy with the success of those teams. It is more appealing for those not interested in DFS leagues to join a 4-Week Frenzy league when their season-long team(s) takes a nosedive.” said Bill Parsons, President of Maximum Fantasy Sports. Being a short-term league, the total points accumulated by the starting lineups form the basis for the standings versus won/loss records commonly found in head-to-head leagues. These leagues are built using a Live Online Draft and not a salary cap. Using a draft and running for multiple weeks helps take out the risk often found in Daily Fantasy Sports leagues where the majority of the cash contests are won by a minority of the players who regularly play, often referred to as “Sharks”. These leagues are found on the company’s Open Leagues page.Maximum Fantasy Sports ("MFS") is an online fantasy football league provider. Maximum Fantasy Sports provides the opportunity for league members to configure private fantasy football leagues (free and pay) and/or join public fantasy football leagues (free and cash prizes). Public fantasy football leagues run Daily, Weekly, Monthly as well as the Full regular season. In addition, it also offers free NFL Confidence Pools, Pick 'em Pools, Survivor Pools and Square Pools.The flexibility of the league configuration options is what separates MFS from every other fantasy football provider. MFS has options that no one company has and has more flexibility in many of the options that are shared across the industry. http://www.maximumfantasysports.com/features.aspx. These can be used in Commissioner leagues and are also used for variety in some of the various public leagues offered for short-term or season-long leagues.In addition to offering its own fantasy football leagues, MFS offers a White Labeling service for other companies to offer a fantasy football product without the cost of development and processing. MFS has also built a sports social network.Maximum Fantasy Sports 3501 N. Southport Ave Chicago, IL 60657 Bill Parsons 773.531.4294

You can edit or delete your press release The New DFS: Monthly Fantasy Football Leagues here

06-06-2017 | Leisure, Entertainment, Miscel …
www.hotelmarineplaza.com
World Environment Week 2017
Every year in the 1st week of June, Hotel Marine Plaza celebrates “World Environment week” with full enthusiasm. The day is celebrated globally on June 5 to raise awareness to take positive environmental action to protect nature and the planet Earth. It is run by the United Nations Environment Programme (UNEP). Mr. Sanjeev Shekhar, GM, Hotel Marine Plaza says “Our environment week celebration is very close to Hotel Marine
05-02-2016 | Leisure, Entertainment, Miscel …
www.hotelmarineplaza.com
Mom’s week!
Celebrate Mom at Hotel Marine Plaza! Weeklong celebration to the wonderful mum. 1. Mom & Me cookery class on 6th May 2016, 3pm: Enjoy a beautiful demonstration style cooking class and learn some finely crafted snacks with our young Master Chef Ms. Sharvari Patil along with her mother Vaishali Patil. Entry is absolutely free for a mother & child (*Child above 12years age) Registration Required! 2. Dine with your mom on 8th May 2016:
02-29-2016 | Energy & Environment
Global Pacific & Partners
23rd Africa Oil Week
While the African Continent continues to attract a steady stream of oil and gas commitments in its fast-growing oil, gas-LNG and energy industry, our landmark Africa Oil Week 2016 event will again showcase Africa’s Governments, National Oil Companies, Licensing Agencies and corporate players shaping the continent’s future – in exploration and production/development, across new frontiers and established basins; onshore in the Rifts and offshore in the shelf and deep-water, providing
09-05-2014 | Health & Medicine
Relaxa UK Limited
Backcare Awareness Week 2014
Employee Backcare Awareness Week is running from the 6th – 10th October 2014. Relaxa & Posture Group are offering a range of back care health packages from as little as £259 AND / OR online posture training from £1 per user, incorporating a range of backcare health promotion activities for all your staff. This year the National campaign is on office workers. Relaxa employs a team of more than 1,000
09-04-2013 | Business, Economy, Finances, B …
Power Public Relations, LLC
BenefitMall Celebrates National Payroll Week
Dallas) September 2, 2013 – BenefitMall®, the leading provider of the nation’s largest portfolio of employee benefits, HR and payroll products and services, recognizes National Payroll Week (NPW) 2013, which celebrates the hard work by America’s 156 million wage earners and the payroll professionals who disburse their paychecks. BenefitMall recognizes its employees, customers and the industry. National Payroll Week was started by the APA (American Payroll Association) in 1996 to recognize
11-07-2008 | Fashion, Lifestyle, Trends
Nolcha
Independent Retail Week: NYC
NYC offers a week of Fashion, Style and Beauty for the Holiday Season! Date: November 17th – 23rd 2008 Place: New York City Holiday shoppers will be spoilt for choice as some of New York City’s best independent stores in fashion, accessories and beauty will be opening their doors with an incentive of 20% discount off of select collections and services. In addition an exclusive calendar of events will be available for shoppers
Comments about openPR
OpenPR is clearly structured and remains true to its principle of confining itself to the essential parts. OpenPR has proven to be a very good and reliable partner to our media agency: Within the shortest time the releases are online and go down well with the media representatives. The success of OpenPR is reflected in the steadily increasing number of press releases. It is good that OpenPR exists!
Ursula Koslik, Director Marketing & PR, F+W Hamburg