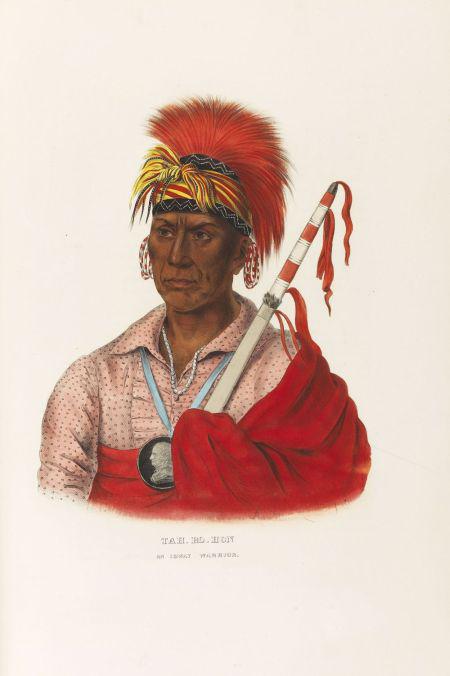 Hamburg, 21 September 2016 (kk) – It must be one of the finest works on North American natives. On 21/22 November the unique “History of the Indian tribes of North America“ by Thomas McKenney and James Hall will be called up in the auction of Rare Books at Ketterer Kunst with an estimate of EUR 20,000. The very rare edition comprises 80 splendid color portraits of chiefs, warriors and women, among them Pocahontas, as well as bison hunting scenes and war dances. Published in 1873, the second folio edition with the exquisite plates is a precious pictorial document of North American natives from the early 19th century. Great poets such as Friedrich Schiller, who quotes from a poem by Gottfried August Bürger about the pursuit of happiness, made their contributions to Georg Wilhelm Prahmer's Album amicorum. The theologist's distinguished album has entries from acclaimed scholars from almost all important German centers of intellectual life at around the time of the French Revolution, among them names like Matthias Claudius, Johann Gottfried Herder, Friedrich Gottlob Klopstock and Christoph Martin Wieland. It has also been estimated at EUR 20,000. Longer than Friedrich Schiller's entry in Prahmer's Album amicorum is a manuscript fragment by the poet from the corrected version of his translation of Jean Baptiste Racine's tragedy “Phaedra“, it is one of just a few dramas preserved as manuscript. After Schiller's death his souvenirs were in high demand, which presumably is the reason why his descendants decided to cut the few preserved original texts up and to give the fragments to the admirers of the deceased poet. The estimate for the fragment from 1804 is at EUR 25,000.The work “Beytrag zur Naturgeschichte der vierfüssigen Thiere“ from Joachim Spalowsky is offered with an estimate of EUR 35,000. The only edition of the complete and splendid work on natural history, published in two volumes, by the Viennese physician is of utmost rareness. Additionally, it is a dedication copy for Charles Theodore, Elector of Bavaria and his wife. Next to Maria Sibylla Merian's gorgeous illustrated book “Surinaamsche Insecten“ from 1730 (estimate: EUR 40,000) the first edition of the famous travelog “Voyage de découvertes aux Terres australes“ by the physician and natural scientist François Auguste Péron is another top lot in the auction. It was released in three volumes between 1807 and 1816. Together with the naturalist and painter Charles-Alexandre Lesueur, who made more than 2,000 drawings, Péron documented more than 100,000 zoological species on a French expedition to the South Seas under Nicola Baudin. Some 2,500 species had been unknown until then. The estimate for this well-preserved copy from the library of the Grand Duke of Oldenburg is at EUR 12,000.The same price has been estimated for the very rare first edition of the “Summa Johannis“, the German translation of the “Summa confessorum“ by Johannes von Freiburg from 1472. The “Summa“ is considered the highlight of penance literature. It comprises a catalog of sins and the respective ecclesiastical disciplines.The range of offerings is topped off by, among others, an interpretation of the “Gospel of Matthew“, a portfolio by Otto Dix from 1961 (estimate: EUR 12,000) as well as Gottfried Benn's very rare and only edition of “Zweiundzwanzig Gedichte“ (estimate: EUR 20,000), an illegal publication that Benn had printed towards the end of the war despite the ban to write that had been imposed on him. He gave the work to only nine close friends and relatives.Next to Rare Books, Manuscripts, Autographs and Decorative Prints the auction also comprises the section Maritime and North German Art. While the latter comes up with, among others, works by Friedrich Kallmorgen (“Der Brief aus Amerika (I)“, estimate: EUR 4,000) and Paula Modersohn-Becker “Die Frau mit der Gans“, estimate: EUR 2,500), the section of Maritime Art has works like Anton Erik Christian Thorenfeld's “Die Küste mit Schiffen auf See“ (estimate: EUR 2,800) and Anton Melbye's “Dampfsegler und Dreimaster auf bewegter See“ (estimate: EUR 2.500) on offer.Previews in Germany select works: 3 November, Ketterer Kunst, Malkastenstr. 11, 40211 Dusseldorf 8 November, Ketterer Kunst, Fasanenstr. 70, 10719 Berlin 19. November, Ketterer Kunst, Joseph-Wild-Str. 18, 81829 Munichall works: 9-11/14-18 Nov., Ketterer Kunst, Holstenwall 5, 20355 HamburgAuction 21/22 November, Ketterer Kunst, Holstenwall 5, 20355 Hamburg, GermanySince it was founded in 1954, Ketterer Kunst has become established as one of Germany's biggest auction houses dealing in Fine Art and Rare Books, with its headquarters in Munich and a branch in Hamburg. Representative offices in Berlin, Heidelberg, Dusseldorf, the Benelux Union, France, Italy and Switzerland, as well as in Los Angeles (USA) have substantially contributed to the company's success. In addition, exhibitions, special thematic and charity auctions, as well as monthly online auctions at www.ketterer-internet-auction.com are regular events at Ketterer Kunst. Robert Ketterer is owner and CEO of Ketterer Kunst.Your media contact: Ketterer Kunst Joseph-Wild-Str. 18 81829 München Michaela Derra M.A. Telefon: +49-(0)89-55244-152 Fax: +49-(0)89-55244-177 E-Mail: m.derra@kettererkunst.de Your contacts in the Rare Books Department:Ketterer Kunst GmbH Holstenwall 5 20355 Hamburg Christoph Calaminus Telefon: +49-(0)40-374961-11, Fax:-66 E-Mail: c.calaminus@kettererkunst.de

You can edit or delete your press release Auction Rare Books, Manuscripts, Autographs, Decorative Prints in Germany - Pocahontas and the Chiefs here