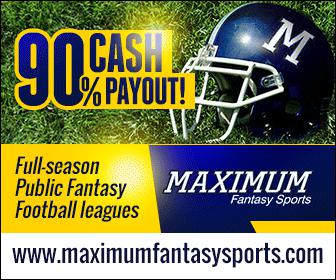 This event is actually the true draft results from the Maximum Fantasy Sports 2016 Fantasy Football company draft. The “mock” portion of this event was the guys talking about each other’s draft picks. This event took place over the course of a half day, a half barrel and a half of a 10ft sub but these guys do not take the event half-heartedly.

Every year, MFS holds their own internal draft which consists of ownership, support staff and writers and they all know the NFL inside and out so their results can be used as a guide for your fantasy football draft, especially if you are playing in one of their open fantasy football public leagues.

Always know your league’s scoring system when drafting! The draft results will vary from league to league depending on how scoring is weighted. This league uses 1 point per reception so keep that in mind when looking at the results. The remaining scoring is standard, though it is executed on a decimal basis. Using whole numbers, it equates to 1pt passing for every 25 yards, 1pt for every 10 yards of rushing and receiving. 4pts for a passing TD and 6pts for a rushing/receiving TD. Defenses score a bit more as points are assessed for yards and points given up as well as standard points for sacks and turnovers.

Mocking: there were no real surprises in the first round. Most of the round was spent complaining about Ron getting the top spot again this year and people taking more than 30 seconds for a first round pick, though Keller took a hippo-sized bite out of his sub right when it was his pick and needed to chew through it to prevent choking.

Mocking: There was no surprise in the room when Branko stated that he was going to grab his Muscle Hampster. Everyone seemed relieved when he didn’t do it in public viewing. Lots of discussion on each side on whether or not Le’Veon was picked too high. Ultimately, it was agreed upon that he would have missed at least 3 games during the season to injury anyway. One person quipped that the guy running behind Dez Bryant would have a better year thanks to Dak Prescott’s overthrows.

Mocking: three Packers being taken in round 3 caused Ron to pound his chest and recite a long list of Packers-dominated stats over the beloved Chicago Bears of most of this group. Well deservedly, he was showered with beer and told to leave the room since he gets the last pick in the next round. It was also speculated that outside of a Notre Dame draft, Golden Tate would still be on the board to be drafted.

Mocking: Payback is Hell and Sonny put Ron there by taking his beloved Aaron Rodgers right in front of him. He seemed to rattle Ron as everyone agreed that he reached for Matt Jones. The general thought was that Rob got the first steal by landing Demaryius Thomas as late as he did, with the caveat that the Broncos’ QB has to be Trevor Siemian and not the Butt Fumbler.

Mocking: loads of arguments ensued on whether any of these players were worthy of this round or were one-year wonders or over their injuries, outside of Russell Wilson. Many thought that Matt had the best pick with Floyd if Carson Palmer can stay upright for another season, which many doubt.

Mocking: Everyone rode Jake for taking Murray and started a pool on which week he would be demoted to second string. Bobby E didn’t escape though as many thought that Rawls would not be listed as the top RB on Seattle at any point during the regular season. While Sterling Shepard is talented, no way should he be taken this higher either.

Mocking: Branko went to the well again and came up dry when he asked if anyone has Snead his Willie before taking the WR. Ron admitted that he grabbed Williams far too early but primarily did it to get under Rob’s skin and made plans to bombard him with trade offers if he wants a Bell-Williams handcuff.

Mocking: The back-to-back Patriots got the most noise as everyone wondered if Keller’s beer was spiked for picking Lewis so high and explained the PUP does not mean that he bought a new dog. Mike insists that they will eat their words and he will stash him on the IR until the 7th game and rub it in afterwards. Bobby E did get props with his Brady pick since he probably would have been a 4th rounder without the suspension and there are plenty of other QBs to plug in during the first 4 games of the season. Also, no one knew why Adam thought that the Brees target combination would be Coby Fleener and why it would be in round 8.

Mocking: Ouch. Matt flattened Jake by asking him where his head was for picking a TE before handcuffing Coleman to Freeman, especially when Coleman may end up as the RB1. Not a soul had Ertz on the radar until double digit rounds. Mike was too amused by the show that he didn’t even make a statement on adding Blount to hold the RB position until he gets benched when Lewis is healthy.

Mocking: The focus was on Sonny for reaching for DeVante Parker last round and then Treadwell this round. While they have talent, no one else was ready to grab them yet….and no one definitely wanted a defense this high. While the defense in this league scores pretty well, there are too many good players on the board to grab a defense so early.

Mocking: Everyone was shocked at a 5-RB run to close out the round. It was noted that Frank Gore is similar to many of these picks and he went in the 7th round. The consensus was that Bill may have landed a steal if Abdullah can consistently run the ball and get some catches away from Riddick. Rob did ride Keller pretty hard by stealing White in front of him though Keller wouldn’t take the bait even though there was a strong feeling that Keller would have taken White this round to complete his trio of Patriots’ RBs.

Mocking: It was agreed that Ron had the steal of the draft in getting Smith at the end of the 12th round. A joke was made about Ron taking Colin Kaepernick next so he could get double points on connections. Of course, no one thought Kaepernick was anointed as the starter in San Fran but they decided to salute him nonetheless in a manner befitting him; everyone with one finger only – Kaepernick is not well-liked around MFS.

Mocking: The Kaepernick discussion and the accelerated beverage intake rate helped fuel this round as the loudest yet. Roars of approval for Diggs, Gordon and Eifert as great picks as well as Washington, who many expect to be the RB1 with Murray taking a backseat in Oakland.

Mocking: More attention was being paid to how bad the Chicago Bears are looking versus Kansas City than the draft itself as it has primarily gone into autopilot with defenses and, in the next round, kickers being the majority of the picks expected. Wright and Smith are looked upon favorably though are coming off big injuries.

Mocking: Bobby E ended the last round with a round of applause after getting chastised for grabbing a kicker in the 12th round, even if it was Goskowski. With the Seattle backfield a large unknown this year, Michael could finally live up to his billing. Following that, there was a lot of beer-fueled chest-thumping about how good their own teams are and how bad every other team in the league is. Of course, the trash-talking is one of the best components of a Live Draft. Let’s hope you has as much fun in your fantasy football drafts as the guys at Maximum Fantasy Sports do.

11-05-2020 | IT, New Media & Software
iComplai UG (haftungsbeschränkt)
Dr. Ron Wacker joins iComplai Advisory Board
iComplai, a Munich based regtech start-up for product safety, has just announced that Dr Ron Wacker has joined the team as advisor. Dr. Ron Wacker brings more than 12 years of experience in the area of food safety, with global leadership roles in worldwide testing companies like SGS and TÜV SÜD as well as manufacturers like Danone. Currently he is the director of Food and Feed Laboratories in South-West Europe at
06-08-2017 | Leisure, Entertainment, Miscel …
Music Promotion Club
Ron Bell’s New Sensation “Too Many People” Setting Flame
If you are a music enthusiast, you must be searching for some new music that can energize your inclination. However, you should tune in to new artist Ron Bell in soundcloud. His track “Too Many People" has assembled great number of remarks, plays and likes. Ron Bell anticipates that his music will get great acknowledgment before the worldwide audiences. "Too Many People" comes under storytelling music. As indicated by the
03-01-2013 | Arts & Culture
PrimaDonna Productions, Inc.
Keeping Ron "Forever Young"
"Uncle Ronny is a living legend of Texas music," says artrepreneur Nikki Young of her uncle, Ron Young. "And we want him to stay that way - a *living* legend - for as long as possible." In that spirit, nearly 300 of Ron Young's family, friends, and fans packed Sam's Burger Joint on Sunday, February 17 for "Forever Young," an all-day benefit for the singer/songwriter, who was diagnosed with an
06-25-2012 | Arts & Culture
Ron Young
New Music by Ron Young Is On The "Radar"
WHO: Ron Young WHAT: "Under the Texas Radar": CD Release Party WHEN: Sunday, July 8, 2012 6:00pm-9:00pm WHERE: Olmos Bharmacy 3902 McCullough Ave. San Antonio, TX 78212 Ron Young, a fixture in the Texas and Nashville music scenes, is bringing his music home to celebrate the release of his new CD. Young and his band, Young & Restless, will celebrate the debut of "Under the Texas Radar" with a special performance at Olmos Bharmacy on Sunday, July 8. The album
12-01-2010 | Politics, Law & Society
Ron Bell, Attorney
Ron Bell, Attorney Supports ʻCircle of Redʼ Fundraiser in Albuquerque
Ron Bell, a prominent Albuquerque Personal Injury attorney recently attended the “Circle of Red” event in Albuquerque. This event was held at the home of local business woman Gertrude Zachary known as ʻThe Castleʼ because of itʼs unusual architecture, and was attended by several hundred people who are interested in promoting research into womenʼs heart disease. This was an educational and well as fundraising event. Ron was particularly interested in
05-21-2008 | Associations & Organizations
Karr Associates, Inc
Speaker Ron Karr earns coveted Certified Speaking Professional (CSP) designation
Ron Karr, CSP Designated Certified Speaking Professional Ron Karr, sales, negotiation, & customer service expert and author, has earned the Certified Speaking Professional (CSP) designation. Established in 1980, the CSP is the speaking profession’s international measure of speaking experience and excellence. Fewer than 10 percent of the International Federation for Professional Speakers hold this professional designation. The CSP designation is conferred by the National Speakers Association (NSA) and the International
Comments about openPR
Your portal is fast, simple, and easy to use. Others may have more functions but they also demand more editing time, you have to preformat the text in order to achieve a good result etc. I think openPR is really fantastic!
Andreas Knepper, wallmedien AG