How will Brexit Impact American Economy? 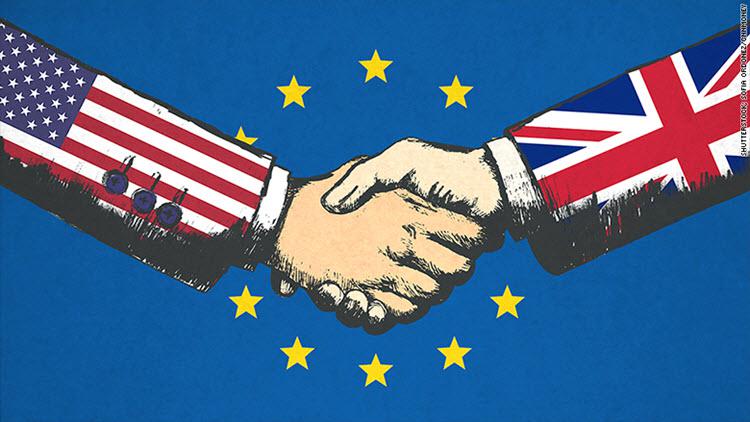 Impact of Brexit on USA

The United Kingdom's surprise decision to leave the European Union (known as Brexit) has led to uncertainty and confusion in international financial and manufacturing sectors. How can American companies take advantage of new trade opportunities arising from Brexit while protecting their interests from potential economic downsides?What's at Stake for American Economy Now That the UK Will be Leaving the European Union? Let's take a look at the impacts that Brexit will have on trade with various American industries.Changes in Interest Rates and Currency Exchange Rates In the short term, FUD (fear, uncertainty, and doubt) has taken hold, driving down the British Pound – which has, in turn, driven up the value of the US Dollar.FUD makes American exports more expensive on world markets, so manufacturers who sell to overseas markets will have to adjust their currency exchange rate forecasts accordingly. Those American manufacturers dependent on British products will see a gain thanks to the lower Pound exchange rate.What about Interest Rates in the Short Term? Thanks to Brexit, it's unlikely that American manufacturing companies will be facing an interest rate rise this fall. Janet Yellen, Chair of the US Federal Reserve, appears to have reversed earlier plans to raise US interest rates, due to the uncertain economy in Europe and predictions for a mild recession in Great Britain brought about by Brexit.Will the US Experience a Slowdown or Mild-Recession as a Result of Brexit? The preliminary employment numbers from June 2016 had economists concerned about an economic downturn in the US during the second half of 2016. However, news broke on Friday, August 5 that the US economy added 255,000 jobs during July, and earlier jobs figures were revised upwards, which has dispelled earlier concerns about an economic contraction. With US unemployment steady at 4.9%, we are very close to the figure – 4.6% unemployment – that many economists consider being the 'full employment' number.If these strong employment numbers continue into the fall, it's likely that the Fed will consider raising interest rates as we go into 2017.Meanwhile, in Great Britain, the Bank of England is Fighting Off an Economic Slowdown Canadian Mark Carney, who serves as Janet Yellen's colleague as the Governor of the Bank of England, has been forced to address dismal leading economic indicators, such as the UK Markit Purchasing Managers' Index (PMI) which dropped significantly in July. Economists are now predicting a mild recession in the UK in the second half of 2016.On Thursday, August 4, Carney announced the Bank of England's strategy to avoid a downturn. The Bank is cutting UK interest rates to 0.25% to stimulate demand; this will be accompanied by some 'quantitative easing' which will push more currency into the banking system. Worrisome for Carney are the UK's public debt position (among the highest of industrialized countries) and their large, ongoing trade deficit ($191 billion USD in 2014).Manufacturing companies that trade extensively with the UK will want to evaluate these changes and adjust their forecasts accordingly.How Much Weight Does British Trade Have on the American Economy and Vice Versa? If you are concerned about a British recession and how it might affect your manufacturing operations, it's helpful to consider the relative size of our two economies.The USA is Great Britain's largest trading partner — in 2014, the UK traded $51 billion dollars of goods and services with the USA. But the inverse is not true: Great Britain is not even among the top five US trading partners (Canada at $241 billion, Mexico at $194 billion, China at $134 billion, Japan at $67.5 billion, and Germany at $61.6B billion).MIT publishes an excellent visualization tool that allows you to explore the bilateral trade between the UK and the USA.Read more... https://formaspace.com/articles/technology-innovations/will-brexit-impact-american-economy/?utm_source=openpr&utm_medium=content&utm_campaign=article-080816Formaspace advances the spirit of discovery and creation through the design and manufacture of custom business furniture. Our furniture marries form to function with flexible solutions for clients in the laboratory, industrial, and office environments.design.consultant@formaspace.com 800.251.1505 1100 E. Howard Lane, Suite 400 Austin, TX 78753

You can edit or delete your press release How will Brexit Impact American Economy? here