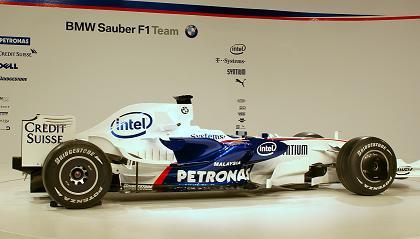 The BMW Welt in Munich was the Place to see the new BMW Sauber F1.08 / Foto: Mandoga Media

The BMW Sauber F1 Team took delivery of the fastest car in the BMW range at BMW Welt in Munich. The team was presented with the BMW Sauber F1.08 against the futuristic backdrop of the brand’s new vehicle delivery centre. The presentation, which took place before an audience of several hundred media representatives from around the world, included a spectacular cameo from Nick Heidfeld. As the longest-serving F1 driver in the BMW ranks, the German took the new car for a spin inside the vast building. The serious testing and roll-out will begin this week at the Circuit Ricardo Tormo in Valencia, Spain. The BMW Sauber F1.08 is eye-catching with its imposing front wing and extremely slim rear, and boasts a wealth of innovative technology. The team will take on the challenge with the same race drivers as in 2007: Germany’s Nick Heidfeld and his Polish team-mate Robert Kubica will be at the wheel of the BMW Sauber F1.08 for the 18 grands prix which make up the 2008 FIA Formula One World Championship. The name for the test driver has not been published yet. For Technical Director Willy Rampf the philosophy behind the race car for the 2008 season boils down to what he calls “evolutionary new development”. In other words, last year’s car already provided the engineers with a sound basis for the BMW Sauber F1.08, and they did not have to spend time correcting faults.A particularly eye-catching feature of the F1.08 is the mighty front wing. Having said that, the car’s nose has actually slimmed down, in equal measure to the rear end. The narrower engine cover has been designed with all-new extra wing elements.After three rounds of Demonstration at BMW Welt, Nick Heidfeld adds: "The F1.08 is the most beautiful vehicle I have seen in my F1 career. It has a lot of interesting details. I’m really excited about getting inside it on Thursday in Valencia".Mandoga Media Evelyn Kilb Residence Beausjour 06240 Beausoleil France info@Mandoga.comMandoga Media is a german speaking Media Office, which provides Press Releases, Photographs and Broadcast Video Footage from Central Europe.

You can edit or delete your press release The new BMW Sauber F1.08 unveiled in Munich here

07-17-2018 | Advertising, Media Consulting, …
MarketResearchReports.biz
Connected Car M2M Connections and Service Market: Audi Connect, BMW, Gemalto, BM …
MarketResearchReports.Biz adds “Global Connected Car M2M Connections and Service Market Share, Size, Trends and Forecast Market Research Report” reports to its database. This report provides a strategic analysis of the Connected Car M2M Connections and Service market and the growth estimates for the forecasted period. The Connected Car M2M Connections and Service Market has been comprehensively detailed in the report with special focus on a range of key elements such as
04-10-2014 | Tourism, Cars, Traffic
BMW Motorradzubehör Hornig
BMW R1100R conversion by Hornig
In time for the start of the motorcycle season Motorcycle Accessory Hornig presents an unusual conversion: The Hornig Team wanted to create a cool Scrambler from a used R1100R. The intention was how you can manage this with reasonable money-and time effort. By bringing the second hand R1100R that cost 2.500,00 euros, almost to the basic state, they put the base for the conversion. For a first optical change,
07-06-2012 | Tourism, Cars, Traffic
BMW North Scottsdale
BMW Earns Another IIHS Top Safety Pick – The 2012 BMW 3 Series
Scottsdale, AZ July 3, 2012 - The 2012 BMW 3 Series has earned a “Top Safety Pick” ranking from the IIHS. The midsize BMW luxury sedan has earned the award thanks to improved roof strength and protection in the redesigned 4-door model. Vehicles that are designated as a “Top Safety Pick” must earn “good” rankings in all four categories of vehicle safety testing including frontal impact testing, side
07-22-2011 | IT, New Media & Software
gasq - Global Association for Software Quality
BMW supports Automotive Software Tester
With Dr. Marc Russ out of BMW’s quality management the Automotive Tester Board has a new, competent member. Dr. Russ will represent the OEMs view in the board and will help to develop the scheme with his expert knowledge. By that way the gasq Automotive Software Tester certification can further address the branch’s need and help to improve the quality of software testing in the field of automotive. Dr. Hendrik Dettmering, president
03-19-2008 | Business, Economy, Finances, B …
Hendrick BMW
Hendrick BMW Launches BMW Performance Parts Special
Hendrick BMW, one of the leading BMW dealers in Charlotte, NC, announces BMW Performance Parts Special program featuring attractive price on Carbon Fiber Air Intake ($800 plus tax) and Performance Exhaust System ($889 plus tax), with free installation. BMW performance parts enhance the acceleration, handling and braking performance of a BMW vehicle. Available in all BMW centers in the US, these components take the vehicle's capabilities to levels, that those familiar
01-28-2008 | Business, Economy, Finances, B …
Hendrick BMW
Hendrick BMW announces attractive deals on new BMW cars in stock
Hendrick BMW boasts of a wide and varied choice of new and pre-owned BMW cars such as the 3 Series, 5 Series, 6 Series, 7 Series, X3, X5, Z4, M5, M6 and Z4M. The dealership, with state-of-the-art facilities and highly committed workforce, offers the best service. The dealership extend its services in and around Matthews, Pineville, Belmont, Indian Trail, Harrisburg, Stanley, and Bessemer City, Hickory, Statesville, Salisbury, Gastonia, Rock Hill,
Comments about openPR
I can't but agree to the positive statements about your portal: easy to use, clear layout, very good search function, and quick editing!
Jens O'Brien, Borgmeier Media Communication