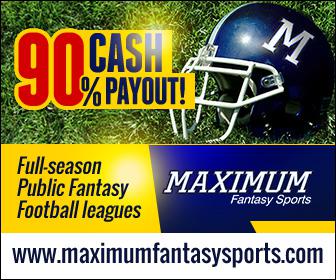 Maximum Fantasy Sports is breathing additional life into the fantasy football industry by providing unique games for their customers to play. In an industry dominated by DraftKings and FanDuel and their salary cap games, Maximum Fantasy Sports is separating itself by offering games utilizing an Online Draft and configuration options that no one site offers. "Fantasy Football has always been more enjoyable when a live draft is a part of team-building.", states Bill Parsons, President of Maximum Fantasy Sports.For those players interested in playing in public fantasy football leagues for fun or for a cash prize, MFS offers enough games that you will find yourself trying out a few different game types to spice up your NFL viewing. "Salary Cap games in fantasy football have been around for decades, but the majority of players enjoy the thrill of a Live Draft, which is not a part of a Salary Cap game. All of our games have a draft component to it for extra enjoyment and to help level the playing field. Drafting takes the fear of swimming with fantasy sharks out of the game.", explained Parsons.The fantasy football games offered at MFS are listed below and come in a variety of entry fees/payouts with drafts scheduled throughout July, August and September. Payout amounts differ with the entry fees but are always 90% of the total pot collected. Playoffs begin in week 14 and also feature a Toilet Bowl for all Head-to-Head leagues. You can find a full description of each public fantasy football league on the website for the following league types.o Traditional leagues – 10-team head-to-head league featuring the most widely-accepted positions and scoring system: 1 QB, 2 RBs, 3 WR, 1 TE, 1 D, 1 K.o Traditional Flex leagues – identical to the Traditional league except that flex positions are used; an extra starting position with a RB/WR Flex position and 3 WR/TE positions in place of the WR positions.o Traditional 2-Week leagues – this league is identical to the Traditional Flex Live Draft league except that 4 teams make the playoffs and each matchup runs for 2 weeks each with the highest combined points winning.o PPR leagues – this league resembles the Traditional Flex league but the scoring system awards a point per reception and rushing and receiving TDs drop to 4 points each with bonuses awarded (extra 1 or 2 points) for longer TDs.o TD Only leagues – this league is a big departure from Traditional fantasy leagues and harken back to the days of scoring on paper when the Commissioner made life easy on himself and only needed to score points for Touchdowns. TD points vary with the distant of the touchdown.o League Average leagues – this league resembles the Traditional Flex league but the twist in this league is that you will receive 2 Win/Loss decisions per week; one versus your H2H opponent and one versus the League Average (the average score of all starting lineups in the league for that week). This league type awards higher-scoring teams more than standard H2H.o Bye Week Rollover leagues – this league resembles the Traditional Flex Live Draft league but the twist in this league is that you will be able to choose players the week before they are on Bye and their game has started and determine if you want their points for that week to also carry-over to their Bye week, thus locking in two weeks (good or bad).o In-game change leagues - this league resembles the Traditional Flex league but the twist in this league is you will be able to change players at the quarter or half, depending on which league you join. This helps if you have a player that gets hurt or is underperforming in his game. Of course, each period is locked once we receive the first play in that period and you will only be able to replace open periods with another player's open periods.o Total Point leagues – this league resembles the Traditional Flex Live Draft league but the twist in this league is that the standings are based off of the total points accumulated over the course of the season by your starting lineup. This league truly awards the highest scoring team.If you prefer a Live Online Fantasy Football Draft, there are many Public leagues available to augment your own Private leagues and free Survivor, Confidence, Pick em and Squares Pools at Maximum Fantasy Sports along with a nice deposit bonus and high payout rate.Maximum Fantasy Sports hosts Public and Private fantasy football leagues and free office pools; Survivor Pools, Confidence Pools, Pick 'em Pools and Squares Pools. MFS leagues with cash payouts return 90% of the entry pool to the winners.3501 N. Southport Ave Chicago, IL 60657

02-12-2019 | Arts & Culture
Banasthali
Banasthali Celebrates Basant Panchami with Traditional Fervor
Basant Panchmi is celebrated on the fifth day (Panchami Tithi) of the bright fortnight (Shukla Paksha) of the Hindu month Magh. It is said that from this day the spring season (Vasant Ritu) begins and the day is dedicated to worship of Goddess Saraswati. The festival of Basant Panchami also known as Shri Panchami and Saraswati Panchami is a seasonal festival to welcome spring and is observed in many regions of
09-12-2017 | Tourism, Cars, Traffic
Creta Maris Beach Resort
Traditional Harvest in Creta Maris Beach Resort
On Friday September 8th, a “Traditional Harvest” day was held in Creta Maris Beach Resort. This year, the action was part of the events organized by the resort, in the context of its operation as a certified member of "We do local" and its participation in the project “TUI Care Foundation, FUTOURIS Project: Crete, First steps towards a sustainable food destination 2017-2019”. The ritual began by collecting the grapes from the
09-11-2017 | Health & Medicine
MarketResearchReports.biz
Traditional Wound Management Market | MarketResearchReports.biz
Latest industry research report on: Traditional Wound Management Market : Industry Size, Share, Research, Reviews, Analysis, Strategies, Demand, Growth, Segmentation, Parameters, Forecasts The global traditional wound management market is expected to reach a market value of US$ 5,746.0 Mn by the end of 2026, expanding at a CAGR of 3.1% during the forecast period (2016-2026). The market is segmented by product type into Bandages, Gauzes, Gauze Sponges, and Sponges. Out of
11-18-2016 | Industry, Real Estate & Constr …
Centennial Business Suites
Centennial Redefines Traditional Office Spaces in Singapore
November 18th 2016, Singapore – The Centennial Business Suites offers workspace rental solutions that according to them are the only solutions that you will ever need! Their rise to the heights of popularity might indicate that their claim is an accurate one too. One of the many reasons behind their success would undoubtedly be the large variety of offices that they can offer to their clients for renting. In addition
04-11-2012 | IT, New Media & Software
celum
celumsummit – traditional conference dedicated to learn.save.time.money
This year the traditional and renowned celum SUMMIT takes place in Vienna, Schoenbrunn Palace. In this beautiful surrounding the international conference will be completely dedicated to learn.save.time.money. Learn how to save money. Save time and learn how to make more money. Time is money; learn how to save more of it. The celum SUMMIT starts with the pre-event in the evening of 23rd April 2012, followed by the conference on the
03-21-2012 | Arts & Culture
John C. Campbell Folkschool
Traditional Music Instruction at Historic Folk School
Musicians from novices to experts have the opportunity to enjoy instruction in Banjo, Mandolin, Fiddle, Folk Harp, Guitar, Dulcimer, Dobro, Ukulele, Autoharp, Musical Saw, Native American Flute and more. The setting is the 300-acre historic campus of John C. Campbell Folk School in picturesque Western North Carolina. The school is the largest program of its type in the country. A music class is scheduled at the Folk School just about
Comments about openPR
Your portal is fast, simple, and easy to use. Others may have more functions but they also demand more editing time, you have to preformat the text in order to achieve a good result etc. I think openPR is really fantastic!
Andreas Knepper, wallmedien AG