Debut exhibition for Battle of the Somme digger


Press release from: Journal of Organics 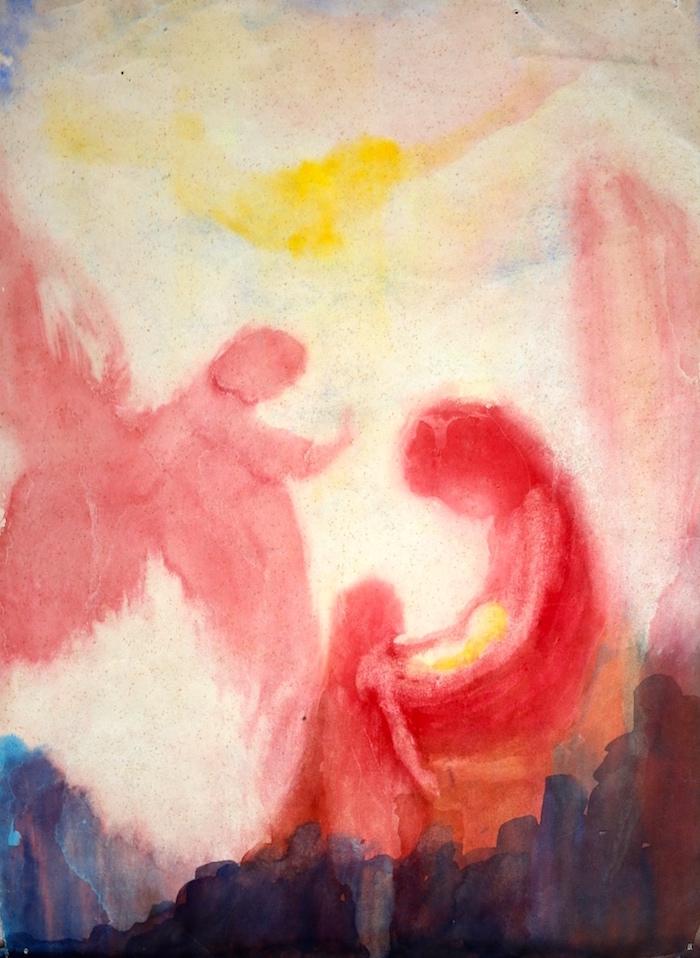 Angels of the cradle

Hobart, July 5. 2016. A newly discovered portfolio of artworks by the Australian/Italian artist Ernesto Genoni launches today. Before WWI, Ernesto trained at the Brera Academy of Fine Art in Milan. He arrived in Australia just a few months before the outbreak of the war.In a surprise move - he was a pacifist and he was Italian - Ernesto enlisted in the Australian Imperial Force (AIF) in 1916. He was shipped to France and deployed in the 16th Battalion into the Battle of the Somme. It was the most lethal battle of World War One - there were a million casualties in the Battle of the Somme. There was no more dangerous place in the world to set foot.Ernesto volunteered as a stretcher bearer. The work for a stretcher bearer was seemingly unending - except that, in their sorties into No-Man's-Land, many of Australia's stretcher bearers died along with their injured cargo, cut down by bullets, shells or shrapnel.For Ernesto, in the midst of this hell, came the unexpected. He was conscripted off the battlefield of the Somme - out of the AIF and into the Italian Army. It quite likely saved his life. Transferred to Italy, Ernesto promptly refused to take the Italian oath of allegiance - he was a pacifist. He was court martialled in Verona, Italy. Somehow he escaped death and the firing squad. The colonel said to him 'You must have a very good saint in paradise looking after you? to which Ernesto responded 'Yes sir?.Ernesto spent time in Italian military prisons and served time as a medical orderly at the Military Hospital of Verona. He was not repatriated back to Australia.The works in this exhibition are understood to be the works Ernesto painted during a stint studying with Rudolf Steiner at the Goetheanum at Dornach, Switzerland in 1924. It was the final year of Steiner's active career, the year he founded biodynamic agriculture, and the year of his spiritual science course, the First Class, in which Ernesto was enrolled. Ernesto finally returned to Australia in 1926. He had plans for an exhibition of his artwork but that never did happen. In Australia he was championing the ideas of Rudolf Steiner. He was the pioneer of biodynamic farming and organic agriculture in Australia. Joining in 1928, Ernesto was the first Australian in Steiner's Experimental Circle of Anthroposophic Farmers and Gardeners. Ernesto practiced biodynamic agriculture in Victoria and Western Australia from the 1920s through to the 1950s - he was a man ahead of his time. The works in this debut exhibition of Ernesto Genoni present his take on painting 'in the anthroposophic style'. The works feature spiritual themes, angels and stylised landscapes. After nearly a century these works are still bright, fresh and etheric.Ernesto's exhibition 'Angels of the First Class: The Anthroposophic Art of Ernesto Genoni' is presented at the Vital Years Conference 2016 - Cradle of a Healthy Life 2016 (July 5 - July 9) at the Tarremah Steiner School, Huntingfield, Hobart, Tasmania. After Hobart, the exhibition will travel to other venues.Angels of the First Class: The Anthroposophic Art of Ernesto Genoni Vital Years Conference 2016 - Cradle of a Healthy Life 2016 (July 5 - July 9) Tarremah Steiner School, Huntingfield, Hobart.Contact: Journal of Organics email: editor@jorganics.org www.jorganics.org

More Releases from Journal of Organics

02-27-2017 | Energy & Environment
Journal of Organics
61% of French households buy organic food
A new paper published by the Journal of Organics reports that 61% of French households buy organic food in their shopping basket. Researchers from INRA (Institut National de la Recherché Agronomique) note a distinctive feature of the organic market is its strong growth rate. In their study of 22,359 French households, INRA researchers found that the average food-budget share for organic products was 3.61% (for all households) and 5.96% (for
02-27-2017 | Arts & Culture
Journal of Organics
Australia’s first woman organic farmer
A new paper published in the Journal of Organics reveals the story of Australia’s first woman organic farmer. Ileen Macpherson (1898-1984) was a co-founder of Australia’s original Demeter Farm (c.1934-1954) along with her partner Ernesto Genoni (1885-1974). Ileen was a member of Rudolf Steiner’s Experimental Circle of Anthroposophic Farmers and Gardeners (from 1936). Ernesto was the first Australian member (from 1928). At their Demeter Farm in Dandenong, Victoria, they practiced biodynamic