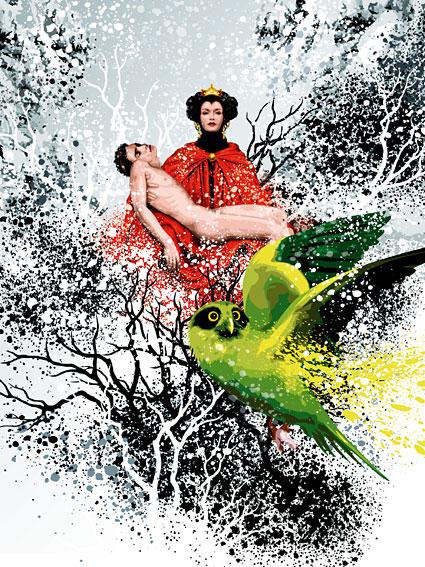 Strychnin Gallery proudly presents: The Snow King. A solo show featuring Chris von Steiner. Opening February 15th, 7 p.m., at Strychnin Gallery London.There's a door, somewhere. A door that opens on a white and silent world, where every secret is kept frozen under snow and ice. There's a kingdom, somewhere. A kingdom wherein there lives a sad little boy, waiting for some brave stranger to deliver him from his icy castle. There's a king, somewhere. A lonely little king willing to offer you his crown, who is not exactly who you might think he is. There's a door, somewhere. A magical door you'd better leave shut if you're not prepared to meet the child you forget you were.Welcome to the world of French visual artist Chris von Steiner. Using his fantasies, dreams and desires, Chris creates digital fairytales out of the stories he grew up with, stories that have since turned into eerie tales of passion, fear, loneliness, pride, innocence and hope. Combining the pop icons of his youth with bold colors, elements from movies, music, books, and television, Chris von Steiner’s digital paintings have a haunting familiarity right upon first sight. Like a pop song touching your heart and sticking in your mind, von Steiner’s works invade your memory and stir up tales you can get lost in. He has exhibited all over Europe and the USA.Von Steiner’s new series of work titled “The Snow King” takes you to an icy kingdom that visions of childhood dreams and nightmares, brotherhood, family ties, loyalty and betrayal abound in. The story told in these images is hard to make out – which of the characters is to be trusted? Who is good and who is evil? Set in a cold winter wonderland, the Queen is holding her dead son, two brothers are close but one is silenced, a stag is prancing through the snow… let your fancies take you to this enchanted kingdom and lose yourself in your own imagination.Strychnin Gallery is proud to present French artist Chris von Steiner with his first solo show in London.Chris von Steiner: The Snow King Opening: Feb. 15th, 7 pm Show runs until: March 30th, 2008 @ Strychnin Gallery London 65 Hanbury Street London E1 5JP +44 207 247 5666 Contact: Iris Bitter// Public Relations Mail: production@strychnin.com Web: www.strychnin.com Open: Fri - Sun 12-6With galleries in three bustling hotspots – New York City, Berlin, and London – Strychnin Gallery is a playground for artists from all around the globe. It is a place where collaboration is encouraged, new projects are constantly developed and creativity is the one and only thing that truly counts. Owned by charismatic curator Yasha Young, Strychnin is dedicated to presenting emerging American artists to the European art world and vice versa. It features a variety of artists with particular individual styles rather than artists belonging to a collective “hip” movement. If you insist on putting a label on them, try lowbrow turned highbrow, pop surrealism or fantastic realism among others. Founded in Brooklyn in 1998, the gallery opened a European showroom in Berlin in 2002. The US gallery has since moved to a location in Manhattan’s Chelsea district, opening with a group show featuring over 70 artists in October of 2006. Strychnin opened a third location in East London’s vibrant art scene right off of Brick Lane in October 2007.

You can edit or delete your press release The Snow King. Chris von Steiner at Strychnin Gallery London here

08-31-2021 | Industry, Real Estate & Constr …
Research Foretell
Telescope Market Growth and Forecast To 2027 Covid-19 Analysis | Nikon, Steiner
The report covers the present scenario and the growth prospects of the global Telescope Market for year 2020 to 2027. This report also shows the most important factors that can lead to the acceleration and deterioration of market growth. As a result, this report will be endowing with all the required information on the up-to-date developments & trends and emphasize on markets & materials, capacities & technologies, and on the
10-04-2018 | Business, Economy, Finances, B …
WISE GUY RESEARCH CONSULTANTS PVT LTD
Binoculars Global Market 2018: Key Players – Bushnell, Nikon, Tasco, Pulsar, S …
Binoculars Industry Description Wiseguyreports.Com Adds “Binoculars -Market Demand, Growth, Opportunities and Analysis Of Top Key Player Forecast To 2023” To Its Research Database This report focuses on the global Binoculars status, future forecast, growth opportunity, key market and key players. The study objectives are to present the Binoculars development in United States, Europe and China. Binoculars are a pair of identical or mirror-symmetrical telescopes mounted side-by-side and aligned to point accurately in the same
03-01-2018 | Business, Economy, Finances, B …
business news
Global Binoculars market 2018 - Steiner, Zeiss, Olympus, Simmons, Leica, Canon, …
Apex Market Reports, recently published a detailed market research study focused on the "Binoculars Market" across the global, regional and country level. The report provides 360° analysis of "Binoculars Market" from view of manufacturers, regions, product types and end industries. The research report analyses and provides the historical data along with current performance of the global Binoculars industry, and estimates the future trend of Binoculars market on the basis of
07-17-2017 | Advertising, Media Consulting, …
GlobeMetrix
Global Binocular Market 2017: Global Binocular Market 2017: Pulsar, Lunt Enginee …
Global Binocular research report provides the complete and precise view of the market during the forecast period from 2017-2022. The Binocular market Report enlists the different factors which can help the readers in transforming their knowledge into vital business decisions. To start with the Binocular report analyses the market development based on market gains, extensive product applications, dominant market regions and the companies within these regions. At an initial stage, the
05-17-2017 | Advertising, Media Consulting, …
market research 2017
Global Binoculars Market 2017 - Pulsar, Steiner, Zeiss, Olympus, Simmons, Leica, …
Binoculars Market 2017 Industry research report provides important information to identify and analyze the market need, market size and competition. This market research report used in maintaining competitiveness over competitors. Scope of the Report: This report focuses on the Binoculars in Global market, especially in North America, Europe and Asia-Pacific, South America, Middle East and Africa. This report categorizes the market based on manufacturers, regions, type and application. Request For Sample Report @
05-13-2011 | Sports
Steiner Sports
Knicks All-Star Amar’e Stoudemire And Steiner Sports Collectibles Announce Par …
New York Knicks All-Star Amar’e Stoudemire and Steiner Sports (steinersports.com), the leader in sports collectibles, today announced a partnership to produce a product line of authentic, hand-signed collectibles. Part of the proceeds will benefit the Amar’e Stoudemire Foundation and its programs in New York and abroad. “I chose to partner with Steiner Sports because they are the best in the business,” said Stoudemire. “I am looking forward to working with
Comments about openPR
9 o'clock: discuss press release with client, 10 o'clock: submit release to openPR, within the briefest possible time release is published and displayed in a prominent place on openPR.de. I am thrilled!
Zehra Spindler, Calypso Now! - Communication Agency