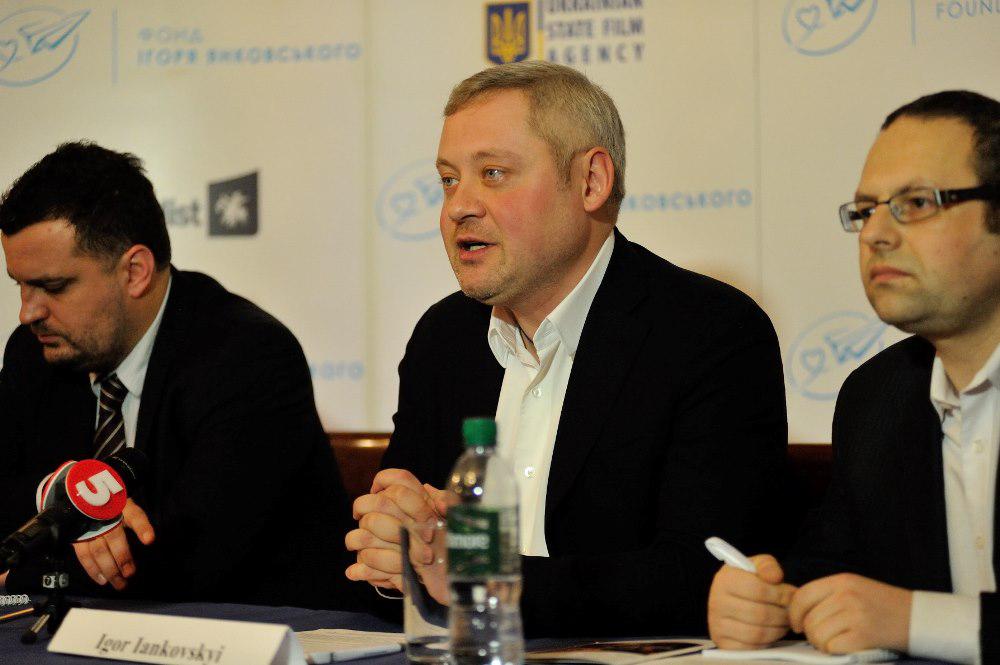 Igor Iankovskyi Charity Foundation “Initiative for the Future” along with “Molodist” Kyiv International Film Festival, with the support of Ministry of Foreign Affairs of Ukraine has organized and successfully conducted the Days of Ukrainian Cinema in the capital of the Great Britain.During the Days of Ukrainian Cinema in London, British viewers could see the collection of the best contemporary Ukrainian fiction, documentary and short-length movies, as well as classic film pieces. Ukrainian Film Festival, funded by Igor Iankovskyi Charity Foundation “Initiative for the Future”, took place in multicultural center RichMix in London’s arts district Shoreditch with assistance of the British agency Dash Arts.On the 10th of December the Embassy of Ukraine in London hosted a press-conference dedicated to this spectacular event, with the speeches delivered by the founder of “Initiative for the Future” Fund, Igor Iankovskyi, and the head of the Ukrainian State Film Agency, Philip Illienko. During press conference, the representatives of British and Ukrainian press were introduced to Ukrainian directors and actors, whose films have been brought to London.“The year 2015 began for us with the week of Ukrainian Cinema in Paris and it is symbolic that it ends with the Days of Ukrainian Cinema in London. Our country is undergoing through dramatic events. However, what we would like to show to London today, to the whole world – tomorrow, is not the image given by the news reports, but completely different, culturally rich, diverse, interesting and even mysterious Ukraine. That’s why we founded the Days of Ukrainian Cinema, which we are continuously conducting in the big European cities. The cinema, especially its young representatives, is able to carry the innermost, the most important. We would like to introduce the uncompromising, inspirational and surprising Ukrainian cinema to the whole world, the cinema, that fascinates the viewers of prestigious film festivals”, - said Igor Iankovskyi, the founder of “Initiative for the Future” Fund.He outlined that his Foundation is extending its program of fellowships for the talented youth, who would like to continue their studies abroad. Currently, the negotiations are being held with the representatives of several European countries on this issue.Igor Kyzym, the interim Chargé d’Affaires of Ukraine, has read the message of the State Secretary for Culture, Media and Sport, a big friend of Ukraine, John Whittingdale. “The presentation of the new cinematographic talents along with the recognized classics from Ukraine will only enhance our cultural and educational relations. Thus, the creative diversity overcomes the adversities, for what I would like to express my gratitude to Ukrainian State Film Agency, Embassy of Ukraine in Great Britain, Igor Iankovskyi Foundation and world-famous “Molodist” Film Festival”, - the message has stressed.The same evening, the Days of Ukrainian Cinema have been opened in the multicultural center RichMix with the best documentary film of recent years: “The Living Fire”, which shows the dramatic story of Ukrainian shepherds, who are struggling to preserve the ancient traditions. The audience watched the movie with its breath held and in the end – rewarded its authors with applause.The evening ended with the reception for 100 persons honoring Ukrainian cineastes, where British journalists, critics and viewers could communicate with the films’ authors in the relaxed atmosphere. The Iankovskyi Foundation organized the journey for ten Ukrainian cineastes, who presented their recent creations.Among them – “The Sighted” (2014), telling the story of American boy and blind kobzar, who have been brought together by Fate in dramatic years of 1930s. The movie generated so much excitement, that the theater was overcrowded. After the show, the viewers did not let go for a long time the director Oleg Sanin.A lot of interest has generated the historical drama “TheOneWhoPassedThroughFire” (2011) about the Ukrainian aviator, who had been taken captive by the Nazis during the World War II, then became the GULAG’s prisoner and then – the chieftain of an Indian tribe in Canada.For the family view, the musical film “The Trumpet” (2014) has been presented by the author of scenario, Anastasiya Mateshko. The compilation of the best short films of the 45th “Molodist” Kyiv International Film Festival (2015) has been presented by its winner Kateryna Hornostai, the director of “Aloof”. Alongside with another director, Vovka Solovey, they answered the viewers’ numerous questions about the situation in contemporary Ukraine.In the course of the event, British viewers could also see the picture by Yuriy Illienko “The white bird with a black mark” (1971), a brilliant masterpiece of Ukrainian poetic cinema, presented by actor and director Mykhailo Illienko and Philip Illienko, the Head of Ukrainian State Film Agency. Furthermore, a new movie project based on poetry of Taras Shevchenko, creations of Ivan Mykolaichuk and Yuriy Illienko - “Toloka” (“Joint/Communal Work”) has been presented in the Headquarters of the Association of Ukrainians in Great Britain.At the last year the Igor Iankovskyi Charitable Fund “Initiative for the future” had conducted the Days of Ukrainian Cinema in Munich and Paris. Starting from the year 2013, the Fund is fully financing the National Short Film Contest under the “Molodist” Kyiv Film Festival and provides the winner with opportunity to take part in the biggest cinematographic events – the Cannes and Berlin Film Festivals."Initiative for the Future" – is Ukrainian Charitable Foundation, founded by Igor Iankovskyi - a successful Ukrainian businessman, financier and philanthropist.Charities unite like-minded people in a common goal - to develop and implement educational and cultural programs in Ukraine. Activities of the organization based on voluntary initiatives.Igor Iankovskyi Foundation "Initiative for the Future" was founded June 5, 2012, and since its foundation supports talented young people from all over Ukraine, contributing to a highly cultured society in the future. Projects that have already been implemented charitable foundation, got success not only in Ukraine, but also in some European countries - Belgium, France, Germany and Poland and North America (USA).12, Amosova Street, build. 1, 5th floor, “Horizont Park” Business Center, Kiev, 03680, Ukraine

01-31-2019 | Industry, Real Estate & Constr …
Kharkiv Bearing Plant HARP
Ukrainian bearing plant discovers Turkish market
In 2018, Kharkov Bearing Plant (HARP) share export was 64 %. This year the company is going to increase this index up to 70 %. HARP is going to begin 2019 with the entering the Turkish market. The first steps for this will be a debut participation of HARP in the international agricultural exhibition AGROEXPO, which will take place in Izmir on February 7-10. “Turkey is a prospective market for
08-22-2018 | Industry, Real Estate & Constr …
HARP
Ukrainian HARP enters Canadian market
Within demonstration tour Discover HARP, Kharkov Bearing Plant (HARP) starts to move further to the Canadian market. On September 11-13, the leading domestic producer of bearing products will take part in the largest agricultural exhibition of the North American continent – Canada's Outdoor Farm Show. HARP will become the only Ukrainian producer, which will present the bearings for agricultural sector at this event. “70-years production experience allows us to satisfy the
04-11-2018 | Industry, Real Estate & Constr …
LOZOVA MACHINERY
LOZOVA MACHINERY JOINED THE UKRAINIAN AGRIBUSINESS CLUB
LOZOVA MACHINERY joined the Ukrainian Agribusiness Club (UCAB) and became the only domestic producer of the agricultural implements among the association members. “To be the first and the best is that LOZOVA MACHINERY is seeking to and what unites our company and UCAB”, – Roman Girshfeld, Vice President Sales and Marketing, points out. The own unique developments and patented solutions, implemented in LOZOVA MACHINERY tools, allowed the company to be the first,
08-05-2011 | IT, New Media & Software
PMR Ltd
Ukrainian IT market worth €1bn
Ukrainian IT market increased by approx. 30% last year. In Euro terms its value crossed €1bn, which is comparable with the level recorded in 2005 and it represents a half of the value from 2007. In 2010 IT products and services sales bounced back. Ukraine got some economic recovery after the financial crisis and political stability after the presidential and local elections. According to the latest report by the research
01-26-2010 | Energy & Environment
ZORG UKRAINE Ltd.
Ukrainian biofuel industry receives tax benefits
By the 18-th of January 2010 the Ministry of Industrial Policy of Ukraine received 7 requests to proceed with a concessionary import of equipment, used within the industry of renewable fuels. Following information has been provided by the press-service of consulting company FuelAlternative. On January 1, 2010 Ukrainian government validated a law “On making changes and additions to the tax policy of Ukraine in order to facilitate production and
06-06-2007 | IT, New Media & Software
Hi-Tech Initiative
New member of Ukrainian Hi-Tech Initiative
21 May 2007, Kiev. Ukrainian Hi-Tech Initiative membership increased with a new company – “Krendls” (Dnepropetrovsk). “Krendls” is the European software development company located in Ukraine with the representative office in Germany. The company started its operation in 2006. Now it is a dynamically growing company providing fast and highly-functional solutions for B2B and B2C segments. Main development interests of “Krendls” are closer partnership with European companies as well as
Comments about openPR
We publish our press releases on openPR.de because we like people who are "open" - just like us.
Frank Obels, CEO, INCONET - Informationssysteme, Communication und Netzwerkberatung GmbH