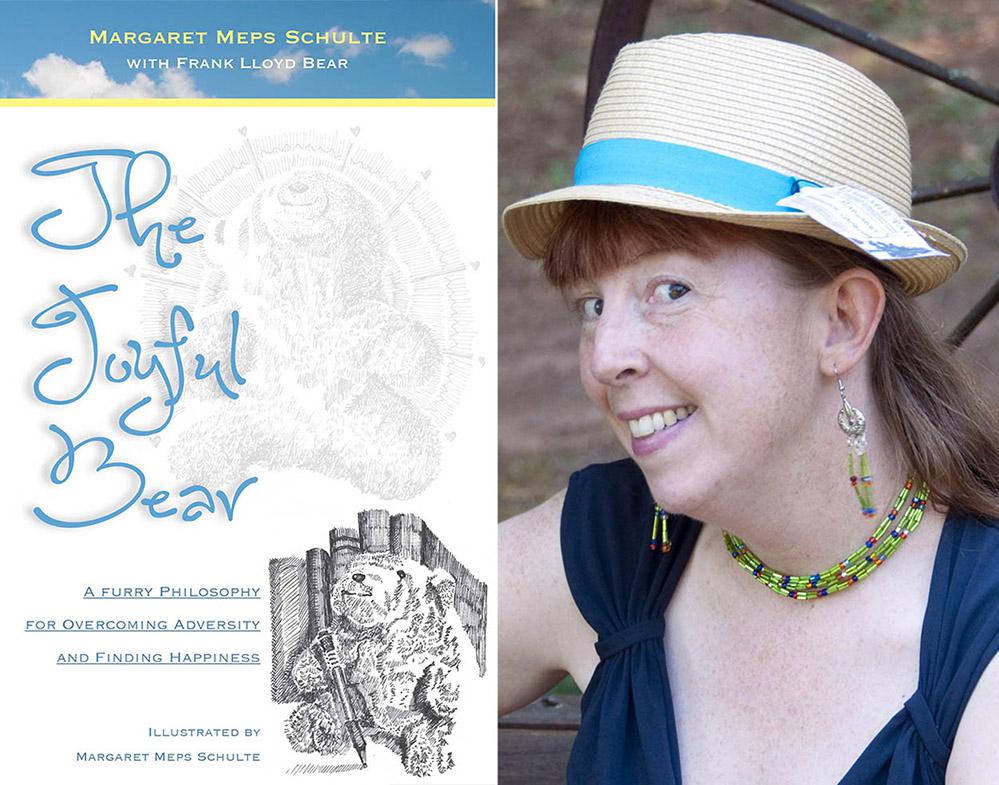 VERO BEACH, FLORIDA. The author of 2014's "oddest title in the world" has teamed up with an unusual co-author, a stuffed polar bear named Frank Lloyd Bear. Margaret Meps Schulte, who won the Bookseller Diagram Prize for Strangers Have the Best Candy, is launching The Joyful Bear: A Furry Philosophy for Overcoming Adversity and Finding Happiness on Kickstarter this week. The book is intended as a concise nightstand resource, with suggestions for everything from overcoming insomnia and anxiety disorder to becoming a better listener. The story is told in a series of conversations that explain Frankie's "teddy bear philosophy," bringing his humorous perspective to topics like mindfulness, unconditional love, and fear. Schulte attributes the success of her first book to the bear. "Frankie is a genius; he helped me break through writer's block and depression," she said. "Everybody needs to meet this quirky Buddha-bear." The Joyful Bear, which is illustrated by Schulte, incorporates wisdom from such diverse sources as the Dalai Lama, Marshall Rosenberg, and Pollyanna. The authors hope their human-bear collaboration will take its place beside The Taoh of Pooh and The Little Prince as a valuable guide to personal growth and happiness.About the authors: Margaret Meps Schulte is the U.S. expert on how to talk to strangers and make the most from chance encounters. A former business analyst, she left the Seattle corporate world in 2003 and has been nomadic ever since. At ten inches tall, Frank Lloyd Bear is small for a philosopher, but large by teddy bear standards. He has traveled the back roads of the U.S. and Canada and has sailed thousands of miles aboard sailboats. The Joyful Bear is his first book. For more information, call Margaret Meps Schulte at (772) 360-4568 or visit the book web page: 1meps.com/bear. The Kickstarter campaign can be found at http://www.kickstarter.com/projects/1meps/the-joyful-bear-the-worlds-newest-happiness-expert.Margaret Meps Schulte is the author of The Joyful Bear and Strangers Have the Best Candy.538 6th Street Vero Beach FL 32962