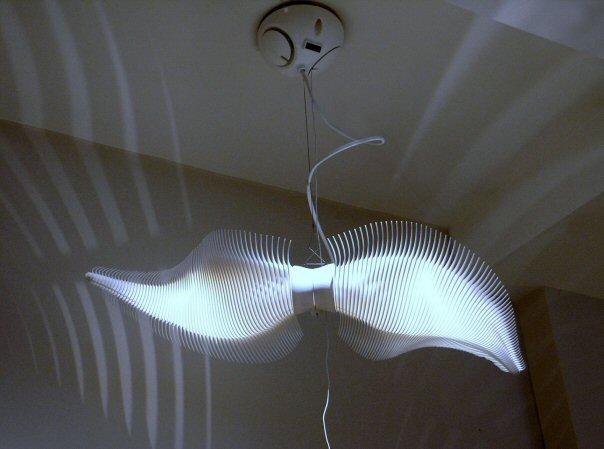 The new AI light was created by international designer,

Additive layer manufacturing technology using a machine built by EOS is helping internationally acclaimed designer, Assa Ashuach, to produce interior furnishings that could not be made any other way. Laser-sintering of plastic powder in successive horizontal slices taken through a 3D CAD model, a technique normally used in engineering to produce prototypes and products quickly. A good example is Ashuach’s AI light. Endowed with artificial intelligence, the light incorporates five digital sensors that cause it to move and morph its structure in response to changes in the space that it is illuminating. The owner is able to interact with it using movement, sound and other lights. Over time it develops new behavioural patterns and a unique character, becoming so familiar with its surroundings that it can behave unpredictably if moved elsewhere. “Layer manufacturing from my 3D software allows me to create seemingly impossible designs,” said Ashuach. “I use the EOS laser-sintering process because of the natural look, versatility and production qualities of the polyamide nylon. It enables the production of pieces that are aesthetically uncompromising and robust enough to be used functionally for their intended applications.” Ashuach’s love of making things stems from his childhood on a kibbutz in Israel. After studying industrial design at the Betzalel Academy in Jerusalem, he enrolled at the Royal College of Art in London where he experimented with digital modelling and rapid prototyping before becoming a designer.EOS GmbH Electro Optical Systems Martina Methner Robert-Stirling-Ring 1 D-82152 Krailling Tel: +49 89 893 36-134 Fax: +49 89 893 36-288 Email: martina.methner@eos.info Homepage: www.eos.infoEOS was founded in 1989 and is today the world leading manufacturer of laser-sintering systems. Laser-sintering is the key technology for e-Manufacturing, the fast, flexible and cost-effective production of products, patterns or tools. The technology manufactures parts for every phase of the product life cycle, directly from electronic data. Laser-sintering accelerates product development and optimizes production processes. EOS completed its business year 2006 with revenues of 52.3 million Euro and thus continues its ongoing growth.