The 96th Tour de France will start from Monaco 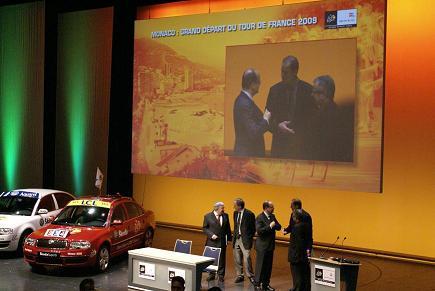 The Presentation of the 2009 Tour de France in the Grimaldi Forum, Photo: Mandoga Media

The announcement is scarcely official, but already a particular aura of enchantment surrounds the start of the 2009 Tour. “We know that the Tour de France Start from Monaco will be a landmark event”, says Christian Prudhomme, Chef of the Tour de France. “The prestige of the Principality together with its location and geography confirm this”, he continues.After the official presentation of the riders, the magnificent setting of the Rock will be the side of the opening test.The launch of the 2009 Tour from Monaco will be especially appreciated as starts from the south are rare. Indeed, the competition has only set off 4 times from the south in 30 years and only once from the south-east.Prince Albert II said during the presentation: “I am delighted to announce that the 2009 Tour de France will start from Monaco. The Principality had the pleasure, a very long time ago, of seeing the Tour de France pass through the town, in 1964 for the last time. There are still several months to go before this event takes place, but the announcement has already roused the enthusiasm of the entire Monegasque population. I am convinced that the 2009 Tour de France will reinforce the already close link between Monaco and France.” The official ceremony to mark the start of the 96th Tour de France will take place on the Monaco Grand Prix circuit. The riders will then proceed along a large portion of the circuit and its legendary sites in order to take the Eastern exit out of the Principality at the Saint-Roman interchange.Mandoga Media Alexander Sandvoss Residence Beausjour 06240 Beausoleil France info@Mandoga.comMandoga Media is a german speaking Journalist Office, which provides Press Releases, Photographs and Broadcast Video Footage from Central Europe.