Auctions in June: Modern and Contemporary Fine Art - Select Quality at its best 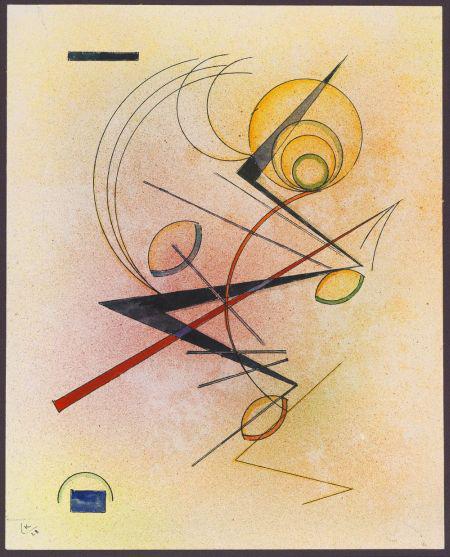 Munich, 31 March 2016, (kk) – Kandinsky, Pechstein, and Piene are true masters of their trades. The three of them, as well as many other acclaimed artist colleagues are represented with choice masterpieces in the auctions at Ketterer Kunst in Munich from 9 to 11 June. 1) Modern Art 2) Post War 3) Contemporary Art1) Modern Art This section is led by Wassily Kandinsky's strictly geometric composition “Kleines Warm“ from 1928, one of his works on paper from the 1920s, which are particularly sought-after on the international auction market. The watercolor with India ink is especially captivating for its defined color fields and its orderly chaos, a characteristic feature that also impacted decorative commercial art in the 1920s. The estimate for the small-size work is at EUR 400,000-600,000.Alexej von Jawlensky's splendid “Sonnenuntergang“ was also made in 1928. The artist was taken with the light's unusual abundance of colors at sunset, accordingly, he adds an almost magical atmosphere to this landscape with his expressive brush stroke and the choice of strong colors. The 32,4 x 42,5 cm ( 12.2 x 16.7 in) large oil painting on paper will enter the race with an estimate of EUR 300,000-400,000. With Otto Mueller's tempera and mixed media work “Zwei Mädchen auf der Waldwiese“ the range of offerings includes an idyllic scene of highest quality. The work in landscape format was made around 1910 and will be offered with an estimate price of EUR 200,000-300,000.Max Pechstein's watercolor “Abschied am Abend“, made in reminiscence of a journey to the South Seas in 1950, could perhaps be obtained for EUR 120,000-150,000. Under the impression of inner and outer devastation as a consequence of World War II, the artist created a very special document of his quest for the heart of human connection in pristine nature; rendering a dream of what has irrecoverably been lost.Apart from a range of works by Emil Nolde, led by two watercolors of sunflowers (estimates: EUR 80,000-120,000 each), Karl Hofer is also represented with around half a dozen works. His “Mann (Jüngling) mit Hund“ from 1918 delivers remarkable proof of the artist's maturity which he had predominantly attained in the field of portray. The oil painting has been estimated at EUR 120,000-140,000.Alongside several works by Gabriele Münter, among them the oil painting “Rapallo (Hütte in Bergen)“ from 1905/1906 (estimate: EUR 50,000-70,000), more formidable works of Modern Art from amongst others Walter Leistikov, Edvard Munch, Pablo Picasso, Oskar Schlemmer and Karl Schmidt-Rottluff will be called up.2) Post War ArtAfter top hammer prices were realized last December, the appetite for ZERO art is still big. Accordingly, numerous works from the movement around the triad Gerhard Uecker, Heinz Mack and Otto Piene will be offered this spring. The latter had already achieved a new world record in the last auction at Ketterer Kunst with a result of EUR 825,000*** and also occupies second place in the world auction result ranking. In this respect the estimate of EUR 150,000-200,000 for the oil, fire and soot painting “Luther Rose“ from 1962, the best days of ZERO, is almost moderate, especially as it is a very powerful and striking work by the great master.Next to a small 50 x 60 cm (19.6 x 23.6 in) untitled fire picture by Piene from the same year (estimate: EUR 80,000-120,000), Heinz Mack is represented with the object “Lichtrelief“, made in 1968, which carries an estimate price of EUR 70,000-90,000. His work “Pyramide im Licht (Chromatische Konstellation)“ could perhaps change hands for EUR 35,000-45,000. The work is characterized by an immaterial color conception as part of an image space filled by an intense light and pure colors. Tony Cragg is the leading figure in the sculpture section and one of the most important representatives of “New British Sculpture“. His work “Outlook“ from 2008 is kept in his characteristic and unmistakable abstract-organic structure and is estimated with a price of EUR 70,000-90,000. Apart from the work “Study for Homage to the Square: Framed Sky 'C'“ by Josef Albers (estimate: EUR 120.000-150.000) from 1970, other masterpieces come from acclaimed artists such as Christo, Rainer Fetting, Adolf Richard Fleischmann, Günther Fruhtrunk, Rupprecht Geiger, Ernst Wilhelm Nay and, of course, Günther Uecker.3) Contemporary ArtThe department of Contemporary Art took part in the fall auction 2013 with its own catalog for the first time. As it has been subject to an ever increasing interest, it has become firmly established in the range of auctions at Ketterer Kunst. Next to Nicola de Maria, whose large-size oil painting “Dipinti che avvolgono l'universo“ (estimate: EUR 50,000-70,000) which is guaranteed to make for excitement in the salesroom, the Dresden artist Eberhard Havekost will also enthuse his fans. His oil painting “Gras” from 2002 enters the race with an estimate of EUR 30,000-50,000.More top lots in this section come from, among others, Tony Oursler (“Blue Transmission“), Markus Schinwald (“Untitled (Legs #33)“) and Aris Kalaizis (“Der Tag der großen Hoffnung“).*** hammer plus feesPreviews 09/10 May - Ketterer Kunst, Holstenwall 5, 20355 Hamburg* 12-14 May - Galerie Schwind, Fahrgasse 8, 60311 Frankfurt* 18/19 May - Galerie elten & elten, Wilfriedstr. 19, 8032 Zurich (Switzerland)* 23/24 May - Ketterer Kunst, Malkastenstr. 11, 40211 Dusseldorf* 27 May-03 June - Ketterer Kunst, Fasanenstr. 70, 10719 Berlin* 05-10 June - Ketterer Kunst, Joseph-Wild-Str. 18, 81829 Munich** * select works ** all worksAuctions in Munich 09-11 June - Modern Art/ Post War /Contemporary ArtSince it was founded in 1954, Ketterer Kunst has been on the forefront of auction houses dealing in Fine Art and Rare Books, with its headquarters in Munich, and a branch in Hamburg. Representatives' offices in Berlin, Heidelberg, Dusseldorf, Italy and the US have contributed substantially to the company's success. In addition, exhibitions, special thematic and charity auctions as well as monthly online auctions at www.ketterer-internet-auction.com are regular events at Ketterer Kunst. Robert Ketterer is owner and CEO of Ketterer Kunst.Press inquiries: Ketterer Kunst Joseph-Wild-Str. 18 81829 Munich Germany Michaela Derra M.A. Telefon: +49-(0)89-55244-152 Fax: +49-(0)89-55244-177 E-Mail: m.derra@kettererkunst.de Client inquiries:Ketterer Kunst Joseph-Wild-Str. 18 81829 Munich Germany Tel. +49-(0)55244-444 Fax.: +49-(0)55244-177 E-mail: infomuenchen@kettererkunst.de

You can edit or delete your press release Auctions in June: Modern and Contemporary Fine Art - Select Quality at its best here

02-05-2019 | IT, New Media & Software
Archiware GmbH
Archiware delivers professional Archive and Backup for 1,000 EUR
Archiware GmbH, manufacturer of the media-focussed data management software suite Archiware P5, now offers the new, affordable P5 Desktop Edition. The new license bundle caters to small teams and single users willing to professionally archive their media. Director and DOP Anton Nelson showcases what the P5 Desktop Edition can do in a beautiful testimonial. Munich, February 4th, 2019 - Keeping media safe is crucial in media production – be it raw
10-30-2013 | IT, New Media & Software
Onlineprinters GmbH
onlineprinters.com invests more than EUR three million in production
New 8-colour offset printing press expands online print shop's capacity Neustadt an der Aisch, Germany – By investing more than EUR three million, Onlineprinters, the internationally operating online print shop, has expanded the production facilities at its German site. Extra offset printing capacity was added in September with the purchase of a new state-of-the-art 8-colour printing press, the Heidelberger Speedmaster XL 106-8P, including a new CTP system for digital printing plate
07-17-2012 | Health & Medicine
Otto Bock HealthCare GmbH
EUR 155,000 for Safe Zones Project
Eichsfeld Festival Attracts 25,000 Music Fans to Downtown Duderstadt "Tonight is going to rock!" It was with these words that initiators Professor Hans Georg Näder and Peter Maffay opened the 2012 Eichsfeld Festival this past Saturday. Around 25,000 music fans followed the invitation to experience top-class live performances in the Marktstraße of Duderstadt that day. Peter Maffay, Ich + Ich and four regional special guests did more than just wow the
01-18-2012 | Business, Economy, Finances, B …
Clariant International Ltd
Clariant successfully issues EUR 500 million Eurobond
Muttenz, January 17, 2012 – Today, Clariant successfully priced an Eurobond transaction of EUR 500 million with a tenor of 5 years, issued by Clariant Finance (Luxembourg) S.A. and guaranteed by Clariant Ltd. The fixed rate notes with a minimum denomination of EUR 100,000 and a final coupon of 5 ⅝ % p.a. are maturing on January 24, 2017. The orderbook was significantly oversubscribed on the back of strong investor demand.
12-10-2011 | IT, New Media & Software
VSHosting
VSCloud – cloud services from 0.78 EUR per day
On 15th of August, at a press conference, the unique cloud project named VSCloud was presented which provides cloud services of IaaS (Infrastructure as a Service) type. After three months, VSCloud can boast with hundreds of active users mainly from the Czech Republic and Slovakia. The leadership of VSCloud foresees that the number of first thousand active users will be surpassed by the end of this year. What are the advantages
02-08-2008 | Energy & Environment
Continuing Education Center der TU Wien
“Die Presse” Scholarship in the amount of EUR 15000
MSc Program Environmental Technology and International Affairs The shortage of environmental resources and the dealing with pollution are challenges which the international society of the 21st century has to face. Climate change, water shortage and air pollution are only some of the problems which have to be solved. The purpose of a sustainable development can be reached only if decision makers dispose of a comprehensive education. The cooperation between the Vienna University
Comments about openPR
I can't but agree to the positive statements about your portal: easy to use, clear layout, very good search function, and quick editing!
Jens O'Brien, Borgmeier Media Communication