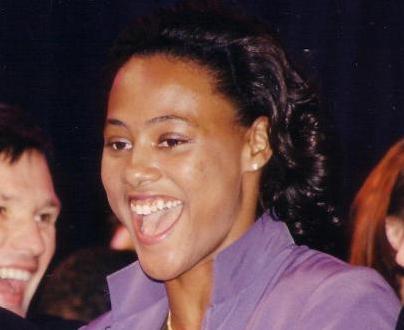 Marion Jones during the IAAF Gala in Monaco 2001, Photo: KILB

At its meeting held in Monaco on 23 November 2007, the IAAF Council reviewed the case of Marion Jones in light of her admission that she was using the prohibited substance known as 'the clear' beginning on 1 September 2000 and confirmed the following consequences of her admission of doping and acceptance of sanction: 1. A 2-year period of ineligibility beginning on the date of her acceptance of sanction on 8 October 2007 i.e., until 7 October 2009 2. Disqualification of Marion Jones from all competitions on or subsequent to 1 September 2000 3. Annulment of all her individual competitive results on or subsequent to 1 September 2000 4. Annulment of the results of all relay teams in which she competed in IAAF competitions on or subsequent to 1 September 2000 5. Forfeiture and return of all awards and medals obtained in relation to the above competitions 6. Forfeiture and return of money awarded to her in relation to the above competitionsThe IAAF Council further recommends to the IOC Executive Board to disqualify Ms Jones and the USA women's 4x100m and 4x400m relay teams from the Sydney Olympic Games in 2000 and to insist on the return of all medals and diplomas.Mandoga Media Alexander Sandvoss Residence Beausjour 06240 Beausoleil France info@Mandoga.comMandoga Media is a german speaking Media Office, which provides Press Releases, Photographs and Broadcast Video Footage from Central Europe.

10-23-2020 | Associations & Organizations
Samantha Jones Hair Co
Samantha Jones Hair Co Announces Business Milestone
North Lakes, Queensland - October 22, 2020-Making clients feel like a million dollars is part of what has earned Samantha Jones Hair Co its exciting new title. Praised for being the top hairdresser in North Lakes, Samantha Jones Hair Co is devoted to exceeding client expectations for hair and beauty services. They provide creative, innovative, and modern hair services that align with clients' beauty goals. Samantha Jones Hair Co has made
07-15-2020 | Arts & Culture
Puhff Mask and Accessories
How Creative, Jaheyla Jones, Centers Community in Her Businesses
Jaheyla Jones is a creative, ambitious person, so when she was hit with the novel Coronavirus, her world was shifted. Before the pandemic hit she was working on films for her production company, blaqq, an up and coming creative firm. Her company was dedicated to pushing storytelling to new heights and creating space for new voices and narratives. Jones was in the middle of creating new films and
11-16-2018 | Advertising, Media Consulting, …
HTF Market Intelligence Consulting Pvt. Ltd.
Earring Market Is Booming Worldwide | Stauer, Ernest Jones, JamesViana
HTF MI recently introduced Global Earring Market study with in-depth overview, describing about the Product / Industry Scope and elaborates market outlook and status to 2023. The market Study is segmented by key regions which is accelerating the marketization. At present, the market is developing its presence and some of the key players from the complete study are TraxNYC, GLAMIRA, Bulgari, West & Co. Jewelers, TJC, Stauer, Ernest Jones, JamesViana,
02-13-2017 | Advertising, Media Consulting, …
Hancock Press
Howard Jones releases new book -Edafos Iron Will
FORT SMITH, Ark. – December 15, 2016 – – Edafos Iron Will. War has broken out between Deneaux and the now United Den, and it’s only a matter of time before the rest of Cardia is drawn into conflict, and with growing tension between nations, the Divines grom silent. In the South of Cardia, a new Queen rises to place her stake among the nations of Cardia, and old heroes are
03-18-2008 | Leisure, Entertainment, Miscel …
GEM Public Relations
Gary Sturgis to co star in Chicago Pulaski Jones
Los Angeles, CA, March 17, 2008 --At long last, fans of Hollywood\'s favorite bad guy, Gary Anthony Sturgis (\"Tyler Perry\'s Diary of a Mad Black Woman\", \"Tyler Perry\'s Daddy\'s Little Girls\", \"Pride\"), will get a chance to see him do something totally different--comedy. That’s right, Mr. Sturgis does have a funny bone and the golden voice can do more than frighten the good guy. Gary will be co-starring in the
08-13-2007 | Fashion, Lifestyle, Trends
FanSupervision
“Michael Jackson – Conspiracy” - VIP Chat with Aphrodite Jones
On August 8th the second chat with American author and journalist Aphrodite Jones took place in the chatroom of the Michael Jackson Social Network (www.mjsn.org). Aphrodite Jones is the author of several true crime books, some of them even were made into movies. The Academy Award winning movie “Boys don’t cry” is based on her novel “All she wanted”. In her latest book “Michael Jackson – Conspiracy” she not only
Comments about openPR
OpenPR ist the nicest and most clearly laid out PR platform I have seen to this day. The press releases are displayed very nicely and clearly and without any unnecessary frills. The updates are fast and the finished release looks appealing and is clearly legible. Even with 16 years of experience one discovers new things from time to time. Congratulations!
Gabriele Ketterl, Director Marketing & PR, Menads