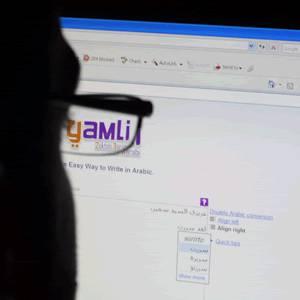 TOOL SEEKS TO EASE USE OF THE ARABIC LANGUAGE ONLINE

CAMBRIDGE, Mass. -- November 15th, 2007 -- Language Analytics LLC, an internet startup, unveiled Yamli.com, a web-based tool that empowers users to easily use and access the Arabic web. The Arab world has one of the highest internet usage growth rates. Yet, access to and development of Arabic content has been difficult, mainly because of the complexity of typing Arabic. Although Arabic keyboards are available, the vast majority of Arabic-speaking Internet users are accustomed to an English keyboard. Users often resort to spelling Arabic words out phonetically using English characters, a process known as transliteration. Yamli allows users to convert these English characters into Arabic words. Co-founder Habib Haddad explains: “I would often experience frustration trying to find Arabic news on the web. Like millions of users, I could easily express my Arabic words using English letters, but I had difficulty typing them in Arabic. The need for a technology that efficiently converted those phonetic spellings into meaningful Arabic words seemed natural to me. It would have to be so seamless that users would be able to write Arabic text and forget they were using English characters. This is how Yamli was born.” Yamli’s patent-pending solution converts the user’s input into Arabic as he or she types. To maximize usability, Yamli accepts a variety of phonetic spellings and generates a list of suggested matches. Over time, Yamli will recognize popular patterns of spelling and word selection, increasing its accuracy. Co-founder Imad Jureidini says: “The Arabic web will truly take off when people can do two things easily: find and write Arabic content. While there are many applications for our technology, we sought to address these two fundamental needs immediately.” Yamli’s initial release encompasses two tools: Yamli Search and Yamli Editor. Yamli Search allows users to search the web using Arabic keywords with Google. Users can search for general web content, videos, news, images and blogs. Yamli Editor allows users to write Arabic text that can then be copied into any electronic medium. Yamli can be found at http://www.yamli.com. Habib Haddad Language Analytics LLC press@yamli.com 617-395-8513 About Language Analytics LLC Language Analytics LLC, an internet startup based in Cambridge, MA, specializes in smart transliteration technologies for Arabic and other languages. For more information, visit our website, at http://www.yamli.com/about/.

05-16-2017 | Leisure, Entertainment, Miscel …
LastThink
United Arab Emirates Radio Live - Stream Player
Gambian Live Radio is compatible with iPhone, iPad and iPod touch and is very easy to use. This online application is free of charge and provides you with the exclusive opportunity to listen to Radio containing newsworthy programs, breaking news, as well as state-of-the-art music from any country you want, due to its highly qualified internet broadcasting. The quality of the app is always processed by the sophisticated individuals, who
09-07-2016 | Arts & Culture
gisela graf communications
Architectural Guide United Arab Emirates
Architecture and the United Arab Emirates: these keywords almost automatically provoke thoughts of the headline-grabbing and record-breaking architecture in Abu Dhabi and Dubai. A closer inspection, however, reveals neo-traditional edifices in Sharjah or ambitious structures and trendsetting projects in the smaller emirates. Furthermore, there are numerous examples of a new generation of Emirati architecture, whose focus lies on sustainability and the preservation of diverse building traditions. The architecture in the
09-18-2012 | Energy & Environment
TiSUN GmbH
Tyrolean sun for Arab markets
In order to serve the markets in the Middle East, the Austrian solar thermal manufacturer TiSUN founded the subsidiary TiSUN GCC FZC in Dubai at the beginning of December 2011. The first projects in the MENA-region have been successfully implemented. A major project in Abu Dhabi is equipped with solar systems “made in Austria”. "The countries on the Arabian Gulf are among the sunniest regions in the world. With nine hours
02-08-2012 | Health & Medicine
Medicopex
Successful Participation at Arab Health 2012
At the annual Arab Health Exhibition in Dubai, UAE, in January Medicopex GmbH displayed their Products and Services at an enlarged booth at the Za'abeel Hall. This show for medical equipment today is one of the most important events like the Medica in Germany and the Fime in the USA and has visitors from the Arab region, as well as from the Indian subcontinent and Eastern African countries. The Medicopex
01-18-2011 | Leisure, Entertainment, Miscel …
Lovehabibi
LoveHabibi Launches Worldwide Arab & Muslim Personals Service
18 Jan 2011 - Barcelona, Spain - LoveHabibi launched officially today its worldwide personals service for Arabs and Muslims. The website caters for Arabs, Muslims and Arab Christians worldwide, with a focus on European and North American expatriate communities. "After a solid beta period, we're now excited to have enough members and functionality to roll out the site officially", said media specialist Karim Higgins. "Stay tuned to LoveHabibi for many more
07-07-2009 | IT, New Media & Software
White Mountain Technologies
Beirut Arab University Signs with UniversiTools
Beirut Arab University (BAU) in Lebanon has selected UniversiTools software to manage its full scheduling needs across university campuses in Lebanon and Egypt. Established in the Tarik El-Jadidah district of Beirut in 1960, Beirut Arab University offers over 300 programs to 15,000 students per year. The university’s aggressive strategy will see campus expansion in Tripoli, Debbieh, and the Bekaa Valley, Lebanon, as well as Alexandria, Egypt. BAU is
Comments about openPR
OpenPR ist the nicest and most clearly laid out PR platform I have seen to this day. The press releases are displayed very nicely and clearly and without any unnecessary frills. The updates are fast and the finished release looks appealing and is clearly legible. Even with 16 years of experience one discovers new things from time to time. Congratulations!
Gabriele Ketterl, Director Marketing & PR, Menads