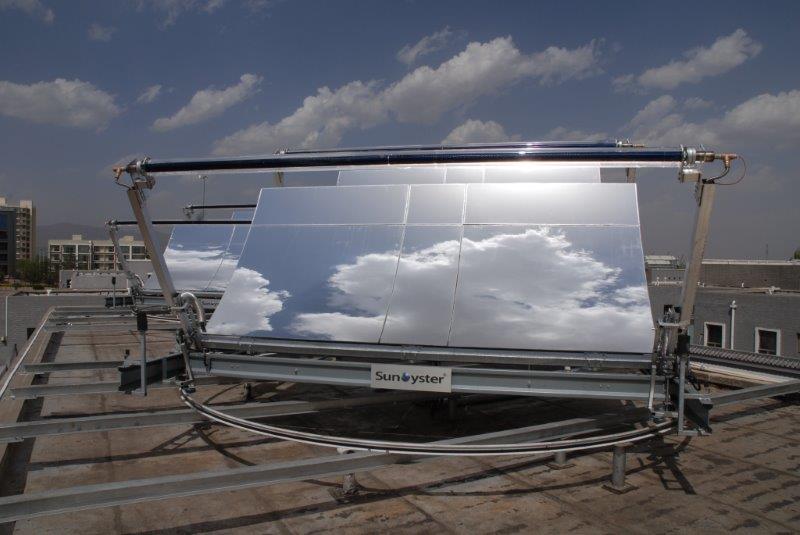 The Concentrating Solar System for Combined Heat and Power Inks Sales Contracts for Pre-Series Installations in Chile, Egypt and India

14 December 2015. SunOyster Systems GmbH (SOS), the Hamburg-based manufacturer of the CPVT system SunOyster, bags several contracts to install the innovative machines in different parts of the sun belt of the world. In the various locations and climates and under diverse grid conditions of the projects, SOS wants to demonstrate the maturity of the solar co-generation system for serial production.

The SunOyster reaches a total energy efficiency of up to 75%, i.e. 30% of the direct radiation is converted into electricity and 45% into heat. The SunOyster shall be the most competitive form of solar energy where besides electricity also heat and/or cold are needed. The SunOyster wants to play an important role in filling the Framework Convention on Climate Change – which was adopted yesterday in Paris – with life.

Starting in the West, the international utility ENGIE (formerly GdF Suez), through its Chilean subsidiary Laborelec Chile SpA, wants to install two machines in Chile and one in Belgium. Northern Chile has with 3,000 kWh per year and square meter the best direct normal irradiation (DNI) in the world. That corresponds to the energy content of 300 liters or two barrels of oil per m² and year. It is no wonder that many enterprises in Chile, for example mining companies, have discovered photovoltaic energy (PV) and also concentrating solar thermal power plants (CSP) as their cheapest form of power supply. The SunOyster will concentrate the Chilean sunshine more than 1,000 times in order to generate each up to 15,000 kWh of electricity and 22,500 kWh of heat. ENGIE wants to compare the yield in Northern Chile and in Santiago de Chile with a site in Belgium in order to assess the future use of the SunOyster especially in contracting models. ENGIE is expert operator in the three businesses of electricity (largest IPP of the world), natural gas and energy services. Sebastian Falkenberg, general manager of Laborelec Chile, is still selecting different possible platforms for an installation in second quarter of 2016.
“This project offers three advantages: We can prove our SunOyster in the hardest solar radiation of the world. ENGIE is a leading global energy player and of course a very potent customer. And finally the booming Chilean solar market can become interesting for us” says SunOyster Systems’ general manager Carsten Corino.

The Egyptian government is planning to reduce the present subsidies for fossil-generated electricity and to increase the share of renewable energies in the generation. DNI is frequently as high as 2,500 kWh – roughly three times the value of Hamburg. This is in particular the case for the off-grid area in which Egyptian entrepreneur Hassan Abdel Salam and his company Smart Power Solutions want to install three SunOysters in connection with an Eco Lodge. While the electricity shall replace most of the fuel used by the noisy diesel generator, the heat shall be used for thermal water desalination in order to “green the desert”. He is planning to develop the regional distribution of SunOysters.
Hassan Abdel Salam: “The African continent is facing a high increase in energy demand – in Egypt 8 % every year – and therefore a serious energy gap. Solar energy has become a very attractive option. The reason we chose the SunOyster is basically for its high efficiency of up to 75% which leads to low cost of energy. We believe we have the right product for the African market.”

In sunny India, the national government under Prime Minister Narendra Modi announced a very ambitious target of 100,000 MW solar power capacity before the end of 2022. SOS will realize several installations with renowned companies which are interested to become a future large scale customer or perhaps even a local manufacturer of the SunOyster. Tata Power, belonging to the legendary Tata group, is the largest private utility in India. Tata wants to install the SunOyster on an office building in order to heat process water for the kitchen. Solar cooking and dish washing is popular in the large Indian canteens. Another paying customer is Swelect (formerly Numeric Power) from Chennai in Southern India. The mid-sized electronics manufacturer, PV installer and solar IPP wants to use the SunOyster heat in foundries belonging to the group. Altogether, SOS estimates the process heat demand of India in the SunOyster temperature range of up to 170°C to be around 140,000 MW today. For the SunOyster, this would correspond to an additional 93,000 MW of electricity generation. Or to altogether almost 20 million SunOysters of 16 m² mirror surface each.

Additional SunOyster supply contracts in these and more countries are under negotiation.

Copyright: SunOyster Systems GmbH
Reprint free of charge. Please send a copy. Do not hesitate to contact us should you have any questions.

SunOyster Systems is a Hamburg-based start-up company developing and manufacturing the SunOyster. The SunOyster is a technology for the co-generation of heat and power.