Mellow Boards brings the asphalt surf to the next level 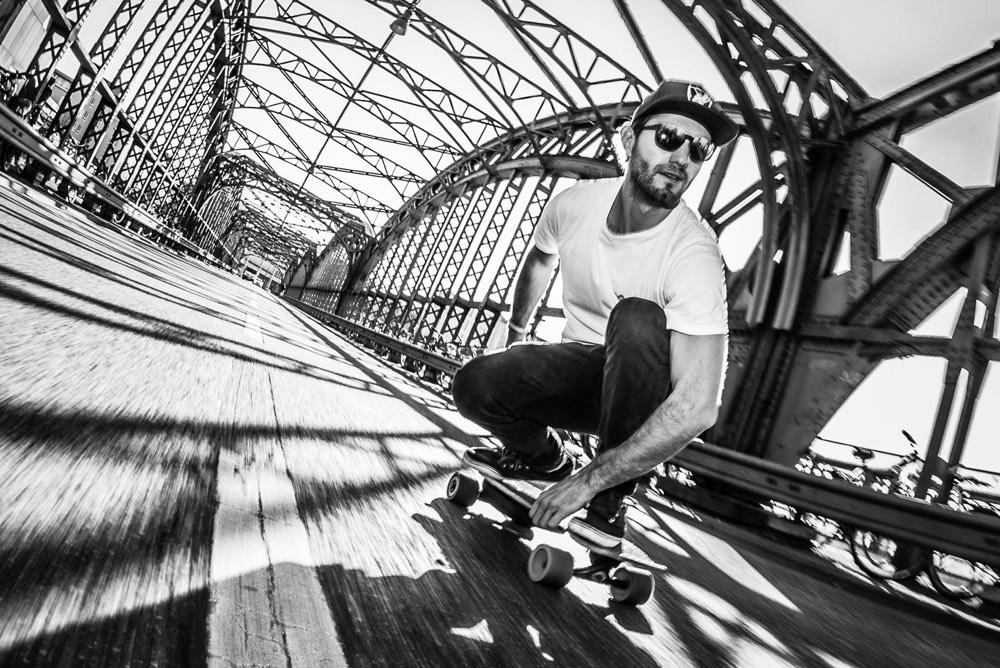 A startup of boardsports enthusiasts from Hamburg is about to bring the concept of electric driven skateboards to a whole new level. They developed the first mountable drive that turns any normal skateboard into an electric skateboard – in a blink of an eye. Half a year after their successful Kickstarter campaign they now release their next milestone on their way to serial production: the final design.In late spring 2015 the Hamburg based startup Mellow Boards introduced in their Kickstarter campaign the worlds first mountable electric drive that fits on any skateboard. Unlike all other e-boards, which are produced in Asia, the newcomers from Hamburg rely on quality „Made in Germany“. To great success: After one month they gathered supporters from over 28 countries and a funding sum of over 325.000 US Dollar. Enough starter cash to bring their dream of „the Endless Ride“ to the streets. Six months later the team now uncovers the final design of the Mellow Drive.Altogether the design of the drive, now all-black, looks more pure and grown up and aligns with the classical shape of a skateboard. But the new facelift also goes hand in hand with a lot of technical improvements. The surrounding frame made of magnesium offers maximum protection for the Mellow Drive and the swappable battery pack (10 mile range) against curbs and impacts of all kind.Also the swapping of the battery has become smarter. With its click-in mechanism less space is needed which is good news for those who are interested in the 4x4 setup. The new design allows you to mount the two drives even on shorter decks.The only button of the system is located on top of the battery. This is where you switch the Mellow Drive on and off. While riding you control the Mellow Drive with the custom made remote. It’s a one button device with a LED display and a slide control.The ribbed surface of the frame towards the truck is pretty striking. But this is actually not a design but a safety feature as Kilan Green (CTO at Mellow Boards) explains. The ribs are there to dissipate heat during braking. Unlike the competition Mellow has a dual braking system. The regenerative brake directs energy back into the battery with every braking maneuver. In case the battery is fully charged, Mellow has a built-in braking resistor that prevents the brake from switching off and dissipates the energy into heat via the ribs. Most of the other brakes out there simply switch off at that point. A real eyecatcher are the blue wheels with their yellow rims. They are the colourful cover for the in-wheel motors (25 mph top speed). To exchange them, all you need is a standard skateboard tool. If you like the looks you can even get the matching front truck in the Mellow pre-order shop (www.mellowboards.com)The new design isn’t the only big step towards serial production. At the turn of the year Mellow Boards will also start the second phase of their pre-order. So in case you couldn’t decide yet to order your Mellow Drive you shouldn’t wait too long. From January 1st prices will go up – around 200 US Dollar per drive. The principle behind that is simple, the sooner you order, the better the offer.// MORE ABOUT MELLOW BOARDS //Mellow Boards was founded by Johannes Schewe and Kilian Green in January 2015 to provide the best electric skateboard drive in the world. With their mountable electric drive „made in Germany“ they have become pioneers in the market. The startup gathered more than 300.000 Euros with their crowd funding campaign on kickstarter, as one of the first German companies. Additional investors followed. With a head quarter in Hamburg and production facilities in the south of Germany the company works with a team of 18 employees spread out through Europe. For more information visit www.mellowboards.com.Mellow Boards GmbH – The Endless Ride Johannes Schewe Waterloohain 3 22769 Hamburg, Germany press@mellowboards.com

01-28-2016 | Sports
Mellow Boards GmbH
Mellow Boards brings the asphalt surf to the next level
A startup of boardsports enthusiasts from Hamburg is about to bring the concept of electric driven skateboards to a whole new level. They developed the first mountable drive that turns any normal skateboard into an electric skateboard – in a blink of an eye. Half a year after their successful Kickstarter campaign they now release their next milestone on their way to serial production: the final design. In late spring 2015

09-02-2020 | Industry, Real Estate & Constr …
Gebäudereinigung Ruiz Hamburg
Gebäudereinigung Hamburg - About us
Gebäudereinigung Hamburg – No more dirt! We at Ruiz are your reliable cleaning company and take care of every type of building cleaning. No matter if it’s about office cleaning, maintenance cleaning or glass cleaning – we provide the right personnel, equipment and know-how. We will be happy to make you an appropriate offer. Just give us a call or we send you a non-binding quote online. That’s what we’re offering you: Building
08-30-2018 | Business, Economy, Finances, B …
Skyfi
BLOCKCHANCE Conference Hamburg 2018 - a full success!
The first BLOCKCHANCE Conference on August 24 and 25 in Hamburg, with the topic ‘the future of economics’ was a great success with over 350 attendees, 35 speakers and exhibitors and more than 25 press members and media agencies. It was the biggest blockchain conference in north Germany in 2018. Next step: BLOCKCHANCE Conference Hamburg 2019 on August 23 and 24 – save the date. BLOCKCHANCE Conference Hamburg 2018 gallery
07-04-2018 | IT, New Media & Software
Skyfi
BLOCKCHANCE Conference Hamburg 2018
BLOCKCHANCE Conference, August 24th-25th 2018 in the HafenCity of Hamburg with subtitle, ‘Bitcoin was just the beginning - blockchain is the future of economics’, shows the socio-economic impact of the coming blockchain revolution. Plus free Skycoin Miner Hardware and VEGANcoins giveaway Hamburg, July 4th 2018 - The BLOCKCHANCE Conference Hamburg 2018 ‘The future of economics’ opens its doors for two days at August 24th and 25th. It creates a platform
04-21-2011 | Business, Economy, Finances, B …
German-Indian Round Table (GIRT)
Indo-Hamburg Relations: On A Promising Path?
GIRT Hamburg invites Consul General Subashini to share views on India’s ties with Hamburg, on May 2, 2011 Hamburg (19.04.2011): India’s emergence as an increasingly open and growing economy has led to a more active interaction with Germany. The liberalization of India’s economy and the ensuing growth in the bilateral trade has opened new avenues for cooperation not only in the business sector but also in other social and cultural spheres.
12-01-2010 | Arts & Culture
PHOTO+ART BOOK HAMBURG
PHOTO+ART BOOK HAMBURG 2011 in Germany
From 2nd – 4th September 2011 the Haus der Photographie, Deichtorhallen Hamburg, Germany celebrates the premiere of the PHOTO+ART BOOK HAMBURG. This new fair focuses on the printed publication as an autonomous form of artistic expression. It accommodates not just a variety of exciting stalls but also offers exhibitions, workshops, lectures and booksignings. The PHOTO+ART BOOK HAMBURG addresses professionals, artists, creative individuals, printers, interested amateurs as well as book and
04-22-2010 | Arts & Culture
PHOTOBOOK DAYS 2010
Premiere PHOTOBOOK DAYS 2010 in Hamburg, Germany
The Photobook Days will be opened for the first time in the Deichtorhallen Hamburg 4th-6th June 2010. The venue is the House of Photography in the Deichtorhallen Hamburg. For three days the visitors will receive an extensive program: Lectures, book signings, dummy sightings, a photo book award, photo book fair and exhibitions. The Photobook Days 2010 are honoring the independence of photo books by dedicating this festival to it.
Comments about openPR
I can't but agree to the positive statements about your portal: easy to use, clear layout, very good search function, and quick editing!
Jens O'Brien, Borgmeier Media Communication