THE SOPRANOS “UNCLE JUNIOR” LIVE AT MCFADDEN’S SALOON EVERY TUESDAY 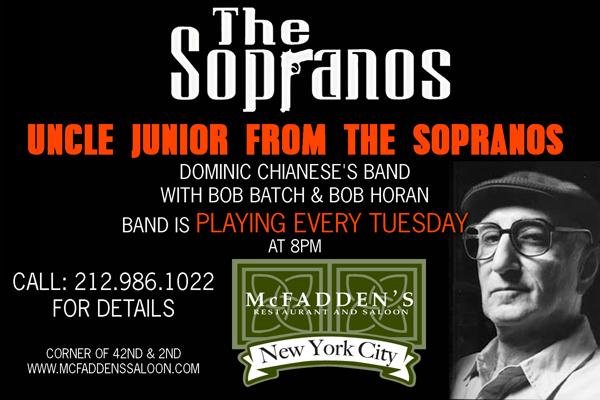 New York, NY – After 6 seasons on the Sopranos, Uncle Junior, may finally have found his way "home" at New York City's wildest Irish Pub, McFadden's Saloon. Dominic Chianese, who played Tony's uncle turned enemy, Corrado Soprano, Jr, has a long and distinguished resume as an actor. At the age of 70 he released his first album titled Hits. A healthy mix of traditional Neapolitan ballads, country/folk music, and popular covers, Uncle Junior is surprisingly very talented and impressively entertaining. Chianese plays every Tuesday night at McFadden's, located at 800 2nd Ave (corner of 42nd and 2nd) at 8pm, with Bob Batch and Bob Horan. It’s not every night you meet a real Soprano and the fact that his music is better than most popular current bands is just icing on the cake. This is well worth the trip out on a Tuesday night. For more information or to schedule an interview with Elizabeth Wittels, please call 212.986.2220.or email ewittels@gmail.com.800 Second Ave ♦ 212.986.1515 ♦ www.mcfaddenssaloon.comContact: Elizabeth Wittels Office: 212.986.2220 Cell: 917.405.6122 Email: ewittels@gmail.comMcFadden’s Saloon was first established in 1977. The owners have since opened up locations in Philadelphia, Washington DC, Boston, Chicago, Columbus, Nashville, and Las Vegas (December 2007)