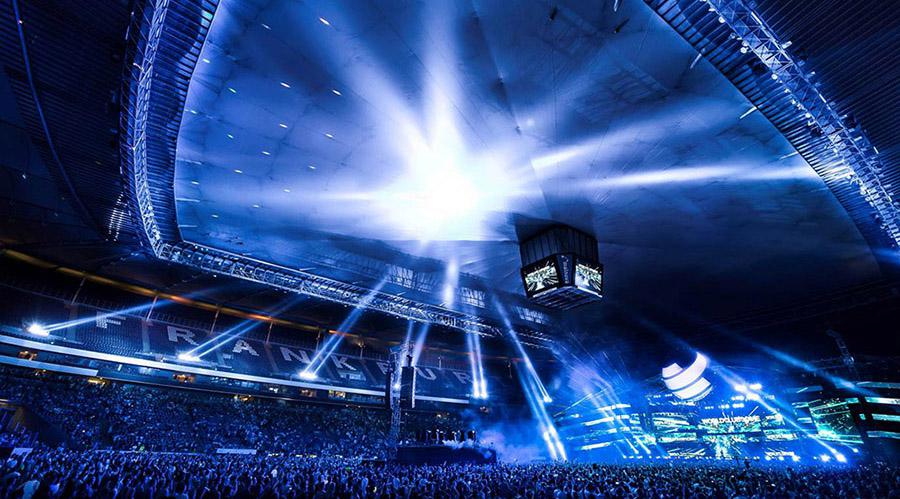 June 2015, Frankfurt, Germany – With a light show newly conceived by A&O Creative for the grand opening and closing ceremonies of the World Club Dome 2015, BigCityBeats managed to give ravers in the Frankfurt Commerzbank Arena goose pimples.BigCityBeats has long been synonymous with major opening and closing shows designed by its initiator and organizer Bernd Breiter. Working with A&O Creative this year they really excelled themselves in terms of both effect and magnitude. True to its motto “higher, faster, further”, the company assembled for the World Club Dome live show the largest constellation of luminaires ever deployed for an event of its kind. A&O Creative, the creative department of the internationally active, Bremen-based lighting specialists A&O Technology, under the creative direction of the renowned lighting designer Manfred “Ollie” Olma, delivered in the form of its newly conceived light show “Big City Lights” one of the highlights of both the opening and closing ceremonies of the World Club Dome. The impressive images of light that flooded the arena were enough to give spectators goose pimples. The video content was created by Saskia Olma, whilst Marco Niedermeier, the CEO of A&O Technology, was active in the role of Executive Producer.“We provided the illumination from inside, yet to spectators it appeared as though it were happening outside, the arena. It is not just an architectonic 3D light but extends into 4D and 5D. Spectators are given the impression that they are travelling in time. Based on the interaction of lighting, video, laser and pyrotechnics, the guiding leitmotif for the lighting design stemmed from the doctrine of the Four Elements. It was supported by powerful sound,” recalls Olma.In all, A&O Creative installed almost a hundred FALCON searchlights from event partner A&O Technology in the main stage area of the Commerzbank Arena, which for three days became the world’s biggest club. Among them were a LED band made up of Video FALCONs at the front of the main stage. FALCON BEAM and FLOWER units completed the multi-level constellation. According to the organizers, some 100,000 visitors (up to 40,000 per day) attended at least one of the shows in the metropolis on the Main river over the course of the weekend, occupying the 500,000-square-metre party area to hear some of the most famous EDM DJs and live acts in the world, including stars such as Avicii, David Guetta, Faithless and Hardwell. “BigCityBeats has long been distinguished by its self-composed intro. It is the highpoint of every show and conveys that ‘weekend feeling’, which we like to call ‘big city beats’, directly to the hearts of all who witness it. For the BigCityBeats World Club Dome, we developed an opening and closing show with maximum emotional impact. And thanks to A&O, a magnificent team and incredible equipment (including a multitude of high-powered lamps), we managed to create together a new type of spectacle. The BigCityBeats World Club Dome has drawn a massive response worldwide. I’d like to thank most warmly A&O, Marco Niedermeier, Ollie Olma and the entire team that contributed to the realization of my dream,” says Bernd Breiter, CEO of BigCityBeats.About A&O Technology For twenty years, A&O Technology has been providing regional and international support for even the most demanding projects in the field of architectural or events lighting: from the supply of equipment – whether sale or rental – to the elaboration of creative concepts, to the provision of full-service support in the role of general contractor.The clear division of the company into sales, rental, creative and manufacturing departments guarantees customers communication backed by expertise and efficient solutions at every stage of a project.A large network of tried-and-tested partnerships is available to support your projects. The company’s exclusive distribution portfolio includes the FALCON® range of architectural luminaires and searchlights manufactured by the A&O subsidiary alpha one.A&O Technology has its headquarters in Bremen, Germany, as well as subsidiaries or bureaus in the UAE, USA, Russia and Asia and holds project partnerships worldwide.A&O Lighting Technology GmbH, Arberger Hafendamm 22, 28309 Bremen, Germany, Telephone: +49 (0)421 / 59 66 09-0, Internet www.ao-technology.com, contact: Ljiljana Jurkovic

10-19-2020 | Health & Medicine
myriamed GmbH
myriamed supports local soccer club
myriamed supports the local soccer club SV Puma with a small donation to help them buy new sportswear. We hope that the COVID-19 pandemic will be over soon and team sports can take place again. About myriamed: myriamed has unique expertise in research and development of human induced pluripotent stem cells (iPSC), including genome edited lines, and in the controlling of their fate as to the differentiation into defined cellular lineages
01-02-2018 | Sports
Golf Clubs
Global and Japan Golf Clubs Market By Club Classification - Wood Club, Irons Clu …
Researchmoz added Most up-to-date research on "Global and Japan Golf Clubs Market By Club Classification - Wood Club, Irons Club, Wedge Club, Putt Club and Other (Iron Wood Club, Pole Club)" to its huge collection of research reports. The global Golf Clubs market is valued at XX million USD in 2016 and is expected to reach XX million USD by the end of 2017, growing at a CAGR of XX% between
09-21-2016 | Business, Economy, Finances, B …
The Binary Trading Club is Open to new Members
Binary Trading Club
The Binary Trading Club is now open to new members. For a limited time period only, investors who have an interest in Binary Options and Forex trading can apply to become a member of their exclusive community. In order to become a member of the Binary Trading Club, one has to visit their website and fill out their form with the relevant information. Once complete, you will be contacted by someone
05-23-2016 | Fashion, Lifestyle, Trends
The Waters AL
Kids’ Club at The Waters
Location : 3 Crescent Park, Pike Road, AL 36064, Contact No. 334.272.3200 Date : Friday, May 27th at Noon The Water is organized the Kids’ Club at The Waters event. This is good information for kids because School's almost out, have you become your summer plans? See your calendars and mark them – We have got a number of amazing Blue Heron Pool club & Lucas Point Pool event organized
09-20-2013 | Leisure, Entertainment, Miscel …
Camp Pa-Qua-Tuck
Moriches Rotary Club Hosts Oktoberfest
(Center Moriches, NY) — The Rotary Club of the Moriches is hosting its annual Oktoberfest on September 27-29 at Camp Pa-Qua-Tuck, located on Chet Swezey Road. The times for Oktoberfest are as follows: September 27, 6 p.m. to 11 p.m. September 28, noon to 11 p.m. September 29, noon to 9 p.m. The three-day event will include German food, beer gardens, a carnival, vendors, live German entertainment and more. Admission is
08-29-2013 | Leisure, Entertainment, Miscel …
Press Club Hanoi
Press Club Cooks German Favorites
HANOI, Vietnam -- Full-bodied flavours, free beers and friendly meet-ups are all part of an early Oktoberfest celebration the Press Club has planned for September. From Sept. 23 to 29, the Press Club is inviting diners in Hanoi to a ‘Flavors of Germany’ showcase, with German specialties served right in the heart of the Vietnamese capital. Throughout the week, chefs will be tossing sausage salad with mustard seed dressing, roasting sauerbraten,
Comments about openPR
Your portal is fast, simple, and easy to use. Others may have more functions but they also demand more editing time, you have to preformat the text in order to achieve a good result etc. I think openPR is really fantastic!
Andreas Knepper, wallmedien AG