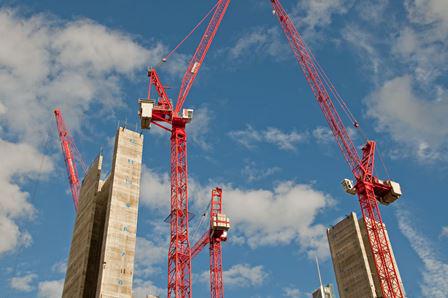 Familiar picture in the city of London: WOLFFKRAN luffers at a construction site. (Source: WOLFFKRAN)

Sheffield (UK)/Zug (Switzerland) – May, 2015. On May 14, 2015 WOLFFKRAN acquired the business of the UK tower crane rental company HTC Plant Ltd. With an annual turnover of more than GBP 40 million, a fleet of over 200 WOLFF tower cranes, a staff of 370 crane experts and 50 years of market experience HTC perfectly complements the global growth strategy of the German premium tower crane manufacturer WOLFFKRAN. Due to the longstanding partnership between the two companies and the strong position of HTC as a leading tower crane rental company in the UK no changes are planned in the current business operations. Customers in the UK will benefit from the strategic fit and the long term investment.The acquisition coincides with HTC’s 40th anniversary as WOLFFKRAN dealer and stands for the continuation of a successful business model in the UK. The sight of impressive red WOLFF tower cranes will thus continue to be a familiar one across the skyline of London.HTC WOLFFKRAN Limited – a winning combinationWith a fleet of more than 200 WOLFF cranes and a staff of 370 crane experts HTC offers complete tower crane solutions tailored to its customers’ needs. Dr. Peter Schiefer, CEO and owner of WOLFFKRAN: “The acquisition is a big step for WOLFFKRAN, but a very logical one. It’s totally in line with our global strategy of manufacturing, selling, renting and providing related crane services. With HTC we are taking an experienced and highly motivated management team and an extremely skilled work force on board. And the solid UK construction market was just another driver for our decision.“ The name of the new company will be HTC WOLFFKRAN Limited and reflects the combination of high standing expertise in delivering safe and effective tower crane services from HTC paired with state of the art tower crane technology from WOLFFKRAN.Dave Holder, Managing Director of HTC, explains: “WOLFFKRAN has been the tower crane manufacturer of our choice for decades. Its reliable and state of the art cranes are the ideal fit for our 'be the best' culture. Becoming a fully integrated part of the WOLFF family fills us with pride and confidence.“WOLFF luffers – made for "the city"HTC’s crane portfolio predominantly consists of WOLFF luffing jib cranes that – based on their particular construction – are ideal for construction jobs in tight urban spaces, all the more so in countries with stringent overslewing laws such as the UK. Both older generation and new WOLFF luffing jib cranes are currently in operation on various high-profile constructions sites in London, such as London Bridge Station, Nine Elms Redevelopment or Nova Victoria Development, to name just a few.With the integration of HTC’s crane fleet, WOLFFKRAN’s global rental fleet will count more than 750 tower cranes, underlining its position as one the largest tower crane rental companies in the world.Acquisition emphasizes the global expansion of WOLFFKRANWith this acquisition WOLFFKRAN continues its international growth path, which is currently also being fuelled by an increasing demand for high lifting capacity luffing jib cranes, not only in the UK. Demand from Saudi Arabia has been more than solid, with 150+ high lift capacity WOLFF cranes sold into the market over the last few years for large scale construction jobs in Mecca and Jeddah, as for example the Kingdom Tower, which will rise to 1,000 meters, making it the tallest building in the world. However, demand from other markets is on the rise as well. With construction activity in the US picking up, several WOLFF luffers were sold for high-rise projects in San Francisco and New York, where WOLFFKRAN has recently opened its own branch office. New WOLFF luffers are also in operation in Macao on various hotel construction sites. But demand is not only coming from the high-rise sector, with four brand new WOLFF 1250 B, one of the strongest tower cranes in the world, currently being delivered to South Africa for a power plant construction job.About WOLFFKRANWith a tradition of over 150 years WOLFFKRAN is one of the leading manufacturers and rental companies of high-quality tower cranes in Central and Eastern Europe, the Middle East, North America, Australia and Hong Kong. The worldwide rental fleet comprises more than 750 WOLFF cranes. It is headquartered in Zug (Switzerland) and has manufacturing site in Heilbronn and Luckau (Germany), as well as international subsidiaries and partnerships around the world. It employs a global workforce of approx. 900 people.About HTC PlantHTC (Harrington Tower Cranes) was formed in 2002 when PC Harrington Group acquired the tower crane division of Hewden Stuart, the equipment arm of Finning Group. PC Harrington retained the WOLFFKRAN distribution agreement as part of the acquisition enabling HTC to be the exclusive distributor for the WOLFF tower cranes in the UK. HTC Plant offers the complete package from single crane to multi cranes site, from internal to external climbing cranes and from static to rail mounted cranes all from a purpose built facility in Sheffield. HTC has an ever expanding fleet of over 200 cranes made up of luffing jib and trolley jib top slewing cranes up to 50 tonnes in capacity.WOLFFKRAN International AG Simone Engleitner International Marketing Baarermattstr. 6 Ch-6300 Zug Tel + 41 41-766 85 00 Fax + 41 41-766 85 99 s.engleitner@wolffkran.com www.wolffkran.comPress Contact:Sarah Spitzl-Kirch Rumfordstr. 5 D-80469 München Tel + 49 9721 67 98 587 Fax + 49 89-23 23 90 99 spitzl-kirch@headline-affairs.de www.headlineaffairs.de

09-06-2012 | Industry, Real Estate & Constr …
WOLFFKRAN International AG
New landmark for the Main metropolis – WOLFFKRAN luffing cranes in skyscraper …
Frankfurt am Main – August 2012. Since April last year a new high-rise has been reaching for the sky in Germany’s financial capital Frankfurt. Ed. Züblin AG is building the 170 meter TaunusTurm on Neue Mainzer Straße which will accommodate offices, apartments and restaurants. The company has worked together successfully with German premium manufacturer WOLFFKRAN for many years now. A pack of red WOLFFs is therefore also at work
09-06-2012 | Business, Economy, Finances, B …
WOLFFKRAN International AG
The new WOLFF’s den – WOLFFKRAN moves into new branch office in Dubai
Dubai – July 2012. Six years ago in the United Arab Emirates the foundation was laid for a unique alliance. In 2006 WOLFFKRAN and Kanoo Group founded the joint-venture WOLFFKRAN Arabia to serve the UAE with premium tower cranes made in Germany. First contracts were won in 2007 and WOLFF cranes erected that same year. Initially operating out of Abu Dhabi, a branch office was soon opened in Dubai. This
09-21-2011 | Industry, Real Estate & Constr …
WOLFFKRAN International AG
BKL expands its premium segment with WOLFF cranes – long term partnership agre …
Zug, September 2011 –WOLFFKRAN AG establishes itself in the rental and sales fleet of Baukran Logistik GmbH BKL, one of Europe’s largest crane logistics companies, with its top-quality tower cranes. The new customer, a professional full service provider in the crane leasing sector, represents a significant win for WOLFFKRAN. BKL, as an international crane service company, is pursuing the objective of uniting the leading European crane manufacturers under one
09-01-2011 | Industry, Real Estate & Constr …
WOLFFKRAN International AG
New customer for WOLFFKRAN in Frankfurt - FABER & SCHNEPP buys its first WOLFF
Frankfurt – August 2011. The municipal fire department of Frankfurt is expanding its facilities with a new training center situated adjacent to the current training and administration building. The construction work is scheduled to be completed by fall 2012. In order to realize this project, the mid-sized construction company FABER & SCHNEPP Hoch- und Tiefbau GmbH & Co. KG in Gießen, which received the contract for carrying