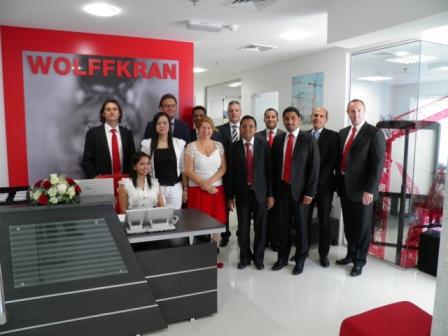 Dubai – July 2012. Six years ago in the United Arab Emirates the foundation was laid for a unique alliance. In 2006 WOLFFKRAN and Kanoo Group founded the joint-venture WOLFFKRAN Arabia to serve the UAE with premium tower cranes made in Germany. First contracts were won in 2007 and WOLFF cranes erected that same year. Initially operating out of Abu Dhabi, a branch office was soon opened in Dubai. This year WOLFFKRAN Arabia moved into new offices in Dubai, which also house the Rep Office of WOLFFKRAN serving Saudi Arabia, the rest of the Middle East, India and Africa. With the inauguration of the new office in Dubai WOLFFKRAN gears up to offer even more and improved services in the region.With the new premises in the heart of Dubai WOLFFKRAN aims to strengthen its position in the Gulf region and to develop new markets in Saudi Arabia, Middle East, India and Africa. “The Middle East region is one of the key regions in my eyes right now”, said Dr. Peter Schiefer, Managing Partner and CEO of WOLFFKRAN, at the launch. “We felt that we needed to have a big presence. Dubai is a natural hub, since you’re going to find a lot of people from different nations. It seems to be a melting pot now, so it’s a perfect initial position for our growth course”, said Schiefer.WOLFFKRAN Arabia – where 150 years of German engineering expertise meets a strong local networkOver 150 crane assemblies, 50 employees, numerous regional cooperations and an outstanding market position stand for the proven track record of WOLFFKRAN Arabia in the past six years. The alliance between WOLFFKRAN and the Kanoo Group is the only joint venture in the entire region with the actual manufacturer as a shareholder and part of the core business. This provides not only a great advantage for the customer but also the key to success, as Managing Director Martin Kirby of WOLFFKRAN Arabia explains: “The clients benefit from our broad network as well as from over 150 years of engineering expertise Made in Germany. We act as consultants and service providers. Thanks to our outstanding technical know-how and best quality we are able to implement solutions according to the demands of the individual projects”, says Kirby. At the same time WOLFFKRAN Arabia is not only guaranteeing high performance on the construction site but is also providing analyses and project evaluation at tender stage for a high level of certainty and efficiency already in planning of the construction site.WOLFFKRAN – the leader of the pack in all-inclusive-serviceThis business model of WOLFFKRAN Arabia is also the best solution in turbulent economical periods. “Most of the contracts nowadays are rental contracts”, states Kirby. “In times of economic difficulties contractors have a preference for utilizing suppliers with all-inclusive-packages including the crane, the crew and the customer service. This frees them of the need to maintain their own assembly crew and the liabilities that this comes with.” WOLFFKRAN Arabia takes this development into account with the establishment of the new branch offices in Dubai.Even more service in the future – full order books confirm WOLFFKRANs growth courseWith the new premises the local service performance will be supplemented by training facilities for operators and engineers, new technical support offers such as hook time analysis and a 24-hours customer service. “Furthermore we strive to maximize our safety protocols and pride ourselves in almost no downtimes”, says Kirby.The expansion of the premium manufacturer is confirmed by the solid demand for the red giants. At present WOLFFKRAN Arabia is involved in several prominent job sites like the Burj Residences, the Mafraq Hospital and the Abu Dhabi Islamic Bank.About WOLFFKRAN Arabia:Established in December 2006 in Abu Dhabi and Dubai, Wolffkran Arabia is a joint venture company between the tower crane manufacturing giant WOLFFKRAN from Germany and the Kanoo Group, one of the largest and most successful, longest independently run family owned businesses currently operating in the GCC region.About WOLFFKRAN INTERNATIONAL AG: With a tradition of over 150 years WOLFFKRAN is one of the leading manufacturers and rental companies of high-quality tower cranes in central and eastern Europe, the Middle East, North America, Canada, Australia and Hong Kong. The worldwide rental fleet comprises more than 550 WOLFF cranes. With its corporate headquarters in Zug (Switzerland) and manufacturing plants in Heilbronn and Luckau (Germany) and its international subsidiaries, the company employs a global workforce of approx. 450.WOLFFKRAN International AG Simone Engleitner International Marketing Baarermattstr. 6 Ch-6300 Zug Tel + 41 41-766 85 00 Fax + 41 41-766 85 99 s.engleitner@wolffkran.com www.wolffkran.com

06-03-2015 | Industry, Real Estate & Constr …
WOLFFKRAN International AG
Rising to new heights in the UK – WOLFFKRAN acquires the business of HTC
Sheffield (UK)/Zug (Switzerland) – May, 2015. On May 14, 2015 WOLFFKRAN acquired the business of the UK tower crane rental company HTC Plant Ltd. With an annual turnover of more than GBP 40 million, a fleet of over 200 WOLFF tower cranes, a staff of 370 crane experts and 50 years of market experience HTC perfectly complements the global growth strategy of the German premium tower crane manufacturer WOLFFKRAN. Due
09-06-2012 | Industry, Real Estate & Constr …
WOLFFKRAN International AG
New landmark for the Main metropolis – WOLFFKRAN luffing cranes in skyscraper …
Frankfurt am Main – August 2012. Since April last year a new high-rise has been reaching for the sky in Germany’s financial capital Frankfurt. Ed. Züblin AG is building the 170 meter TaunusTurm on Neue Mainzer Straße which will accommodate offices, apartments and restaurants. The company has worked together successfully with German premium manufacturer WOLFFKRAN for many years now. A pack of red WOLFFs is therefore also at work
09-21-2011 | Industry, Real Estate & Constr …
WOLFFKRAN International AG
BKL expands its premium segment with WOLFF cranes – long term partnership agre …
Zug, September 2011 –WOLFFKRAN AG establishes itself in the rental and sales fleet of Baukran Logistik GmbH BKL, one of Europe’s largest crane logistics companies, with its top-quality tower cranes. The new customer, a professional full service provider in the crane leasing sector, represents a significant win for WOLFFKRAN. BKL, as an international crane service company, is pursuing the objective of uniting the leading European crane manufacturers under one
09-01-2011 | Industry, Real Estate & Constr …
WOLFFKRAN International AG
New customer for WOLFFKRAN in Frankfurt - FABER & SCHNEPP buys its first WOLFF
Frankfurt – August 2011. The municipal fire department of Frankfurt is expanding its facilities with a new training center situated adjacent to the current training and administration building. The construction work is scheduled to be completed by fall 2012. In order to realize this project, the mid-sized construction company FABER & SCHNEPP Hoch- und Tiefbau GmbH & Co. KG in Gießen, which received the contract for carrying