A&O Creative, with A&O Technology as Technical General Contractor for Fireworks by Grucci, stages an unprecedented multimedia show on the occasion of the Saudi National Day in Riyadh 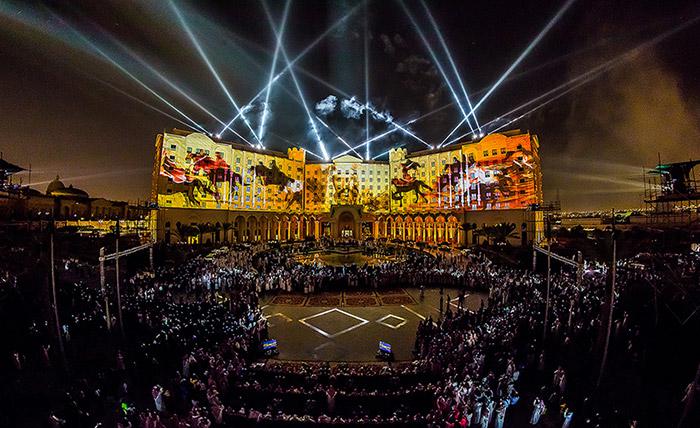 September 2014, Saudi Arabia - The palatial Hotel Ritz-Carlton Hotel in Riyadh provided the backdrop recently for an impressive multimedia spectacle. It was the first time in Saudi Arabia that the different disciplines within a show were seen to interact. To get a show in this unprecedented form up and running, A&O Technology summoned its best creative minds. The well-drilled A&O Creative team put together a complex multimedia show despite a very tight time frame of only four weeks. Whilst in classic productions, the disciplines (lighting, pyrotechnics, music...) take turns to occupy centre stage, the Saudi royal family, represented here by the Governor of Riyadh, Prince Turki bin Abdullah bin Abdul Aziz, wanted something very special for this event: that all the professions should interact. So A&O Creative created the artistic concept for a show of exceptional quality to mark the 82nd anniversary of the formation of the Kingdom of Saudi Arabia. At the same time, an extensive 3D mapping show was staged at the hotel in the Saudi capital. The show’s Creative Director was the renowned lighting designer Jerry P. Appelt, who took charge of both the show concept and the lighting design. The entire ochre front facade of the hotel complex was used here as a projection surface. As though on an oversized movie screen, the past, present and future of Saudi of Arabia with its capital Riyadh were depicted in sublime images and video sequences - accompanied by gripping music. Lights visible for miles around and an impressive firework display crowed the show, which drew an enthusiastic reception from the cream of Saudi society.Aside from its creative contribution, A&O Technology was acting here as all-in-one supplier of the lighting, video and laser equipment. The magnificent fireworks were provided by the pyro specialists Fireworks by Grucci. "We worked hand-in-hand with Grucci to ensure the various elements of the show were perfectly coordinated. After collaborating with them on the projects for National Day in Doha and the 2013/14 New Year’s Eve celebrations at the Hotel Atlantis The Palm in Dubai, National Day in Riyadh was yet another joint project for the portfolio" says Marco Niedermeier, CEO of A&O Technology.About A&O Technology For almost twenty years, A&O Technology has been providing regional and international support for even the most demanding projects in the field of architectural or events lighting: from the supply of equipment – whether sale or rental – to the elaboration of creative concepts, to the provision of full-service support in the role of general contractor.The clear division of the company into sales, rental, creative and manufacturing departments guarantees customers communication backed by expertise and efficient solutions at every stage of a project.A large network of tried-and-tested partnerships is available to support your projects.The company’s exclusive distribution portfolio includes the FALCON® range of architectural luminaires and searchlights manufactured by the A&O subsidiary alpha one.A&O Technology has its headquarters in Bremen, Germany, as well as subsidiaries or bureaus in the UAE, USA, Russia and Asia and holds project partnerships worldwide. For more information about the company A&O Technology please visit the website www.ao-technology.comA&O Lighting Technology GmbH, Arberger Hafendamm 22, 28309 Bremen, Germany, Telephone: +49 (0)421 / 59 66 09-0, Internet www.ao-technology.com, contact: Ljiljana Jurkovic

You can edit or delete your press release A&O Creative, with A&O Technology as Technical General Contractor for Fireworks by Grucci, stages an unprecedented multimedia show on the occasion of the Saudi National Day in Riyadh here

02-04-2021 | Advertising, Media Consulting, …
Ken Research Pvt Ltd
Saudi Arabia Agriculture Market, Saudi Arabia Agriculture Industry, Saudi Arabia …
Saudi Arabia Agriculture is focussed on the spread of dates, dairy farm merchandise, eggs, fish, poultry, vegetables, and flowers to markets round the creation because it has attained its own potency within the production of such merchandise. The private sector additionally plays a role within the nation's agriculture, because the government offers long-term interest-free loans and inexpensive water, fuel, electricity, and duty-free imports of raw materials and machinery. Over the past
08-31-2017 | Industry, Real Estate & Constr …
Market Research Hub
Saudi Arabia Infrastructure Research Report
The report provides a detailed analysis of the Infrastructure sector in Saudi Arabia, including the state of current infrastructure, the regulatory and financing landscapes, forecast spending across all key sectors and the major projects in the construction pipeline. Request A Free Sample Report- http://www.marketresearchhub.com/enquiry.php?type=S&repid=1311098 The report covers all key infrastructure sectors: roads, railways, electricity and power, water and sewerage, communication, and airports and ports. Summary With a young and growing population, together with rapid
08-17-2016 | Leisure, Entertainment, Miscel …
LastThink
Saudi Arabia Radio LIve
Saudi Arabia Live Radio is created for the sake of our contemporary users to accommodate their demands and expectations. This innovative application is full of comprehensive Radio Stations, which are renewed and extended from time to time by the sophisticated professionals. The following app is absolutely free of charge and provides you with an exclusive opportunity to listen to your favorite music and newsworthy programs, as well as news from
06-21-2016 | Business, Economy, Finances, B …
Nispana
Saudi Privatization Summit 2016 – “Unlocking the hidden potential of Saudi A …
The current oil catastrophe and economic stress is compelling Saudi Arabia to transform and is set to create the World's biggest and Middle East’s strongest Sovereign Wealth Fund by welcoming International investments and privatizing state-owned companies. The Kingdom envisions to increase non-oil revenue to USD 120 Billion per year, by 2020 and a six-fold growth to USD 266 Billion per year by 2030. Diversifying traditionally-oil based economies and reducing the
01-24-2013 | Science & Education
RNCOS E-Services Pvt. Ltd.
Booming Education Sector in Saudi Arabia
According to a new research report by RNCOS, “Saudi Arabia Education Forecast to 2016”, Saudi Arabia is presently regarded as the most lucrative market for education services in the GCC. The report revealed that, the improving infrastructure and increasing government support are contributing to the growth of education sector in the Kingdom. Moreover, during our analysis, it was found that rapidly increasing demand for skilled personnel across various industry verticals
12-19-2012 | Science & Education
RNCOS E-Services Pvt. Ltd.
Saudi Arabia Education Forecast to 2016
RNCOS has recently added a new Market Research Report titled, “Saudi Arabia Education Forecast to 2016” to its report gallery. Saudi Arabia, the most populated country in the Gulf Cooperation Council (GCC), represents the largest education industry in the region. With majority of the Kingdom’s population below the age of 25, the country’s education sector holds immense growth potential. According to our latest research report “Saudi Arabia Education Forecast to
Comments about openPR
We publish our press releases on openPR.de because we like people who are "open" - just like us.
Frank Obels, CEO, INCONET - Informationssysteme, Communication und Netzwerkberatung GmbH