MAHALLA IS A SECULAR, MODERN MECHANISM OF SELF-GOVERNANCE


Press release from: Embassy of Uzbekisan in Berlin 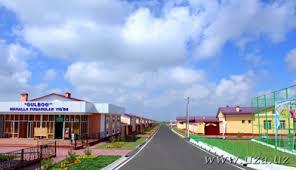 The view of the modern uzbek mahalla

You can edit or delete your press release MAHALLA IS A SECULAR, MODERN MECHANISM OF SELF-GOVERNANCE here

More Releases from Embassy of Uzbekisan in Berlin

05-04-2017 | Tourism, Cars, Traffic
Embassy of Uzbekisan in Berlin
"Atlas Bairami" Festival
"Atlas Bairami" festival will be held from 15 to 17 September in the city of Margilan. The festival is held from 2015. "Atlas Bairami" festival contributes to the further development and popularization of national handicraft and tourism, the expansion of cooperation between artisans. Leading masters of traditional textile and clothing design, artisans, art scientists, art managers, specialists in the field of traditional crafts management take part in the festival. During the festival master
05-29-2006 | Politics, Law & Society
Embassy of Uzbekisan in Berlin
Uzbek President's Book Presented in Kuwait
President of Uzbekistan Islam Karimov’s book “The Uzbek people will never depend on anyone” was presented at the Kuwait National University. The representatives of the Kuwait government, social and political figures, teaching faculty at the university, heads of diplomatic missions and members of Uzbek delegation led by the State adviser to the President of Uzbekistan Mr. Shukhrat Yovkochev attended the presentation. [in Uzbek] [in Russian]The Rector of the Kuwait
05-26-2006 | Business, Economy, Finances, B …
Embassy of Uzbekisan in Berlin
Uzbek president receives head of German business delegation
President of Uzbekistan Islam Karimov received chairman of Committee on Eastern European Economic Relations (Germany) Klaus Mangold at presidential resident Oqsaroy on 23 May. Uzbek leader pointed out, that Germany is one of the main trade and economic partners of Uzbekistan. \"Each your visit gives new rates to mutual cooperation,\" said Islam Karimov. \"The worthy fact, that this time the delegation, which you head, include young businessmen as well.\" During
05-09-2006 | Politics, Law & Society
Embassy of Uzbekisan in Berlin
The reform of the judicial system of the Republic of Uzbekistan
The purposeful and stage-by-stage judicial reform in the Republic of Uzbekistan has been underway since 2001. The following achievements can speak to the functioning of an independent judicial system in the Republic of Uzbekistan: constitutionally set guarantees and principles that comply with the universal norms of international law; the procedures of selection, appointment and dismissal of the judicial corps in compliance with the legislation of Uzbekistan; strict procedures, in accordance

03-09-2007 | Politics, Law & Society
The Embassy of Uzbekistan in Berlin
Social protection of the population: experience of Germany and Uzbekistan
«... social protection should not remain the business of the state organizations and authorities, institution of social security and charitable organizations only. The concept "social" concerns all of us and should be in the center of attention of all society» I.A. Karimov In the statement of the President I.A. Karimov at the ceremonial meeting devoted to the 14-anniversary of the Constitution of the Republic of Uzbekistan it is mentioned, that «... it
02-23-2007 | Politics, Law & Society
The Embassy of Uzbekistan in Berlin
Main measures on the improvement of childrens life and the implementation of «T …
Immediately upon receiving the Declaration and «The world fit for children» Plan of Actions, adopted in 2002 during a special session of the UN General Assembly on children, Uzbekistan has conducted following activity: a) the documents were thoroughly studied on national and sub-national levels including districts and mahallahs to work out concrete proposals on ensuring the implementation of Declaration’s as well as the Plan Actions provisions; b) with the aim of fulfilling the country’s
Comments about openPR
I can't but agree to the positive statements about your portal: easy to use, clear layout, very good search function, and quick editing!
Jens O'Brien, Borgmeier Media Communication