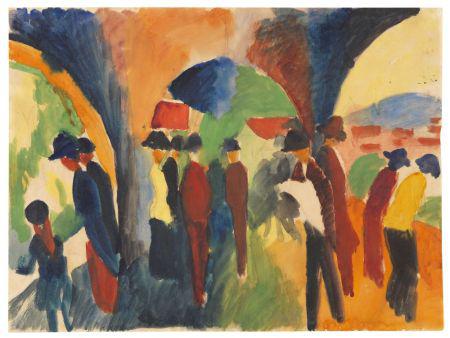 Munich, 26 September, 2014, (kk) – The jubilee auctions on December 5 and 6 make for the grand finale of the company's anniversary year. Masterpieces with estimates in 5- to 6-digit realms by renowned artists such as Macke, Nolde, Kirchner, Richter and Shiraga are the highlights of this auction which has the following sections: 1) Modern Classics 2) Post War 3) Contemporary Arton 1) Modern Classics This section is led by August Macke's gouache 'Unter den Lauben von Thun (Ein Spaziergängermotiv)' which carries an estimate of EUR 600,000-800,000. Macke had already used the theme of promenading people under the arcaded sidewalks of Thun in earlier works. However, the mere focus on the colors' values and their importance for the optical effect was new and had decisive impact on the expression’s density. The work originates from his best period of creation, it was made in 1913, the year the artist and his family moved to Hilterfingen on Lake Thun, where he found new orientation and was free from all constraints. He succeeded in rendering this new feeling on paper so much that artistic documents of his time in Thun are among the best of his entire oeuvre. Other impressive works are Alexej von Jawlensky's 'Variation: Frühling' (estimate: EUR 120,000-160,000) and Georg Tappert's 'Kauernder weiblicher Akt' (estimate: EUR 80,000-100,000) as well as Dorothea Maetzel-Johannsen's oil painting 'Akte', which will enter the race with an estimate of EUR 70,000-90,000. It is one of her extremely rare figure compositions originating from her expressionistic period of creation. The range of offerings in this section is completed by works from big names such as Ernst Barlach, Albert Birkle, Otto Dix, Dodo (=Dörte Clara Wolff), Max Ernst, Conrad Felixmüller, Ernst Ludwig Kirchner, Paul Klee, Paul Kleinschmidt, Oskar Kokoschka, Georg Kolbe and Emil Nolde. Pablo Picasso is represented with both original graphic works as well as select ceramics.on 2) Post War The top spot in this section is occupied by Kazuo Shiraga's oil painting 'Chijikusei Gotenrai'. The large-size foot painting from 1961 is among the most sought-after works by the Japanese native on the international auction market. In context of an exhibition of the Gutai group in Tokyo in 1955 he created a wax relief by means of his body's pressure and motion, before he eventually had his first foot painting performance at an Osaka gallery in 1957. In doing so the artist hangs on to a rope fastened to the ceiling and disperses oil paint over a piece of paper on the ground. Impressed by the positive feedback, he began to apply this technique on canvas as of 1959, thus laying the basis for his international breakthrough. The large-size work has been estimated at EUR 400,000-600,000.Next to several works by Gerhard Richter, who is represented with, for instance, one of his popular abstract creations from the late 1980s (estimate: EUR 80,000-12,000), works by e.g. Karl Otto Götz, Anselm Reyle, Victor Vasarely and, of course, Andy Warhol (see separate press release on the special auction) will be called up. on 3) Contemporary Art The range of offerings in this section, which had its debut with an own catalog last autumn and also realized great results in this year's spring auction, has meanwhile been expanded. Alongside Anselm Reyle's mixed media work for Otto Freundlich (estimate: EUR 40,000-60,000) and Machiko Edmondson's perfectly executed close-up 'Cascade' (estimate: EUR 10,000-15,000), which is an examination of fashion photography, as well as Fiona Rae's 'Evil dead' (estimate: EUR 12,000-15,000), it is especially works by artists such as Andrea Bender, Norbert Bisky, Martin Eder, Thoralf Knobloch, Ati Maier, David Nash, Johanna Oenicke, Cornelia Schleime, Jorinde Voigt and Matthias Weischer that are particularly captivating. Preview 04/05 November, Ketterer Kunst, Holstenwall 5, 20355 Hamburg* 08/09 November, Galerie B. von Stechow, Feldbergstr. 28, 60323 Frankfurt* 14-17 November, Ketterer Kunst, Malkastenstr. 11, 40211 Düsseldorf* 21-28 November, Ketterer Kunst, Fasanenstr. 70, 10719 Berlin* 30 Nov- 04 Dec., Ketterer Kunst, Joseph-Wild-Str. 18, 81829 Munich*** selected works ** all worksAuction in Munich 5 December - Modern Classics 6 December - Post War and Contemporary Art with extra Andy Warhol catalog (see separate press release)Since it was founded in 1954, Ketterer Kunst has been firmly established in the front ranks of auction houses dealing in fine art and rare books, with its headquarters in Munich and a branch in Hamburg. Gallery rooms in Berlin as well as representatives in Heidelberg, Düsseldorf and Modena (Italy) contribute substantially to the company's success. In addition, exhibitions, special theme and charity auctions as well as permanent online auctions on www.ketterer-internet-auctions.com are regular events at Ketterer Kunst. Robert Ketterer is auctioneer and owner of Ketterer Kunst.Contact:for press enquiries:Ketterer Kunst Joseph-Wild-Str. 18 81829 Munich Germany Michaela Derra M.A. Telefon: +49-(0)89-55244-152 (Fax: -177) E-Mail: m.derra@kettererkunst.de www.kettererkunst.de for client enquiries:Ketterer Kunst Joseph-Wild-Str. 18 81829 Munich Germany Tel. +49-(0)55244-444 Fax.: +49-(0)55244-177 E-mail: infomuenchen@kettererkunst.de