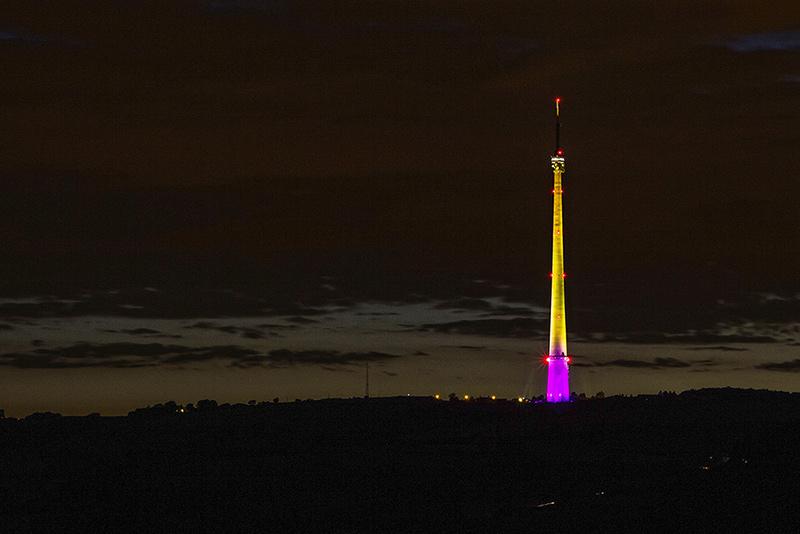 July 2014, Yorkshire, UK – HSL Group, UK based project partner of A&O Technology, supplied equipment for a bold, vibrant interactive lighting installation work – ‘Control t’force’ – created by Lighting Designer James Bawn, that illuminated the 330 metre high Emley Moor Mast in west Yorkshire UK, which is the tallest freestanding structure in the UK, an iconic local landmark and the main UHF transmitter for most of the county. Specially commissioned by TG Events on behalf of Kirklees Council as part of ‘Hypervelocity’, the 5-day grand final of the 100-day 2014 Yorkshire Festival, the Control t’force project which ran over two evenings, also celebrated the start of the 2014 Tour de France cycle race in Yorkshire. During this festival lighting designer James Brawn illuminated the Emley Moor Mast as well as the Victoria Tower at Castle Hill.To establish the exact kit needed and its optimum location for the 360 degree illumination designed to make the tapered reinforced concrete tower shine like a giant light-sabre visible for miles around, HSL supplied some sample fixtures and helped conduct a series of site tests. After this process was complete, James finalised his lighting plot. HSL kindly lent Mr. Bawn a couple of fixtures to test earlier on in the year to ensure he got the coverage he wanted. Finally he distributed 14 FALCON 6000 CMY fixtures around the base of the mast on seven stages. Each stage was 16 x 4ft. All the fixtures on site were controlled via a Jands Vista S1 lighting console.“Having used the Falcon fixtures before I was more than happy to specify them again. The tower is 330m so I knew that the fixture had to more than capable of delivering enough lumens at the top.” refers lighting designer James Bawn. He also used three FALCON BEAM colour 3,000W at the top of Castle Hill as part of the same 'Hypervelocity Festival'.James has been involved in some previous architectural lighting projects for the council and when his ideas for lighting the Emley Moor broadcast transmitting station Mast (currently owned by telecommunications and broadcast transmission company Arqiva) received the green light, he immediately turned to Simon Stuart and Mike Oates at Blackburn-based HSL to provide the equipment and additional expertise.Says Simon Stuart, “We were really excited to be involved and to help James realise such a stunning and inventive idea that made history as the first time the tower has ever been fully lit … and was enjoyed by so many people!”James not only produced a stunning piece of pop-up public art involving the Grade II listed structure, he made it a truly interactive experience utilising Kirklees Council’s events Twitter page, creating #lightthemast. This enabled people to request their favourite colours when the installation was live each night with James tweeting back as he changed the colours. The most popularly requested colour for Control t’force proved to be yellow – for the leader’s shirt of the Tour de France – closely followed by blue and pink!Says James Bawn, “The Falcons did not let me down and were a huge part of the design. The beam cut through and the colours allowed me to deliver my creative concept very easily. I utilised the superb zoom range of the fixture so I could create both a soft wash but also very thin beams for movement.”About A&O Technology For almost twenty years, A&O Technology has been providing regional and international support for even the most demanding projects in the field of architectural or events lighting: from the supply of equipment – whether sale or rental – to the elaboration of creative concepts, to the provision of full-service support in the role of general contractor.The clear division of the company into sales, rental, creative and manufacturing departments guarantees customers communication backed by expertise and efficient solutions at every stage of a project.A large network of tried-and-tested partnerships is available to support your projects.The company’s exclusive distribution portfolio includes the FALCON® range of architectural luminaires and searchlights manufactured by the A&O subsidiary alpha one.A&O Technology has its headquarters in Bremen, Germany, as well as subsidiaries or bureaus in the UAE, USA, Russia and Asia and holds project partnerships worldwide. For more information about the company A&O Technology please visit the website www.ao-technology.comA&O Lighting Technology GmbH, Arberger Hafendamm 22, 28309 Bremen, Germany, Telephone: +49 (0)421 / 59 66 09-0, Internet www.ao-technology.com, contact: Ljiljana Jurkovic