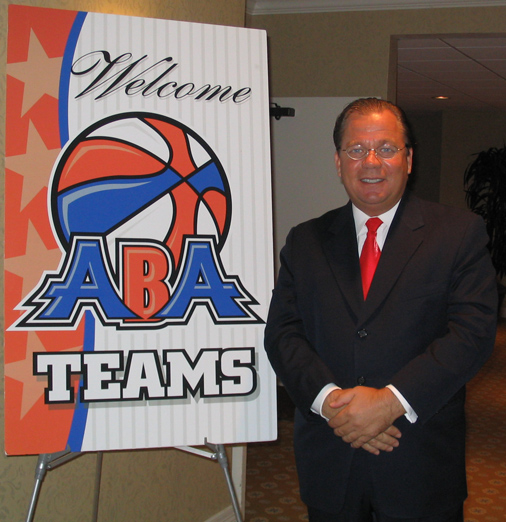 October 5, 2005 - Indianapolis, IN – On Thursday September 29, 2005, White House Hopeful Daniel Imperato attended the league-wide dinner of the American Basketball Association (ABA) as a guest of ABA Founders, Richard Tinkman, and Joe Newman. At the dinner, Imperato congratulated the ABA for their strident success of their league and took notice of the league's rapid growth. Additionally, Imperato acknowledged the positive mental attitudes of the various owners and associates of the ABA regarding the future of the league. "I commend the founders of the league for their ability to put together such a positive group of people. As a hockey player from Boston, Massachusetts, I can appreciate the teamwork needed to get the league to the level it is at. I strongly support the ABA and have offered my assistance as an advisor to the league," stated Imperato at the dinner. For the past 30 years, Imperato has advised numerous organizations ranging from Fortune 500 companies, international organizations, to student groups in order to promote global expansion and increased success. At the dinner, Imperato gave his official support to the ABA and youth sports education. "The reason for my support is clear. The ABA has been setup to be able to allow great basketball players to utilize their talents who are not able to due to the bureaucracy and limitations of the NBA. In addition, the league has a spirit and enthusiasm for the game of basketball that enables the people of the United States to connect with the players and the game. All of this while still allowing the American family the ability to afford and be able to participate in an ABA game, without the high cost associated with the NBA," commented Imperato. At the meeting, the ABA also announced its plans to take the league to nearly 70 teams and its plans to launch the 'Starz In Motion' Tour. Imperato went on to outlay his program for young people in need of financial assistance and a proper outlet for their development such as sports. "One of the issues I have with our country is that we unconditionally need to better our sports initiatives in order to provide more financial assistance and more support in the schools across the United States. We need to separate our youngsters from wrongdoing, and teach them the correct values of fair play and competition through sports," asserted Imperato. Due to the increased stresses of raising a family in today's fast-paced world, Imperato felt that parents no longer have ample time to spend with their children to teach sports. Additionally, Imperato pointed towards the high cost of equipment for some sports that have prevented young people from experiencing the joys that some sports have to offer. "As a potential candidate for the White House in 2008, and as a concerned citizen, I strongly support the initiative that needs to be taken to allow schools and their students the affordability to play sports. I also call on the teachers unions, and physical education leaders to participate in initiating a much stronger, fundamental sports education program for our children," expressed Imperato. Imperato went on to conclude his statement by saying, "I have decided after my audience here, at the ABA league meeting, to participate with the foundation association for furthering sports education in our schools and gymnasiums across the country. The strength of our country has been built on the ability of our children. The agility of our children's capability has been brought on by the experience of playing sports. I look forward to the opportunity to represent our country, support the ABA, and to protect our children's sports education programs, enabling our children of today to become our leaders of tomorrow." About Daniel Imperato Daniel was born in Boston, Mass ( 1958 ), and began his business career in 1977 transforming the manufacturing facilities in Israel through adapting them to the global marketplace along with bringing financing to the factories for global expansion. He also operated a trading company in Singapore and owned a manufacturing company in Belgium. Daniel brings over twenty-five years of experience in global business planning and development and has personal relationships at high levels around the world. Daniel has consulted for Fortune 500 corporations, with a mix of product lines, consisting of telecommunications products and services, telecommunications equipment including v-sat terminals and handheld mobile satellite telephones, along with passport and identification cards services and secure documents for foreign governments around the world. Daniel has a unique value, explosive energy and has the ability to achieve what most others cannot. Daniel is also a dedicated honorable businessperson with morals and values that are based on trust and integrity. Currently, he has organized a Presidential Exploratory Committee in order to gauge support for a possible run at the White House in 2008. This Release was approved by Imperato For President 2008, the Official Presidential Exploratory Committee for Daniel Imperato. For Media Inquiries Contact: Imperato for President 2008 Exploratory Committee Press Department 561-305-0519 imperato2008@usa.com Imperato for President Website ( "http://www.thepeoplespresident2008.com" )