Press release from: Imperato for President 2008 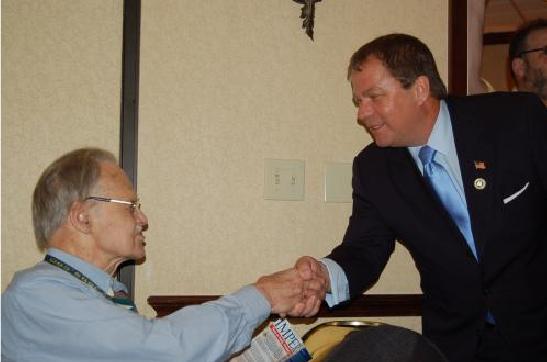 October 9, 2007 – Rome, Italy – Today the leading 2008 US Independent Libertarian Presidential Candidate Daniel Imperato announced that he will be holding his first international broadcast live from Rome this Wednesday, October 10, 2007 at 8pm EST. The webcast can be viewed live from www.imperato2008.com. Viewers can also dial in to the audio broadcast from Daniel Imperato by dialing 888-776-3766. The access code for the conference call is *8706685*. During the broadcast he will address ongoing concerns in the United States, as well as foreign relations with our international partners. While in Europe, Imperato will also be passing through Madrid and London on diplomatic matters. Upon his return to the United States on Friday, Imperato will speak at the National Hispanic Corporate Achievers 24th Annual Awards Gala. The event is the premier celebration in the U.S. for recognizing Hispanic Corporate Achievers celebrating their Excellence during Hispanic Heritage Month. The event will be held on October 12, 2007 at the Waldorf-Astoria Hotel in New York City. For more information, please contact Danny Ramos at NHCA@bellsouth.net. Then Imperato will make his way Saturday morning to Libertarian Party of Illinois Convention at Cliffbreakers Riverside Resort in Rockford, Illinois . There he will speak at the Libertarian Party Presidential Candidates forum. The Party's presidential candidate will be selected at the National Libertarian Party Convention on Memorial Day weekend, 2008, in Denver. Afterwards Imperato will leave Saturday afternoon to attend a dinner at a Hispanic Energy Conference in Las Vegas. Scheduled to deliver the keynote address at this event is California Governor Arnold Schwarzenegger.For more information on Daniel Imperato and his campaign please visit www.imperato2008.comFor Media Inquiries: i1connect Media Department www.i1connect.com press@i1connect.com 561-515-6177About Daniel Imperato (www.imperato2008.com) Daniel was born in Boston, Mass (1958), and began his business career in 1977 transforming the manufacturing facilities in Israel through adapting them to the global marketplace along with bringing financing to the factories for global expansion. Daniel brings over thirty years of experience in global business planning and development and has personal relationships at high levels around the world. He is currently a Papal Knight with honors from the Vatican, was a board member for the African Center Foundation (a United Nations NGO), the Grand Prior of the Orden Bonaria, a Ronald Reagan Gold Medal Winner, 2004 NRCC Businessman of the Year, and an ordained Chaplain for the Latin/African American Chaplains Association of New York. Presently, he has decided to seek the office of President of the United States as an Independent candidate for 2008.

You can edit or delete your press release Imperato LIVE From Rome this Wednesday – Continues Through New York, Illinois, and Las Vegas... here

More Releases from Imperato for President 2008

11-29-2018 | Business, Economy, Finances, B …
EightCap
Daniel Ricciardo becomes EightCap Official Ambassador
Australian F1® driver Daniel Ricciardo has joined forces with Forex & CFD Broker EightCap. Daniel has joined one of Australia’s fastest growing online trading companies as the official brand ambassador. “Getting to know the team at EightCap and their business made the decision a really comfortable one for me. EightCap is ambitious and just as passionate about the financial markets as I am about my career.” “Striving to be the
09-11-2012 | Politics, Law & Society
Jackson Walker L.L.P.
Jackson Walker Welcomes Daniel Nossa
Daniel Nossa joins the Energy practice and the Derivatives group in the Houston office at Jackson Walker. Mr. Nossa represents issuers, underwriters, and derivative counterparties on an array of derivative and structured finance products. He provides regulatory advice to derivative dealers and end users in the energy industry. Mr. Nossa advises numerous private and public companies in negotiating the transaction and credit support documentation related to credit, commodity, equity, and
11-24-2010 | Health & Medicine
Team Daniel Foundation
Team Daniel Foundation Debuts Revamped Magazine
Fayetteville, NC (November 23, 2010)—Team Daniel Foundation, an organization dedicated to supporting North Carolinians with developmental disabilities, has rejuvenated its quarterly magazine, EMPOWERED.The only publication in the state written specifically for the developmental disabilities community, EMPOWERED tailors its content to inform, educate and be a resource for families and individuals with developmental disabilities. The new EMPOWERED magazine is designed with a more functional and appealing layout, including new sections and powerful
09-17-2007 | Politics, Law & Society
Daniel Sheehan & Associates
Daniel Sheehan Recognized Among Texas’ Best Lawyers
DALLAS – For the fifth consecutive year, Daniel Sheehan has earned a spot on the prestigious Texas Super Lawyers listing. Mr. Sheehan, founder of Dallas’ Daniel Sheehan & Associates, LLP, is listed among the state’s top professional liability attorneys in the October 2007 issue of Texas Monthly magazine and Texas Super Lawyers magazine, a publication co-produced by the publishers of Texas Monthly and Law & Politics Media Inc. Earlier this year, approximately
07-06-2006 | Politics, Law & Society
Imperiali Organization
Daniel Imperato Launches 2008 Independent Presidential Campaign
Boca Raton, Florida -- Today, West Palm Beach, Florida businessman, Daniel Imperato officially launched his Independent candidacy for President in 2008, at the Boca Raton Resort and Club. With Vice-Presidential running mate, Webster Brooks of West Hartford, Connecticut by his side, Imperato said "It's time for Americans who are fed up with the incompetence and partisan warfare between Democrats and Republicans to create a political movement that
06-01-2006 | Politics, Law & Society
US Politics World
Daniel Imperato Seen With Italian Senator Moschetti
Rome, Italy, - May 31, 2006 - Today Daniel Imperato (www.imperatobrooks.com) was seen at the St. Regis Hotel with the Senator of Rome, Giorgio Moschetti. Senator Moschetti, who is one of the most influential senators in all of Italy, will be a key alliance for Imperato in Italy. In addition, with Imperato’s strong Catholic ties, and alliances in Rome (Imperato is also a Papal Knight, with honors from the Vatican), he could
Comments about openPR
9 o'clock: discuss press release with client, 10 o'clock: submit release to openPR, within the briefest possible time release is published and displayed in a prominent place on openPR.de. I am thrilled!
Zehra Spindler, Calypso Now! - Communication Agency