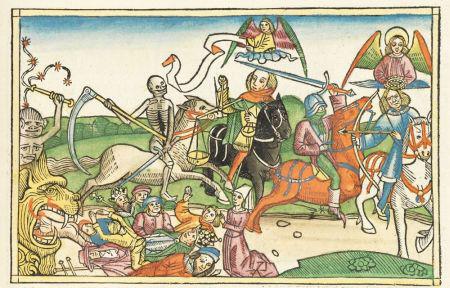 Hamburg, 04 September, 2014 (kk) – It is nothing less than one of the most important German early woodcut books. Now the printed German edition of the “Neunte Deutsche Bibel”, the only one by Anton Koberger, godfather of Albrecht Dürer, will be sold in the auction of Rare Books at Ketterer Kunst in Hamburg on 17/18 November. The remarkably well-preserved copy from 1483 was executed in a pleasing new type. With its 109 woodcuts in the text, of which 21 are kept in a lucent coloring, it has an extremely remarkable appearance and emanates a splendor that captivates readers today just as much as it did in the past. The Koberg bible counts among the most splendidly illustrated bibles of the 15th century and had substantial influence on all following editions. The estimate is at EUR 60,000.Besides a copy of the colored and annotated edition of the Nuremberg Chronicle from the library of the contemporary scholar Cincinnius, which will enter the race with an estimate of EUR 100,000, it is Basilius Besler's “Hortus Eystettensis“ from 1712 (estimate: EUR 85,000) which is particularly fascinating, for it is a rare trial proof of the jubilee edition of the magnificent botanical work, which had been planned for the following year 1713 and was eventually realized in 1750. Further highlights in the botanical section are a number of herbal books, for instance the third Latin edition of the “Hortus sanitatis“, which will be offered with attractive estimates. While the presumably most important medieval work on natural history will be called up with an estimate of EUR 20,000, the book “De historia stirpium“ by Leonard Fuchs could perhaps be available for EUR 18,000. Images from the first edition of the famous Renaissance herbal book with 512 hand-colored full-page woodcuts of plants are used even today for the illustration of scientific works. Also Johann Christian Volckamer's first edition of the famous monography on citrus fruits “Nürnbergische Hesperides“, estimated at EUR 10,000, is guaranteed to make for excitement in the auction room.In the section of travel literature it is Francois Auguste Péron's “Voyage de découvertes aux Terres australes“ that is particularly worthwhile mentioning. The rare first edition of the travelog in three volumes by the natural scientist, who participated in the French South Sea expedition under Baudin as a zoologist, has been estimated at EUR 12,000. The section of autographs offers Ludwig Wittgenstein's corrections of Ludwig Hänsel's “Wertgefühl und Wert“ (estimate: EUR 7,500), annotated with numerous critical notes, as well as a signed postcard by Franz Kafka from a vacation in Paris together with his later estate administrator Max Brod, in which Kafka sends “Kind regards“ to some mademoiselle Misek in Prague. The estimate is at EUR 8,000.The range of offerings is completed by the collection of sermons “Sermones de sanctis“ by Evrardus de Valle Scholarum (estimate: EUR 16,000) and the “Sermones dormi secure“ by Johannes da Verdena (estimate: EUR 15,000), as well as by Johann Baptist Homann's map series from 1725. His “Grosser Atlas uber die gantze Welt“ will be called up with an estimate of EUR 25,000.Next to rare books, manuscripts, autographs and decorative prints, the auction offers Maritime and Northern German Art. While the latter offers works by, among others, Erich Kubierschky (“Rinkenis an der Flensburger Förde“, estimate: EUR 2,800) and Klaus Fußmann (“Landschaft mit Bäumen“, estimate: EUR 2,600), the section of Maritime Art comprises Claus Bergen's “Die Deutsche Hochseeflotte vor der Skagerrakschlacht“ (estimate: EUR 4,500) and the “Jacht Alexandrine auf tosender See“ (estimate: EUR 3,500) by an artist from Mecklenburg.Preview Thu/Fri 06/07 November, from 11 am – 5 pm Mon-Fri 10-14 November, from 11 am – 5 pm Sun 16 November, by appointment Holstenwall 5, Hamburg Auction Mon/Tue 17/18 November Rare Books – Manuscripts – Autographs – Decorative Prints as well as Maritime and Northern German Art Holstenwall 5, HamburgSince it was founded in 1954, Ketterer Kunst has been firmly established in the front ranks of auction houses dealing in fine art and rare books, with its headquarters in Munich and a branch in Hamburg. Gallery rooms in Berlin as well as representatives in Heidelberg, Düsseldorf and Modena (Italy) contribute substantially to the company's success. In addition, exhibitions, special theme and charity auctions as well as permanent online auctions on www.ketterer-internet-auction.com are regular events at Ketterer Kunst. Robert Ketterer is auctioneer and owner of Ketterer Kunst.Contact:for press enquiries:Ketterer Kunst Joseph-Wild-Str. 18 81829 Munich GERMANY Michaela Derra M.A. Telefon: +49-(0)89-55244-152 (Fax: -177) E-Mail: m.derra@kettererkunst.de www.kettererkunst.de for the department of Rare Books:Ketterer Kunst Holstenwall 5 20355 Hamburg GERMANY Christoph Calaminus Telefon: +49-(0)40-374961-11, Fax:-66 E-Mail: c.calaminus@kettererkunst.de www.kettererkunst.de

02-05-2019 | IT, New Media & Software
Archiware GmbH
Archiware delivers professional Archive and Backup for 1,000 EUR
Archiware GmbH, manufacturer of the media-focussed data management software suite Archiware P5, now offers the new, affordable P5 Desktop Edition. The new license bundle caters to small teams and single users willing to professionally archive their media. Director and DOP Anton Nelson showcases what the P5 Desktop Edition can do in a beautiful testimonial. Munich, February 4th, 2019 - Keeping media safe is crucial in media production – be it raw
10-30-2013 | IT, New Media & Software
Onlineprinters GmbH
onlineprinters.com invests more than EUR three million in production
New 8-colour offset printing press expands online print shop's capacity Neustadt an der Aisch, Germany – By investing more than EUR three million, Onlineprinters, the internationally operating online print shop, has expanded the production facilities at its German site. Extra offset printing capacity was added in September with the purchase of a new state-of-the-art 8-colour printing press, the Heidelberger Speedmaster XL 106-8P, including a new CTP system for digital printing plate
07-17-2012 | Health & Medicine
Otto Bock HealthCare GmbH
EUR 155,000 for Safe Zones Project
Eichsfeld Festival Attracts 25,000 Music Fans to Downtown Duderstadt "Tonight is going to rock!" It was with these words that initiators Professor Hans Georg Näder and Peter Maffay opened the 2012 Eichsfeld Festival this past Saturday. Around 25,000 music fans followed the invitation to experience top-class live performances in the Marktstraße of Duderstadt that day. Peter Maffay, Ich + Ich and four regional special guests did more than just wow the
01-18-2012 | Business, Economy, Finances, B …
Clariant International Ltd
Clariant successfully issues EUR 500 million Eurobond
Muttenz, January 17, 2012 – Today, Clariant successfully priced an Eurobond transaction of EUR 500 million with a tenor of 5 years, issued by Clariant Finance (Luxembourg) S.A. and guaranteed by Clariant Ltd. The fixed rate notes with a minimum denomination of EUR 100,000 and a final coupon of 5 ⅝ % p.a. are maturing on January 24, 2017. The orderbook was significantly oversubscribed on the back of strong investor demand.
12-10-2011 | IT, New Media & Software
VSHosting
VSCloud – cloud services from 0.78 EUR per day
On 15th of August, at a press conference, the unique cloud project named VSCloud was presented which provides cloud services of IaaS (Infrastructure as a Service) type. After three months, VSCloud can boast with hundreds of active users mainly from the Czech Republic and Slovakia. The leadership of VSCloud foresees that the number of first thousand active users will be surpassed by the end of this year. What are the advantages
02-08-2008 | Energy & Environment
Continuing Education Center der TU Wien
“Die Presse” Scholarship in the amount of EUR 15000
MSc Program Environmental Technology and International Affairs The shortage of environmental resources and the dealing with pollution are challenges which the international society of the 21st century has to face. Climate change, water shortage and air pollution are only some of the problems which have to be solved. The purpose of a sustainable development can be reached only if decision makers dispose of a comprehensive education. The cooperation between the Vienna University
Comments about openPR
Your portal is fast, simple, and easy to use. Others may have more functions but they also demand more editing time, you have to preformat the text in order to achieve a good result etc. I think openPR is really fantastic!
Andreas Knepper, wallmedien AG