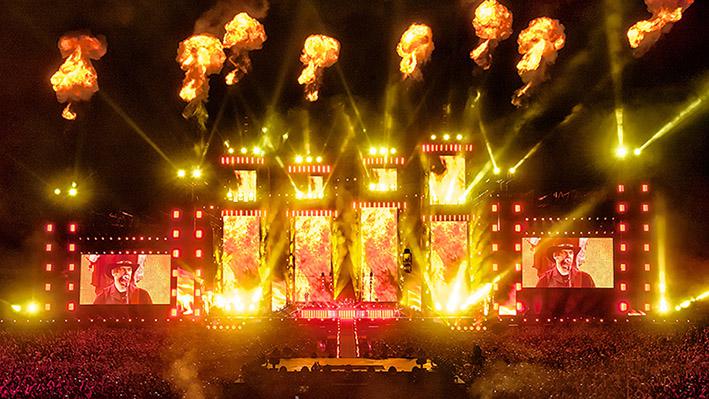 June 2014, Hockenheim – Nothing lasts forever – not even the abstinence of German rock legends the Böhse Onkelz. Fully nine years since their farewell concert, the group were celebrating their revival. On a giant stage in the glaring light of FALCON searchlights supplied by A&O Technology under contract from PRG AG, they were given a frenetic ‘welcome back’ by 200,000 fans.Above the Hockenheimring hung a glowering sky right out of a horror film, and the racecourse was packed with fans. Fans of ‘the Böhsen’ (as they are known). In the middle of the throng rose a stage that resembled nothing so much as a brutal industrial installation. It was supposed to represent the Frankfurt skyline. Giant tours surrounded huge LED screens. On top to the towers, the brilliant searchlights from A&O Technology dominated the scene – ready for action.Once fired up, they transformed the scene into a glowing cauldron of fire. At times it seemed as if hell itself had arisen. Glaring light flooded the Hockenheimring and pillars of fire climbed skyward. And all the time, the pounding beat and the deafening vocal growl of the Onkelz. They were back, and clearly weren’t planning to let the fact escape anyone’s attention. Quiet never was their thing. The FALCONs at the Hockenheimring showed their mettle once again. Open air concerts are certainly their thing. Both concerts were filmed for DVD. Lighting designer Jerry P. Appelt had integrated over forty FALCON BEAM colour 7000W fixtures into the giant set – said to have been the largest ever constructed in Europe. Over half the high-powered FALCON searchlights were in the upper reaches on two levels – cranes had been needed to hoist them into position atop the towers. The rest were stationed on the ground to the side of the main stage or on the towers of the outer wings. The technicians had been obliged to construct the entire set in three shifts (two days and one night). A tight schedule for such an enormous stage. “Thanks to the excellent performance of the FALCONs, combined with their outstanding reliability, we did not have a single service incident in the course of the entire open air event,” reported Jerry P. Appelt, looking back on the weekend of the concerts. “That’s why I’m always happy to rely on FALCON searchlights.”For more information about the company A&O Technology please visit the website www.ao-technology.comAbout A&O Technology For almost twenty years, A&O Technology has been providing regional and international support for even the most demanding projects in the field of architectural or events lighting: from the supply of equipment – whether sale or rental – to the elaboration of creative concepts, to the provision of full-service support in the role of general contractor. The clear division of the company into sales, rental, creative and manufacturing departments guarantees customers communication backed by expertise and efficient solutions at every stage of a project.A large network of tried-and-tested partnerships is available to support your projects.The company’s exclusive distribution portfolio includes the FALCON® range of architectural luminaires and searchlights manufactured by the A&O subsidiary alpha one.A&O Technology has its headquarters in Bremen, Germany, as well as subsidiaries or bureaus in the UAE, USA, Russia and Asia and holds project partnerships worldwide.July 2014 / A&O Lighting Technology GmbH, Arberger Hafendamm 22, 28309 Bremen, Germany, Telephone: +49 (0)421 / 59 66 09-0, Internet www.ao-technology.com, contact: Ljiljana Jurkovic

You can edit or delete your press release Lighting designer Jerry P. Appelt with FALCON searchlights and the Böhse Onkelz live here

11-05-2018 | Health & Medicine
Future Market Insights
GCC Medical Gloves Market Size By 2026 | Paul Hartmann AG, Hotpack Packaging Ind …
The GCC medical gloves market is estimated to increase from US$ 99.5 Mn in 2016 to US$ 240.8 Mn by 2026, registering a CAGR of 9.2% over the forecast period 2016–2026, according to a latest report titled “GCC Medical Gloves Market: Industry Analysis & Opportunity Assessment, 2016-2026” published by Future Market Insights. According to Future Market Insights analysts, an increasing awareness regarding hygiene and health and safety is boosting the growth
08-28-2018 | Advertising, Media Consulting, …
Agrimony Market
Agrimony Market Key Players Emorsgate Seeds, Falcon Russia., Healingherbs Ltd.
Agrimony Market Introduction Agrimony is a genus of 12–15 species of perennial herbaceous flowering plants in the family Rosaceae. Commonly it is known to be a domestic medicinal herb, which is native to the temperate regions of the Northern Hemisphere, with one species also in Africa. The agrimony herb has spikes which bear rows of tiny yellow flowers, known as church steeples. The agrimony is also characterized by having fruits that
02-27-2018 | Business, Economy, Finances, B …
business news
Global Turn Coordinators Market 2018 - EGC, FALCON GAUGE, Century Flight
The statistical surveying information incorporated into the Turn Coordinators report is the aftereffect of significant essential and optional research exercises. The report fragments the global Turn Coordinators market based on makers, item compose, applications, and regions. In this report, each fragment is contemplated completely and measurements are introduced in detail. The report offers an exact outline of the global Turn Coordinators advertise covering key factors, for example, drivers and restrictions
11-21-2017 | Industry, Real Estate & Constr …
business news
Global Contact Grills market 2017 - Westahl, Falcon, Dualit, Livart, Zojirushi
Apex Market Reports, recently published a detailed market research study focused on the "Contact Grills Market" across the global, regional and country level. The report provides 360° analysis of "Contact Grills Market" from view of manufacturers, regions, product types and end industries. The research report analyses and provides the historical data along with current performance of the global Contact Grills industry, and estimates the future trend of Contact Grills market
09-14-2017 | Business, Economy, Finances, B …
market research 2017
Contact Grills Market Analysis 2017-2022 Delonghi, Breville, Westahl, Falcon
Global Contact Grills Market by manufacturers, Types, Segment and Region A market study based on the " Contact Grills Market " across the globe, recently added to the repository of Market Research, is titled ‘Global Contact Grills Market 2017’. The research report analyses the historical as well as present performance of the worldwide Contact Grills industry, and makes predictions on the future status of Contact Grills market on the basis of
08-18-2015 | Business, Economy, Finances, B …
A&O Lighting Technology GmbH
FALCON® BEAM 2 – A&O Technology launches new searchlight
In the new FALCON BEAM 2, A&O Technology is bringing a brilliant new searchlight onto the market. With its extended feature set, the FALCON BEAM 2 is now the first choice for demanding illuminations in the fields of entertainment and architectural lighting. Thanks to a new high-precision parabolic reflector with an ultra-reflective coating, the FALCON BEAM 2 guarantees dazzling brightness. The colour changer is based on the tried-and-tested technology
Comments about openPR
9 o'clock: discuss press release with client, 10 o'clock: submit release to openPR, within the briefest possible time release is published and displayed in a prominent place on openPR.de. I am thrilled!
Zehra Spindler, Calypso Now! - Communication Agency