2014 European Tolerance Award to be handed over in Sofia, Bulgaria 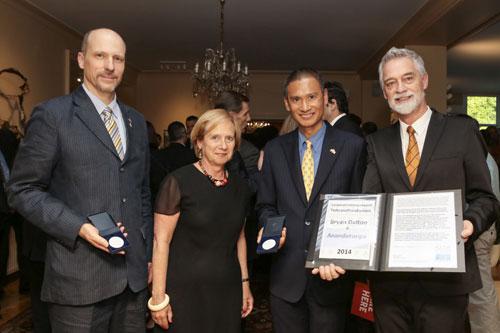 You can edit or delete your press release 2014 European Tolerance Award to be handed over in Sofia, Bulgaria here

10-01-2007 | Arts & Culture
Chris Rabe
2007 Perspectives over the 18th edition of George Enescu International Festival
(by Alexandra Solea/PPS) During the 1st and the 23rd of September, Bucharest was the European capital of music, with the occasion of the 18th edition of “George Enescu” International Festival and Competition 2007. The concerts proposed to the wide public, covered a large stylistic palette beginning with the baroque music until the contemporary tendencies of Romanian and European music. The Festival has reunited the biggest names of the national and international
08-31-2007 | Leisure, Entertainment, Miscel …
Chris Rabe
Budapest Autumn Festival 2007
Sixteen years is a long time. Especially in the life of a contemporary arts festival. This year for the 16th time the Budapest Autumn Festival is bringing together, presenting, staging, exhibiting, putting on public display and showing artists and creations of the most varied genres, turning the spotlight onto today’s arts for ten days in Budapest’s late summer and early winter cultural scene. Organising and financing the BAF is not
08-24-2007 | Politics, Law & Society
Chris Rabe
Mariana Nicolesco, a great voice of our time, brings Europe to Romania
Celebrated soprano Mariana Nicolesco left her native country, Romania, in the 70’s, with a scholarship she won in a national contest to study voice at the Conservatorio Santa Cecilia in Rome. Her superb dark voice, with an enormous extention and her solid musical background - she studied violin from age 6 to 18 - brought her immediately to general attention. Still in the Conservatory, she is the Page in Verdi’s Don