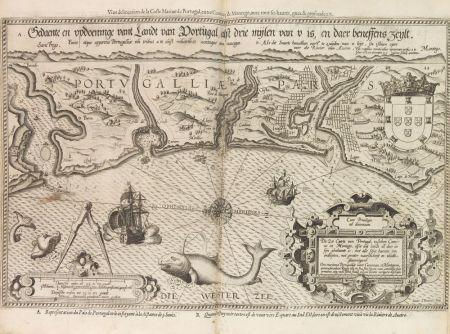 Hamburg, 15 April, 2014 (kk) – It was nothing less but a revolution in the history of nautical cartography – the sea atlas by Lucas Janszoon Waghenaer. The extremely scarce work in first French edition with a Spanish title sheet will be sold in the auction of Rare Books at Ketterer Kunst in Hamburg on 19 and 20 May with an estimate of EUR 85.000. Lucas Janszoon Waghenaer's “Spieghel der Zeevaert“ offers a variety of information, such as an innovative illustration of the coastal line in combination with coast profiles. Additionally, his maps are particularly captivating for their accuracy and their rich artful adornment with ornaments, ships and sea monsters. Besides ships and regattas, Cornelis Haak's rare series of views of Venice from 1762 also show splendid palaces, manors, churches and bridges in the city of lagoons, as well as its masked balls, acrobats and religious processions. The series of vedutas in the style of Canaletto and Marieschi is especially impressive for the two large city maps of Venice published by Pieter van der Aa. The estimate is at EUR 35.000.Next to the first print of the first Latin edition of Abraham Ortelius' “Theatrum Orbis Terrarum“, its style and content paved the path for later atlases, Johann Heinrich Zedler's 64 volume encyclopedia will enter the race with an estimate of EUR 30.000. The monumental lexicon, also called “Der Zedler“ after its publisher, may well hold the claim of being the occident's greatest reference work in print in those days, together with the Spanish “Espasa“. While the French natural scientist Jean Baptiste Audebert entirely dedicated his main work in two volumes “Oiseaux dorés ou à reflets métalliques“ from 1802 to the splendid illustration of humming birds (estimate: EUR 15.000), Frederic Moore and Charles Swinhoe committed themselves to the world of exotic butterflies. The extremely rare book in ten volumes, released over a period of 23 years, comprises all Indian butterflies known of in 1913. The work in an excellent coloring will be called up with an estimate of EUR 25.000. In the section of old prints the “Genealogiea deorum“ by Giovanni Boccaccio is especially worthwhile mentioning. This compendium of mythological records is the first printed geographic lexicon of its kind with a list of mountains, rivers, springs, forests, lakes and seas mentioned in ancient writings. The splendid copy in an old coloring has been estimated at EUR 12.000. This section is contrasted by more modern contemporary documents, such as two autographed letters by Hermann Max Pechstein, each with wash feather drawing. The two writings from June 1927 to his friend and patron, the physician and art collector Dr. Walter Minnich, deliver impressive account of Pechstein's personal circumstances and emotional state. The estimate is at EUR 5.000 each. Some of the 15 further letters by the expressionist artist may perhaps be obtained for estimates starting at EUR 2.000.Along with dedication copies of Pablo Picasso's “The Arts Council of Great Britain 1960“, with signed multicolor original chalk drawing (estimate: EUR 2.000) and Jacques Prévert's “Fêtes“ with eight etchings in colors by Alexander Calder (estimate: 4.000), the range of offerings is completed by Conrad Gesner's “Vogel-, Thier-, Fisch-, Schlangenbuch (estimate: EUR 20.000) as well as a rare copy of Dante Alighieri's “De la volgare eloquenzia“ (estimate: EUR 8.500).Next to Rare Books, Manuscripts, Autographs and Decorative Prints, the auction also offers Maritime and Northern German Art. While the latter comprises works by Erich Hartmann (“Am Flügel (Das Konzert)“, estimate: 5.000) and Jacob Nöbbe (“Blick über die Flensburger Förde“, estimate: EUR 3.500), interesting works by, among others, Johannes Holst (“Hamburger Viermastbark 'Pamir'“, estimate: EUR 6.000) and Adam Marie-Edouard (“Bremer Viermastvollschiff 'H. Bischoff'“, estimate: EUR 5.000) will be called up in the section of Maritime Art.Preview Thu/Fri, 08/09 May, from 11 a m – 5 p m Mon-Fri, 12-16 May, from 11 a m – 5 p m Sun, 18 May, by prior appointment Auction Mon/Tue, 19/20 May at Ketterer Kunst, Holstenwall 5, HamburgSince it was founded in 1954, Ketterer Kunst has been firmly established in the front ranks of auction houses dealing in fine art and rare books, with its headquarters in Munich and a branch in Hamburg. Gallery rooms in Berlin as well as representatives in Heidelberg, Düsseldorf and Modena (Italy) contribute substantially to the company's success. In addition, exhibitions, special theme and charity auctions as well as permanent online auctions on www.ketterer-internet-auctions.com are regular events at Ketterer Kunst. Robert Ketterer is auctioneer and owner of Ketterer Kunst.Contact:for press enquiries: Michaela Derra M.A. Telefon: +49-(0)89-55244-152 (Fax: -177) E-Mail: m.derra@kettererkunst.de for clients: Ketterer Kunst Holstenwall 5 20355 Hamburg Christoph Calaminus Telefon: +49-(0)40-374961-11, Fax:-66 E-Mail: c.calaminus@kettererkunst.de

02-05-2019 | IT, New Media & Software
Archiware GmbH
Archiware delivers professional Archive and Backup for 1,000 EUR
Archiware GmbH, manufacturer of the media-focussed data management software suite Archiware P5, now offers the new, affordable P5 Desktop Edition. The new license bundle caters to small teams and single users willing to professionally archive their media. Director and DOP Anton Nelson showcases what the P5 Desktop Edition can do in a beautiful testimonial. Munich, February 4th, 2019 - Keeping media safe is crucial in media production – be it raw
10-30-2013 | IT, New Media & Software
Onlineprinters GmbH
onlineprinters.com invests more than EUR three million in production
New 8-colour offset printing press expands online print shop's capacity Neustadt an der Aisch, Germany – By investing more than EUR three million, Onlineprinters, the internationally operating online print shop, has expanded the production facilities at its German site. Extra offset printing capacity was added in September with the purchase of a new state-of-the-art 8-colour printing press, the Heidelberger Speedmaster XL 106-8P, including a new CTP system for digital printing plate
07-17-2012 | Health & Medicine
Otto Bock HealthCare GmbH
EUR 155,000 for Safe Zones Project
Eichsfeld Festival Attracts 25,000 Music Fans to Downtown Duderstadt "Tonight is going to rock!" It was with these words that initiators Professor Hans Georg Näder and Peter Maffay opened the 2012 Eichsfeld Festival this past Saturday. Around 25,000 music fans followed the invitation to experience top-class live performances in the Marktstraße of Duderstadt that day. Peter Maffay, Ich + Ich and four regional special guests did more than just wow the
01-18-2012 | Business, Economy, Finances, B …
Clariant International Ltd
Clariant successfully issues EUR 500 million Eurobond
Muttenz, January 17, 2012 – Today, Clariant successfully priced an Eurobond transaction of EUR 500 million with a tenor of 5 years, issued by Clariant Finance (Luxembourg) S.A. and guaranteed by Clariant Ltd. The fixed rate notes with a minimum denomination of EUR 100,000 and a final coupon of 5 ⅝ % p.a. are maturing on January 24, 2017. The orderbook was significantly oversubscribed on the back of strong investor demand.
12-10-2011 | IT, New Media & Software
VSHosting
VSCloud – cloud services from 0.78 EUR per day
On 15th of August, at a press conference, the unique cloud project named VSCloud was presented which provides cloud services of IaaS (Infrastructure as a Service) type. After three months, VSCloud can boast with hundreds of active users mainly from the Czech Republic and Slovakia. The leadership of VSCloud foresees that the number of first thousand active users will be surpassed by the end of this year. What are the advantages
02-08-2008 | Energy & Environment
Continuing Education Center der TU Wien
“Die Presse” Scholarship in the amount of EUR 15000
MSc Program Environmental Technology and International Affairs The shortage of environmental resources and the dealing with pollution are challenges which the international society of the 21st century has to face. Climate change, water shortage and air pollution are only some of the problems which have to be solved. The purpose of a sustainable development can be reached only if decision makers dispose of a comprehensive education. The cooperation between the Vienna University
Comments about openPR
We publish our press releases on openPR.de because we like people who are "open" - just like us.
Frank Obels, CEO, INCONET - Informationssysteme, Communication und Netzwerkberatung GmbH