Call for papers for the Cleanzone Congress 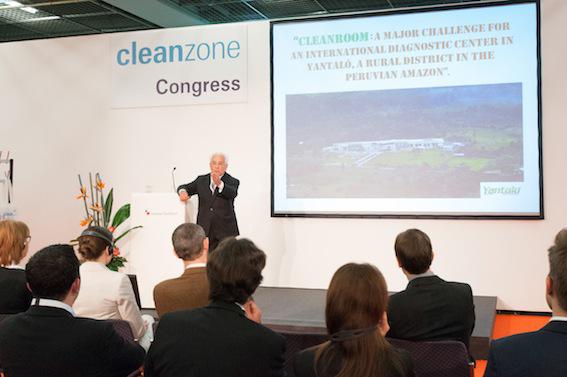 Preparations are under way for the third international Cleanzone Congress: The just-opened call for papers is an invitation for industry experts to submit their propositions for presentations on the areas of focus of the 2014 congress. Contributions are being sought on the latest research findings, innovations, new methods and practical examples, as well as extraordinary projects, provocative theories and visions. This high-calibre knowledge platform will be taking place on 21 and 22 October 2014 at the same time as the Cleanzone trade fair in Hall 1.1 at the Frankfurt exhibition grounds. The call for papers will remain open until 30 April 2014. Speakers can submit their applications at www.cleanzone.frankfurt.com/papers. The content and professional quality of all submissions will be reviewed by an international panel of experts. Its members are as follows: Arnold Brunner (SwissCCS – Swiss Contamination Control Society), Conor Murray (Irish Cleanroom Society), Frank Duvernell (ReinraumAkademie), Gernod Dittel (DRRI – German Cleanroom Institute), Koos Agricola (VCCN – Dutch Society of Contamination Control) and Thomas Wollstein (VDI – Association of German Engineers).Exciting topics – new structure Launched in 2011, the Cleanzone Congress is a venue for international and cross-industry exchange between experts, researchers and users at a professional level. It is aimed at market participants from all industries, disciplines and sectors in which cleanroom technology plays a key role – or where it will be doing so in future. With its clear division into basic and advanced sessions, the congress is able to serve users who are new to cleanroom technology, as well as experienced specialists. “In 2014 we would like to create a programme that is not just varied, informative and inspiring, but also surprising and provocative,” promises Frank Duvernell, Managing Director of ReinraumAkademie (Leipzig), which is responsible for the content of the congress in its role as a partner to Messe Frankfurt. At Cleanzone 2014 it will be possible for the first time to book the congress sessions as individual modules. This makes it possible for participants to target individual subject areas while optimising their trade fair and congress visits. The 2014 Cleanzone Congress sessions are as follows:Cleanroom construction and planning (basic) - Regulations and guidelines - From the production process to the cleanroom concept - Air handling systems / cleanroom technology - Classification Cleanroom construction and planning (advanced) - Future requirements and industries - Modular cleanroom systems - Energy efficiency - New materialsOperation of cleanrooms (basic) - Cleaning and disinfection - Cleanroom clothing - Training cleanroom personnel - Cleanroom monitoring Operation of cleanrooms (advanced) - Innovative decontamination procedures - Future cleanroom clothing and materials - The green cleanroom: energy and material efficiency - Facility managementCleanzone – trade fair and congress Cleanzone – the international trade fair and congress for cleanroom technology – is aimed at all sectors where production, assembly, packaging or work is carried out under cleanroom conditions. The trade fair presents the entire range of what is on offer, from the planning, construction and operation of cleanrooms to consumables and training. The congress taking place at the same time tackles current topics in the cleanroom industry, offering opportunities for interdisciplinary and international exchange at a professional level. Cleanzone is intended for international visitors from all areas of application for life sciences and micro-technology. In 2013 more than 800 participants from 44 countries were brought together with 50 exhibitors and a host of prominent international experts at the Cleanzone trade fair and congress. More information on Cleanzone 2014 can be found at: www.cleanzone.messefrankfurt.comMesse Frankfurt is one of the world’s leading trade show organisers with 543* million euros in sales and 2,026* active employees worldwide. The Messe Frankfurt Group has a global network with 28 subsidiaries and some 50 international sales partners, meaning that it has a presence in more than 150 countries for its customers. Events “made by Messe Frankfurt” take place at more than 30 locations around the globe. In 2013, Messe Frankfurt organised 114* trade fairs, of which more than half took place outside Germany. Comprising an area of 578,000 square metres, Messe Frankfurt’s exhibition grounds are currently home to ten exhibition halls and an adjacent Congress Center. The company is publicly owned, with the City of Frankfurt holding 60 percent and the State of Hesse 40 percent. For more information, please visit our website at: www.messefrankfurt.com. *Preliminary figures (for 2013)i.A. Messe Frankfurt Exhibition Ludwig-Erhard-Anlage 1 60327 Frankfurt Kerstin Männer +49 221 16995930 kerstin.maenner(at)messefrankfurt(dot)com