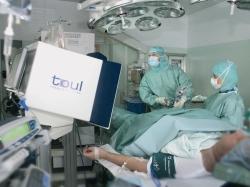 Pacemaker implantation, implantable defibrillators and all other surgical procedures, involves the risk of infection. Infection remains the most common pacemaker-related complication after equipment failure and sensing and pacing defects. It is a significant cause of morbidity and mortality despite improved surgical techniques and the development of new pacemaker devices. If a pacemaker patient gets an infection the bacteria can persist even when the rest of the body is free of infection, causing the original blood poisoning illness to re-emerge at a later date, when it may even prove fatal. The only known solution to such infestation is the complete replacement of the device, which exposes the patient to more risks and costs. Coronary stent infection, although exceedingly rare, represents a life-threatening complication. Toul Laminar Air Flow is reducing the level of contamination of airborne micro organisms significant by protecting the surgical site area as well as the instrument table via an ultraclean laminar airflow. Under normal circumstances, the main source of airborne microbial contaminants is microscopic skin fragments given off by staff in theatre. The contamination level in the operating room increases with the duration of the operation and the number of persons in theatre and hence increasing the risk of postoperative infection. Toul is positioned very close to the operating field and therefore it is possible to reduce the contamination level up to 95 % for the operating field. Toul instrument table maintains the sterility of the instruments independently of the duration of the operation. Significant increases in prevalence of resistance to antibiotics have been observed worldwide. The danger from hospital infections is worsening because, increasingly, they cannot be cured with commonly used antibiotics. Therefore it is more and more important to reduce the contamination level not only in the operating field but especially at the instruments to prevent all sources of contamination during the surgical operation. . An English Study from Whyte has been estimated that almost 70% of bacteria found in the patient‘s wound s come directly or indirectly from the instruments. There is a clearly relationship between the quality of the air and the degree of sepsis encountered. In an conventional operating room you can expect about 50 to 200 CFU/m3. This number is rising the more people are in the operating room and the longer the operation last. Toul instrument table maintains the sterility of the instruments and reduces therefore the risk of an surgical site infection SSI. This instrument table provides a horizontal ultraclean laminar airflow which is directed directly over the instruments, acting as a barrier and minimizing the presence of bacteria-carrying particles at the wound.Application Preventing Coronary artery bypass infection Preventing Defibrillator infection Preventing Pacemaker infection Preventing prosthetic valve infection Preventing coronary stent infection Angioplasty (PTCA)Normeditec Da Vinci 12 39100 Bozen (Italy) Tel +39/348 730 24 45 Fax: +39/0521/37 36 31 http://www.normeditec.comNormeditec want to fight against the more and more resistant bacteria to antibiotic with a mobile laminar airflow: The mobile laminar airflow is an efficient way to fight against hospital infection and the rise of antibiotic resistance

10-11-2018 | Fashion, Lifestyle, Trends
Rockdale Mattress Factory
Mattress Sydney – Tips For Preventing Insomnia
Having insomnia? Sleeping on a quality mattress Sydney will improve your situation a lot. Insomnia is a condition in which you have a problem to fall asleep or after falling asleep, you have difficulty keeping that condition. However, it is not a disease, but a symptom. The concept of a good sleep generally differs from person to person. On average, an adult needs 7-8 hours of night sleep for normal functioning
06-21-2018 | IT, New Media & Software
TMR Research
IT Operations Analytics Market - Preventing Competition 2025
Global IT Operations Analytics Market - Snapshot The global ID operations analytics market is witnessing a hydro, riding on the back of the strength of the offerings of leading vendors. Leading vendors have developed applications and infrastructure which troubleshoot complex problems and provide love management and analysis. Players are also developing applications that support machine learning and provide predictive solution for preventing future problems. Request Sample Copy of the Report @ https://www.tmrresearch.com/sample/sample?flag=B&rep_id=2237 Heather
02-07-2018 | IT, New Media & Software
QyResearchReports
Tips and Techniques for Detecting and Preventing Fraud Market
Qyresearchreports include new market research report “2017-2022 Fraud Detection and Prevention Report on Global and United States Market, Status and Forecast, by Players, Types and Applications” to its huge collection of research reports. The report here amasses trade perspectives having a place with the general Fraud Detection and Prevention market which verbalizes the present-day data and future exposures with reference to the dynamic powers at play. The major players in global and
08-10-2017 | Industry, Real Estate & Constr …
Chemequal
Rodine 85- Preventing Metals from Acid Corrosion
In many industrial operations metals such as steel and iron are subjected to very high temperature which often leaves a discoloring oxide layer or scale on the surface. The process of hot rolling, drawing, annealing and molding of metals result in the deposition of organic impurities, stains, rusts and scale which impede further metal processing. In industries same metals are used for a long period which makes them vulnerable to
05-21-2012 | Industry, Real Estate & Constr …
SGS Consumer Testing Services
Detecting and Preventing Viral Contamination of Food
Foodborne viral outbreaks are ever present in the media spotlight. The European Food Safety Authority (EFSA) reported that viral agents were responsible for 11.9% of the foodborne outbreaks in the European Union (EU) during 2007, coming second only to Salmonella as the most common causation agent group. Undetected food contamination Foodborne viral infections often go undetected and differ from bacterial infections in that, once present in food, viruses will neither alter the
08-01-2011 | Health & Medicine
Pharmacy OneSource
Pharmacy OneSource Announces Free Webinar on Preventing Healthcare-Associated In …
Barriers and Procedures to Eliminate Catheter-Associated Urinary Tract Infections Bellevue, Wash. -- Wolters Kluwer Health announced today that Pharmacy OneSource, software-as-a-service provider of Sentri7, an infection prevention surveillance, documentation and reporting application, is hosting a complimentary webinar with Teal Jeffers, RN, MSN, in “The Goal: Elimination of CAUTI.” Catheter-associated urinary tract infection (CAUTI) is the most frequently occurring type of healthcare-associated infection (HAI) found in the hospital setting. Much attention has been
Comments about openPR
OpenPR ist the nicest and most clearly laid out PR platform I have seen to this day. The press releases are displayed very nicely and clearly and without any unnecessary frills. The updates are fast and the finished release looks appealing and is clearly legible. Even with 16 years of experience one discovers new things from time to time. Congratulations!
Gabriele Ketterl, Director Marketing & PR, Menads