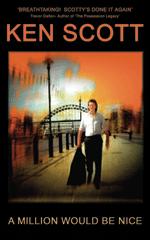 A Million Would Be Nice, the latest novel from Ken Scott, crime and thriller writer from Newcastle, England, is now available. The fast-moving tale tells of the exploits of Donavan Smith, a successful young man who wanted more. But his strange character, perhaps the result of his mother’s religious bigotry and abuse during his childhood, requires him not just to use other people, but to exploit them, ruthlessly. In A Million Would Be Nice, Ken Scott creates the perfect anti-hero, a man you want to hate, but a character whose exploits you want to uncover.Good looks, top job in the city, Ferrari, second and third homes in Paris and Cannes, not to mention a spacious penthouse overlooking the Thames. Yes, it seemed Donavan Smith had it all. And the girls. ready and willing. And if, every now and again, they weren't so willing, Donavan had his own way of persuading them.Jenny McArthur was different though. She knew something terrible had occurred during a ten-hour period of her life that was a total blank. But, as it all gradually came back to her, she relived the horrors encountered at the hands of Donavan Smith. And she wanted to get even. Donavan would have to deal with her.Vicky Mackenzie harboured a secret, a secret that she hadn't disclosed to anyone. So why was she spilling the beans to a total stranger from London, a stranger who she'd only met that night? She told him all about her past life, the cold-blooded murder of her husband, the phoney bank raid and how the money was still out there somewhere. Donavan listened and wondered how he could get his hands on the money; wondered if it was possible to plan a premature retirement.It would get nasty, that was for sure. But why not? Donavan Smith had done nasty before, just ask Jenny McArthur. Donavan Smith and Vicky Mackenzie: two soul mates, two secrets; it was a match made in hell. Author Ken Scott was raised in the Scottish Borders. He moved to that wonderful cosmopolitan metropolis of Newcastle upon Tyne at six years of age to attend the ‘University of Life.’In 2006 he moved to Spain to research his third and fourth novels which he is writing simultaneously. But he still manages to return to Newcastle several times a year. He prides himself on having seen every Newcastle United game live, since moving to Spain, either at St James’s Park, or on UK, Spanish, Scandinavian, African or Arab television.He lives south of Valencia with his wife Hayley, children Emily and Callum and their boxer dog ‘Sir Bobby.’A Million would be Nice is set in Newcastle, London, Paris, Cannes and Spain, all places that Ken Scott knows well. The plot revolves around a bank robbery, and draws on Ken’s own experience as a long time employee of a major British bank.Scotty draws on the raw passion, honesty and genuine characters of the city he loves in every chapter he writes. He has received great acclaim for his first two novels, Jack of Hearts and the sequel A Million Would Be Nice and boasts five star reviews on both Amazon.co.uk and Amazon.com.Full details of the book are available on Ken Scott’s website at http://www.ken-scott.co.uk.Philip Spires Libros International PR Carrer Agro 5 La Nucia Alicante Spain http://www.librosinternational.com http://www.philipspires.co.ukLibros International, the author's publisher, is based in YK and Spain.

You can edit or delete your press release Newcastle crime writer, Ken Scott, published A Million Would Be Nice here

08-19-2008 | Arts & Culture
Libros International
Expatriate British author publishes short stories about life in Spain
Libros International, a publishing company based in the United Kingdom and Spain, is pleased to announce the publication of Poisoned Petals by Andy Crabb. Poisoned Petals is a set of over forty short stories, tales with a Spanish flavour. Most are set in Spain, with many featuring locations and people from within the Costa Blanca, especially around Denia and Javea, where the author lives, works and continually observes. Some are
06-06-2008 | Arts & Culture
Libros International
Libros International publishes Kate Genovese’s book Two Weeks Since My Last Co …
Libros International is pleased to announce the release of Kate Genovese’s book Two Weeks Since My Last Confession, a saga featuring the O’Brien family from Boston, Massachusetts. On the face of things, the O’Briens are an upstanding pillar of the community. John O’Brien is a politician, a senator no less, and a respected and long term incumbent to boot. Marie, Mrs. O’Brien, is a devout Catholic with five children. She
11-30-2007 | Politics, Law & Society
Libros International
God Works For Me Now by Jacqueline Blakeway is published by Libros International
God Works For Me Now by Jacqueline Blakeway is published by Libros International. It’s a book that describes a marriage breakdown and the spiritual responses of the partners involved. God Works For Me Now is Jackie Blakeway’s account of the rapid rise and then slow demise of a relationship. Jackie describes how she fell in love with Jai, the name she attaches to her former husband for the purposes of her
11-30-2007 | Arts & Culture
Libros International
A Bucket of Ashes, a romantic novel by Jill Lanchbery is publised by Libros Inte …
At the heart of A Bucket of Ashes by Jill Lanchbery is an old fashioned love story. Joanna Townsend has it all. She has her own home in a beautiful Sussex village, a successful career as a freelance fashion illustrator, a fourteen year old son who she adores and a gorgeous boyfriend, Tom who wants to marry her. Sally Akinola, mother of four teenage daughters, thinks she has it all too