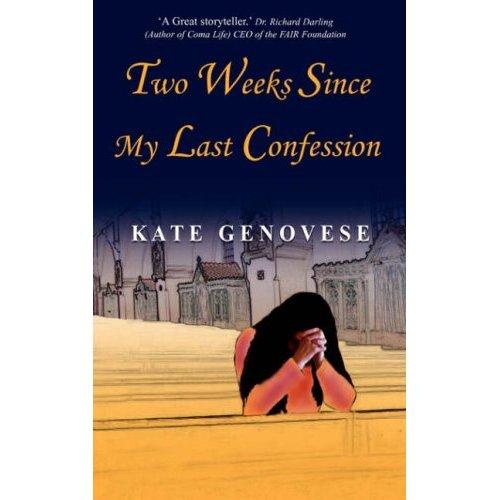 Two Weeks Since My Last Confession by Kate Genovese

Libros International is pleased to announce the release of Kate Genovese’s book Two Weeks Since My Last Confession, a saga featuring the O’Brien family from Boston, Massachusetts. On the face of things, the O’Briens are an upstanding pillar of the community. John O’Brien is a politician, a senator no less, and a respected and long term incumbent to boot. Marie, Mrs. O’Brien, is a devout Catholic with five children. She is determined that they should be raised in such a way that ensures they develop values and respect rules. She fails.The story centres on two O’Brien siblings and sets their stories in parallel, spanning three decades. Molly and Sean are separated by several years, Molly the more obviously impetuous of the two, Sean the less predictable. Things at home turn very sour Molly claims she is sexually abused by her brother. She complains to her mother, who blames her daughter for raising such ideas in the hothouse of her over-active imagination. She tells her father, who seems to be equally dismissive, being always more interested in the preservation of his own privilege and public face. It is only a long time later that she learns her father did, indeed, speak to Sean. They are words that the boy resents, for he has no recollection of having done anything.Essentially, Two Weeks Since My Last Confession deals with the consequences of these reactions which, at the time, were generated for merely rational reasons, their intended consequences designed to heal rather than harm. On the surface a devout Roman Catholic nuclear group, the O’Briens are shot through with tension, hypocrisy, deceit and, indeed, corruption. They are perhaps a fairly standard family beneath the sheen of respect. When the lad misbehaves, his senator father pulls strings to protect him. The senator, himself, is a rampant womanizer and two timer, his clearly unhappy wife thus trapped in a marriage her religion would never contemplate ending. Sean’s life develops before, during and after his tour of duty in Vietnam, but the experience of war changes him. As he matures, he begins to understand the origin of the psychological demons that have haunted him since childhood.But it is Molly, more formally Maureen Bridget whenever her mother scolds her, who provides the centrepiece of the story. Her life deteriorates and affects all around her.In Bobby Angelo, she finds a perfect boyfriend at an age when she is too young to convince others her feelings are sincere. She develops an early, rich, sexual relationship with Bobby, a likeable boy of Italian descent. He is convinced he is destined for stardom as a baseball player and somehow it just doesn’t work out with Molly. In fact, it actually worked out a little too well with Molly, but he is ignorant of this when he goes off to college. Molly thus cannot go to college herself and she takes up a career in health care. She has already smoked dope, Her professional activities facilitate her access to drugs and she begins to try something different, and then a little more, and a little more still. And so she drifts into a destitution of addiction, but she lives an apparently normal life for many years.The book describes the history of the whole family, however, in order to fill out details of the two principal characters’ lives. There are marriages and births, divorces, more births, domestic abuse, success, wealth, failure. There are breakdowns, rehab centres, a Vietnam War and pop culture. And so the characters inhabit a confused two decades to emerge older, wiser perhaps, more stable perhaps.Ultimately, the book is an examination of abuse and its consequences, both direct and incidental. The childhood traumas that centred on Molly and Sean resurface, demand attention, reassert their control of lives. They have been denied. They will not go away. And ultimately the book has a message of hope, as the skeletons in the cupboard are eventually and positively buried. Life can be a messy process, with events confused, subconsciously rejected or unacknowledged. Mistakes are truly easy to make, but unpicking their consequences can be an intricate, delicate and lengthy task.Kate Genovese has written two other published books, Thirty years in September, A Nurses Memoir and Loving Joe Gallucci; Love and Life with Hepatitis C. She is a member of the National Writer’s Union and a registered nurse in the Boston, Massachusetts area.Contact Kate Genovese at www.kategenovese.com or kgeno67176@aol.com.Philip Spires Publicity and Marketing Libros International, Carrer Agro 5, La Nucai, Alicante, Spain http://www.librosinternational.com Philip Spires is Head of Publicity and Marketing for Libros International info@philipspires.co.ukLibros International is a publisher based in Spain and the UK. It is a publisher run by authors for authors. http://www.librosinternational.com

08-19-2008 | Arts & Culture
Libros International
Expatriate British author publishes short stories about life in Spain
Libros International, a publishing company based in the United Kingdom and Spain, is pleased to announce the publication of Poisoned Petals by Andy Crabb. Poisoned Petals is a set of over forty short stories, tales with a Spanish flavour. Most are set in Spain, with many featuring locations and people from within the Costa Blanca, especially around Denia and Javea, where the author lives, works and continually observes. Some are
11-30-2007 | Politics, Law & Society
Libros International
God Works For Me Now by Jacqueline Blakeway is published by Libros International
God Works For Me Now by Jacqueline Blakeway is published by Libros International. It’s a book that describes a marriage breakdown and the spiritual responses of the partners involved. God Works For Me Now is Jackie Blakeway’s account of the rapid rise and then slow demise of a relationship. Jackie describes how she fell in love with Jai, the name she attaches to her former husband for the purposes of her
11-30-2007 | Arts & Culture
Libros International
A Bucket of Ashes, a romantic novel by Jill Lanchbery is publised by Libros Inte …
At the heart of A Bucket of Ashes by Jill Lanchbery is an old fashioned love story. Joanna Townsend has it all. She has her own home in a beautiful Sussex village, a successful career as a freelance fashion illustrator, a fourteen year old son who she adores and a gorgeous boyfriend, Tom who wants to marry her. Sally Akinola, mother of four teenage daughters, thinks she has it all too
09-17-2007 | Arts & Culture
Libros International
Mission, an African novel set in Kenya by Philip Spires is now available
Mission is set in mid-1970s Kenya and is based on Philip’s two years as a volunteer in the country. Five characters, a priest, a politician, a teacher, a school graduate and a retired army officer see a series of events from their own individual perspectives. The central chapter is set thirty years later in London to offer a perspective on how lives change. The novel deals with the concept of

08-30-2022 | Business, Economy, Finances, B …
Worldwide Market Reports
Factors Influencing Global One Time Cleaning Market through 2022 and Beyond Moll …
Worldwide Market Reports added a new research study on One Time Cleaning Market in its repository, which aims to offer a detailed overview of the factors influencing the worldwide business orientation and overall outlook. One Time Cleaning Market study highlights recent market insights with disrupted trends and breakdown of industry offering along with impact due to macro-economic and matured western countries' slowdown. Quantitative statistics with qualitative reasoning are evaluated on
03-03-2022 | Industry, Real Estate & Constr …
ReportsnReports
Marine Lubricants Market Developments, Future Returns Worldwide and Top Key Play …
Download FREE Sample Research Report of Marine Lubricants Market @ https://www.reportsnreports.com/contacts/requestsample.aspx?name=705692 The marine lubricants market size is estimated to be USD 6.2 billion in 2021 and is expected to reach USD 6.7 billion by 2026, at a CAGR of 1.5% during the forecast period. The report provides a comprehensive analysis of company profiles listed below: • BP Plc. (UK) • Chevron Corporation (US) • ExxonMobil Corporation (US) • Royal Dutch Shell Plc (Netherlands) • Total Energies SE(France) • Valvoline(US) • Petronas (Malaysia) • Lukoil (Russia) • Idemitsu Kosan
04-08-2019 | Health & Medicine
Globalmarketers.biz
Developmental Trends in Global Pecans Market 2019 | Molly and Me Pecans, Fisher …
Global Pecans Market Report presents a competitive scenario of key Pecans Industry players with their market share, sales, revenue and growth prospects. The comprehensive information on present and forecast Pecans industry status is presented in the report. The reliable Global Pecans market statistics are provided by segmenting the Global Pecans Industry based on product type, applications and regional presence. The vital factors which are Compound Annual Growth Rate (CAGR) value for
01-03-2019 | Business, Economy, Finances, B …
WISE GUY RESEARCH CONSULTANTS PVT LTD
Pecans Global Market 2018: Key Players – Molly and Me Pecans, Fisher Nuts, Dia …
Pecans Industry Description Wiseguyreports.Com Adds “Pecans -Market Demand, Growth, Opportunities and Analysis Of Top Key Player Forecast To 2024” To Its Research Database The global Pecans market will reach xxx Million USD in 2018 and CAGR xx% 2018-2023. The report begins from overview of Industry Chain structure, and describes industry environment, then analyses market size and forecast of Pecans by product, region and application, in addition, this report introduces market competition situation among
07-25-2018 | Industry, Real Estate & Constr …
QY Research Groups
Pecans Market Research Report 2018: Key Players- Molly and Me Pecans, Fisher Nut …
The report Pecans Market by Manufacturers highlights the essential market dynamics of Pecans sector. The efficiency of this segment has been studied deeply along with the noteworthy challenges and forthcoming growth opportunities and prospective. The report focuses in decision making abilities and supports to make effective counter strategies in order to achieve competitive advantage. Current market scenario of the segment and forecasts of the market situation have also been bounded
01-23-2017 | Advertising, Media Consulting, …
Archer Communications, Inc.
Molly Stark Joins Archer Communications as a Marketing Communications Intern
Rochester, NY, January 19, 2017 - Archer Communications Inc., a marketing firm located in Rochester, NY is pleased to announce that Molly Stark has joined the team as a marketing communications intern. “We are are excited to have Molly join us for the spring semester,” said Carrie Tschetter, president of Archer Communications. “Her experience with social media strategy and ‘go-getter’ attitude will make her a great addition to our team.” This
Comments about openPR
I can't but agree to the positive statements about your portal: easy to use, clear layout, very good search function, and quick editing!
Jens O'Brien, Borgmeier Media Communication