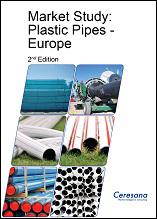 Pipes made of plastics are becoming more popular in all sectors. They have important advantages compared to those made from other materials such as aluminum, concrete, cast iron, copper, and steel. Due to their low weight, their resistance to corrosive effects and chemicals as well as the simple handling, e.g. trenchless installation, their importance in all application areas increases. The market research institute Ceresana expects revenues generated with plastic pipes in Europe to amount to approx. €12.7 billion in 2020.The Advantage of VersatilityThanks to their propitious properties, there are virtually no segments where plastic pipes do not offer a real alternative. The degree of importance different applications areas have for individual types of pipes varies considerably. For example, pipes made of polyvinyl chloride (PVC) are relatively cheap and are thus used extensively in the sewage, potable water and cable protection sectors. While pipes based on polypropylene and polyethylene are still in the process of challenging the dominance of PVC-pipes in potable water supply, they are already playing a notable part in both gas supply and in industrial applications. During the upcoming years, the utilization of other plastics, such as polybutylene, polyamide and acrylonitrile-butadiene-styrene, is likely to become more and more widespread. "We expect demand to increase by, on average, 2.7% p.a. during the next eight years. Among others, these pipes are used for specialty applications such as ceiling cooling, compressed air systems, heating installations as well as the construction of automobiles and naval vessels and other industrial processes", explains Oliver Kutsch, CEO of Ceresana. The utilization of composite pipes, for instance PE-X and aluminum, offers the chance to optimize specific properties of pipes.Substitution Effects Ameliorate the Effects of the Crisis in ConstructionThe most important sales market for plastic pipes is Germany that accounted for 13.5% of total European consumption in 2012. Russia ranked second, followed by Turkey, France, and Italy. In the past, many Eastern European countries were able to profit from the highly dynamic development of many important sales markets for plastic pipes. Currently, however, the construction sector in many European countries is suffering from a crisis. Plastic pipes are able to profit from substitution effects nonetheless, at the expense of other materials. For example, pipes made from metal or concrete are replaced by plastic, as this material offers superior properties and processing options. In addition, the rising price of raw materials, like steel or copper, plays an essential role in the substitution process. Regional Differences Within EuropeOn the relatively saturated markets in Western Europe, demand for high-quality pipes made of polyethylene and polypropylene in particular is increasing, while the demand for PVC pipes is expected to develop at only very modest rates. Growth rates recorded on the market for plastic pipes during the boom of the construction sector prior to the economic crisis will not be reached again in Western European countries. The situation, however, varies widely when examining individual European countries. While a rather positive development is expected for Denmark, Germany or Switzerland, a number of southern European countries such as Greece or Spain are unlikely to recover in the near future. Eastern European demand for PVC pipes is likely to increase at rather high growth rates in comparison to Western Europe. According to analysts at Ceresana, the backlog demand in expanding the sewage and potable water supply in particular will cause demand for plastic pipes to increase at higher growth rates. Russia and Turkey especially will be important growth markets. The Study in Brief:Chapter 1 lists development of revenues generated with plastic pipes in 30 European countries, both in Euro and US-dollars. It also provides data regarding production and demand in individual countries, split by the materials polyethylene (PE), polypropylene (PP), polyvinyl chloride (PVC), and other plastics (in tonnage). Demand in the eight largest countries (Germany, Russia, Turkey, France, Italy, Poland, the United Kingdom, and Spain) is analyzed in detail split by the applications Sewage, Potable Water, Cable Protection, Gas, Agriculture, Industry, and Other Applications. Chapter 2: this chapter analyzes the development on individual sales markets for plastic pipes: Data of demand develop within seven applications split by the largest European markets is provided. Chapter 3 contains data regarding demand for various materials, e.g. PE, PP, PVC, and pipes made from other plastics, split by 30 European countries. All data in the chapters 1 to 3 are given for the period spanning 2004 to 2020. Chapter 4 provides profiles of the largest manufacturers of plastic caps and closures, clearly arranged according to contact details, turnover, profit, product range, production sites, profile summary, products, and applications. Extensive profiles are provided for 65 manufacturers, including Agru Kunststofftechnik, Aliaxis, Fränkische Rohrwerke, Georg Fischer, KWH Pipe, Pipelife, Polypipe, Polyplastic Group, Rehau, Simona, Tessenderlo Group, Uponor, Uralita & Wavin.www.ceresana.com/en/Market-Studies/Industry/Plastic-Pipes-EuropeCeresana is a leading international market research and consultancy company for the industrial sector and operates branch offices in Constance, Vienna and Hong Kong. For more than 10 years, it has been supplying several thousand customers from 55 countries with up-to-date market intelligence. Extensive market knowledge creates new prospects for strategic and operational decisions. Ceresana’s clients profit from practical consulting services, tailor-made single-client studies and more than 60 independent multi-client market studies. The Ceresana business analysts are specialists in markets chemicals, plastics, additives, commodities, industrial components, packaging, and construction materials.Ceresana Technologiezentrum Blarerstr. 56 78462 Constance Germany Tel.: +49 7531 94293 10 Fax: +49 7531 94293 27 Public Relations: Martin Ebner, m.ebner@ceresana.com

You can edit or delete your press release Plastic Pipes Still Winning: Ceresana Publishes 2nd Edition of the Most Comprehensive Study on the European Market here

05-27-2020 | Industry, Real Estate & Constr …
CERESANA
Flexible and robust: new Ceresana study about the global market for polyethylene …
Linear low-density polyethylene (LLDPE) is one of the most widely used types of standard plastics. Other varieties of polyethylene, especially LDPE and HDPE, are sometimes easier to process; however, LLDPE is more flexible and has a higher resistance against tearing, shocks, and punctures. These special properties are the result of the manufacturing process: copolymerization with alkenes at low temperatures and low pressure results in polymer chains with short branches only.
02-14-2020 | Industry, Real Estate & Constr …
CERESANA
Green boom: Ceresana forecasts further growth for bioplastics
Polylactic acids, starch blends, cellulose, and other bioplastics achieve significantly higher growth rates than conventional standard plastics made of mineral oils or natural gases. ,,Bioplastics can be used in a growing number of application areas," explains Oliver Kutsch, CEO of market research institute Ceresana. With its newest study, Ceresana has examined the world market for "green" polymers for the fifth time already. Analysts predict their future development to remain dynamic:
07-12-2019 | Industry, Real Estate & Constr …
CERESANA
Established Classic: Ceresana Presents Fifth Report on the Global Market for Pol …
Polypropylene is one of the world's most widely produced standard plastics, second only to polyethylene. “Polypropylene can be processed using various techniques and is used for the most diverse applications ranging from packaging to household appliances, clothing, and vehicles,” Oliver Kutsch, CEO of Ceresana, explains. The market research company analyzed the global market for polypropylene already for the fifth time. The latest report expects revenues for this type of plastic
07-11-2019 | Industry, Real Estate & Constr …
CERESANA
Green Dynamics: New Ceresana Report on the Global Printing Inks Market
Digital printing and digitization of media: The market for printing inks is affected by disruptive changes but also offers new opportunities. “Even in countries where the total demand for printing inks is stagnating or declining, there are certain growth segments,” reports Oliver Kutsch, CEO of Ceresana. The market research company already examined the global printing inks market for the third time: the different application areas and printing processes as well

09-18-2018 | Health & Medicine
Euroscicon Ltd.
Euro Ophthalmology 2019
The 2nd European Congress on Ophthalmology going to be held amid March 21-22, 2018 at Amsterdam, The Netherlands, which unites a one of a kind and worldwide blend of substantial and medium pharmaceutical, biotech and symptomatic or diagnostic organizations, leading universities and clinical research companies making the meeting an ideal stage to share understanding, encourage coordinated efforts crosswise over industry and the scholarly community, and assess rising advancements over the
03-19-2018 | Health & Medicine
Conference Series LLC LTD
Euro Surgical Pathology 2018
Rome, Italy welcomes you all to share Medical Knowledge and Experience at our upcoming "14th International Conference on Surgical Pathology and Cancer Diagnosis, May 17-18, 2018. Some of the main sessions "to-be-covered" are • Surgical Pathology and Diagnosis • Cancer Pathology • Breast Pathology • Gynecologic Pathology • Gastrointestinal and Liver Pathology • Neuro Surgery and Pathology • Oral and Maxillofacial Pathology • Dermatopathology • Genitourinary Pathology • Cytopathology & many more! Holiday Inn Rome - Aurelia Via Aurelia Km 8,400 00163 Roma Italy
01-13-2017 | Health & Medicine
ConferenceseriesLLC
20th Euro Congress on Psychiatrists and Psychologists
Theme: Achieving mental wellness by understanding human mind through Psychiatric approaches Description: Euro Psychiatrists 2017 (CME Accredited Event) will provide an opportunity for all stakeholders working on mental health issues to talk about their work. Euro Psychiatrists 2017 will congregate renowned speakers, principal investigators, experts, psychiatrist and researchers from both academia and health care industry will join together to discuss their views and research. Conference highlights 1. Psychiatry 2. Psychology 3. Child and Adolescent Psychology 4. Psychosis And Adverse
01-02-2017 | Health & Medicine
Euro Biotechnology
17th Euro Biotechnology Congress
Conference Series LLC extends its warm welcome to 17th Euro Biotechnology Congress during September 25-27, 2017 at Berlin, Germany with a theme “Novel Trends and Innovations in Biotechnology for Making Life Better”. Conference Series LLC through its Open Access Initiative is committed to make genuine and reliable contributions to the scientific community. Scope and Importance Euro Biotechnology Conference aims to bring together the Professors, Researchers, scientists, business giants, and technocrats to provide
06-30-2016 | Industry, Real Estate & Constr …
Euro Facade Tech
Euro Façade Tech Glazing Systems
Virtually any type of glazing system can be used with structural glass facades. Check out the options with Euro Façade Tech. FRAMED Framed systems support the glass continuously along two or four sides. There are many variations of framed systems, most of which fall into two general categories. Conventional unitized curtainwall systems are seldom used with structural glass facades. STICK Stick-built glass facades are a method of curtainwall construction where much of the fabrication
05-18-2016 | Tourism, Cars, Traffic
Traveltext Ltd
Traveltext's alternative Euro 2016
You don’t even have to be a sports fan to know that this summer, the England football team will be heading off to the latest major international tournament with the hopes of a nation resting on the shoulders of the likes of Wayne Rooney, Jamie Vardy and Dele Alli. The fact that the tournament has expanded this year to include no fewer than 24 nations means that the eyes of Europe
Comments about openPR
I can't but agree to the positive statements about your portal: easy to use, clear layout, very good search function, and quick editing!
Jens O'Brien, Borgmeier Media Communication