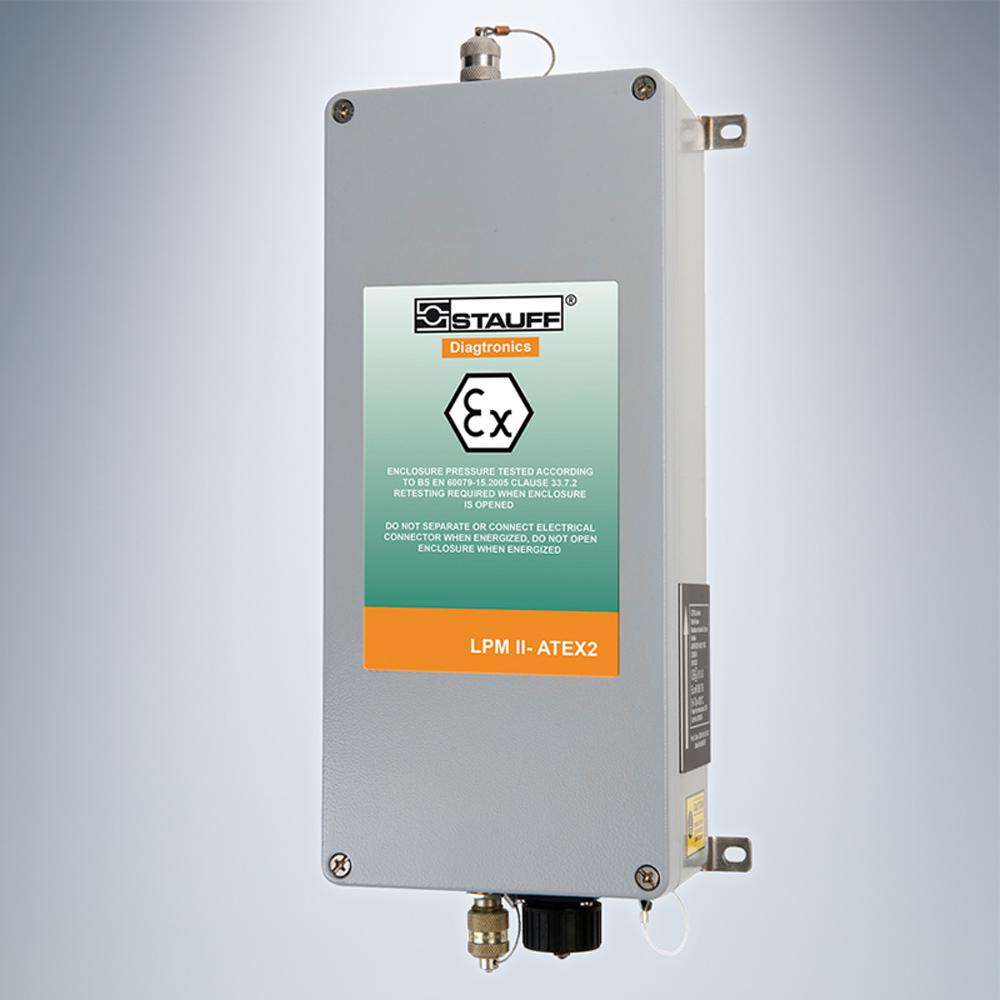 In addition to the LasPaC II-I („Inline“) Laser Particle Counter that was launched earlier in 2013, Stauff is now presenting the LPM-II Particle Monitor, another ATEX2 approved measuring device for permanent installation in areas prone to explosion (zone 2 / category 3G) according to EU directive 94/9/EG. This classification was realised through a modified design of the housing and connectors. Hence, the unit meets all the requirements for use in the oil and gas industry or in chemical and process technology. Both particle counters enable the operators of hydraulic and lubrication systems to immediately respond to increasing contamination in the fluid, to reduce downtime of the system, and to protect it against costly failures.While both measuring devices determine the exact degree of contamination of mineral based fluids, diesel and petroleum as well as the classification in 8 channels between 4 μm(c) and 70 μm(c) according to ISO 4406:1999 and other international standards, the LPM-II Particle Monitor in particular in characterized by its compact design and the ability to be connected with existing machine systems by using the CAN-Bus interface.Units that are compatible with Phosphate Ester (e.g. Skydrol®), Water Glycol and other types of aggressive media are available on request, just like coarse pre-filters to protect the devices, water-in-oil and temperature sensors.Background InformationWalter Stauffenberg GmbH & Co. KG was founded in the 1950s in Werdohl, in the German province of North Rhine-Westphalia, and was initially a contract turning shop. Today the company operates under the trade name STAUFF, developing, producing and marketing fluid technology components for use in plant construction and mechanical engineering. In the fields of tube, pipe and hose clamps, measuring technology and hydraulic filtration, STAUFF is one of the world’s leading organisations in a growing industrial segment.Meanwhile, more than 1200 employees (12/2012) in 18 companies generate an annual turnover of more than EUR 190 million (12/2012) worldwide. Additional distribution subsidiaries have recently been opened in Ireland, Malaysia and Vietnam. Besides the group headquarters in Werdohl Ehrenfeld, the company has production and logistics facilities in the German cities of Plettenberg-Ohle and Neuenrade-Küntrop.Walter Stauffenberg GmbH & Co. KG Im Ehrenfeld 4 58791 WerdohlPress Contact Mr Boris Mette Marketing Communications Tel.: +49 (0) 2392 / 916 154 Fax: +49 (0) 2392 / 916 270 154 E-Mail: b.mette@stauff.com

News-ID: 274961 • Views: 3354
Comments about openPR
We publish our press releases on openPR.de because we like people who are "open" - just like us.
Frank Obels, CEO, INCONET - Informationssysteme, Communication und Netzwerkberatung GmbH