Being part of a submarine battle on a mobile 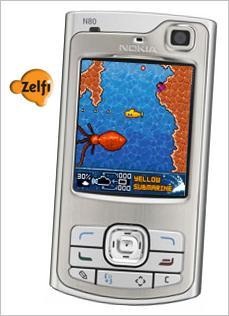 Yellow Submarine is a new mobile phone game developed by Inlogic Software and casts a spell over the player with missions and sea-adventures in an underwater operation.The player fills the role of the lieutenant commander of a submarine and must accomplish different missions with its crew. The sea is enclosed from risky straits and is abound with hostile ships, which must be destroyed mines, torpedoes or bombs. The advantage of the submarine is to operate hidden and to be located only with difficulty. The boat advance more and more into unknown sea depths and meets dangerous sea monsters, who become fast a component of a mission.Yellow Submarine is a good Action Shooter for submarine fan. The exciting mobile game demands good reactions to play and sensitivity to control the submarine. The mobile game is available for euro 2.99 at http://www.zelfi.com/en/mobile-games/games/yellow-submarine/.Zelfi AG CEO: Andreas Berg Hechtsheimer Str. 33 D-55131 Mainz Germany Telefon: +49 6131-9064850 Telefax: +49 6131-9064853 info@zelfi.com www.zelfi.comAbout Zelfi The Zelfi public limited company is a start-up located in Mainz/Germany being actively involved in the fields of Mobile Marketing and Mobile Entertainment by providing software products. The development and the service of a Mobile Marketing platform is our core business. This innovative technology-platform forms a nodal point of mobile phone users, mobile phone software developers and advertisers. The Zelfi newsletter provides current information about new mobile games. Subscribe to Zelfi newsletter at www.zelfi.com/en/newsletter/.

05-24-2019 | Media & Telecommunications
Bharat Book Bureau
Asia - Mobile Infrastructure and Mobile Broadband
Bharat Book Bureau Provides the Trending Market Research Report on "Asia - Mobile Infrastructure and Mobile Broadband" under Telecom category. The report offers a collection of superior market research, market analysis, competitive intelligence and industry reports. Executive Summary Leading Asian nations prepare for 5G rollouts Asia’s mobile subscriber market is now witnessing moderate growth in a fast maturing market. Whilst there are still developing markets continuing to grow their mobile subscriber base at
06-11-2018 | IT, New Media & Software
qyreports
Mobile Safety Software
The rising popularity of mobile applications is one of the key factors responsible for the strong growth of this market during the forecast period of 2017 to 2021. It has been noted that mobile apps, such as WhatsApp, Snapchat, Facebook, YouTube, and Gmail, have gained popularity among the millennials since the past few years. Business applications, such as e-mail, calendars, and teleconferencing applications, are available for free and offer an
06-07-2018 | IT, New Media & Software
Logicspice
Mobile App Developemt Company
Logicspice has recently launched online food ordering system to make the ordering and delivery process easiest for restaurants. We can say that this is the next generation for restaurant. This food ordering system is providing mobile apps for restaurant, customers, kitchen staff and delivery persons. You can integrate this system with your existing customer website also. With the growing demand of online food delivery, this is the next big thing for
12-15-2016 | Media & Telecommunications
Telecommunication Market
Asia - Mobile Infrastructure And Mobile Broadband
Asian mobile broadband market continues to grow strongly With 3.9 billion mobile subscribers and over 50% of the mobile subscribers in the world, spread across a diverse range of markets, the region is already rapidly advancing in the adoption of mobile broadband services. Mobile broadband as a proportion of the total Asian mobile broadband subscriber base, has increased from 2% in 2008 to 18% in 2013, 27% in 2014, 33% in
03-06-2014 | Business, Economy, Finances, B …
ystats.com Gmbh & Co. KG
Mobile gaming increases worldwide
A new publication by Hamburg-based secondary research organization yStats.com, “Global Mobile Gaming Market 2014”, reports that gamers are moving away from consoles and pre-installed PC games toward games on mobile devices such as smartphones and tablets. Mobile games are the fastest growing segment of the video game market as game-playing on mobile devices has become a major activity of Internet users worldwide, slightly ahead of online gaming on PC. Game-playing
01-24-2013 | IT, New Media & Software
Steema Software
Mobile Charting components for BlackBerry mobile platform
Girona, Catalonia, Spain – January, 2013 - Steema Software, a leading vendor of development components for web, desktop and mobile applications, announced the availability of its TeeChart Charting Library for BlackBerry mobile devices. This is the company’ first release in 2013 and with it, Steema Software extends their offering of mobile charting components to BlackBerry Mobile platform alongside current Windows Phone 7, Android and iPhone/iPad support. The BlackBerry Chart library is
Comments about openPR
We publish our press releases on openPR.de because we like people who are "open" - just like us.
Frank Obels, CEO, INCONET - Informationssysteme, Communication und Netzwerkberatung GmbH