Mini Drone Made in Germany 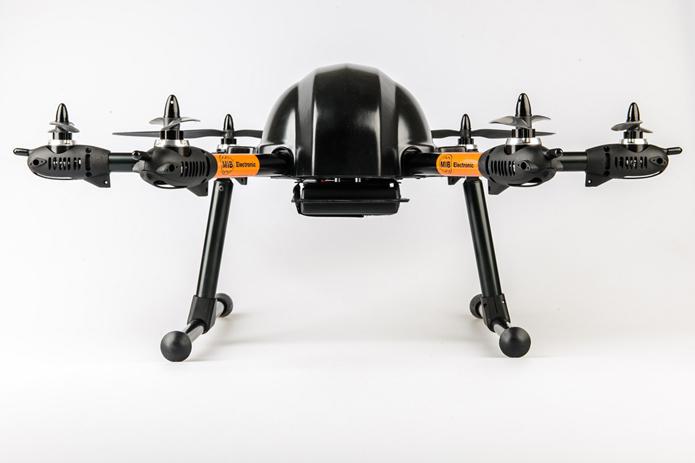 Mini Drone Made in Germany

Laichingen/Germany, 21st October 2013 - At the Milipol fair, in November 2013, in Paris, the South German manufacturer MIB Electronic will present its newly developed mini drones. The drones are manufactured in Germany and will be presented for the first time to an professional audience.The high-quality multicopters serve as an observation platform and are controlled wireless from a ground station. Furthermore the system offers the possibility to carry out completely autonomous missions. The operating distance of the mini drones is several kilometres. Integrated IR cameras transmit images in real time to the ground station, even in bad weather conditions or at night. Additionally, a miniature HD video recorder records the images which may be readout after the drone has landed. For safety reasons the drone is operated by two people, the pilot and an assistant, controlling the cameras and evaluating the images. Thanks to the robust but still very light construction, the flight time of the system exceeds that of systems already available on the market.MIB Electronic GmbH Markus C. Kneher (managing director) Adlerstr. 23 89150 Laichingen Germany Phone: +49 7333 92 31 91 Fax.: +49 7333 92 42 20 Mail: office@mib-electronic.com Web: www.mib-electronic.comMIB Electronic GmbH develops highly specialised electronics for the army, the defence industry, authorities, service providers and the industry in the field of “internal security“, so-called security solutions. To date, MIB has mainly developed special products designed according to customers' specifications which are manufactured at its proprietary production site.

07-08-2010 | Media & Telecommunications
MIB ELECTRONIC GMBH
Laser Microphone for audio-visual area monitoring
MIB ELECTRONIC, a Southern German manufacturer presented beginning of May 2010 at the GPEC in Leipzig a redevelopment of audio-visual area monitoring to professional audiences. The so called Laser Surveillance System is able to scan and detect conversations held in one room over the window glass by using a hidden laser beam which is placed outside, hence the observed building does not have to be entered. In recent years the manufacturer