During a $100 Million Hospital Merger, Kerry Heimrich, President and CEO of Adventist Health, stated that they Welcome LGBTQ Employees and that they have no Church Directive on Reproductive Rights 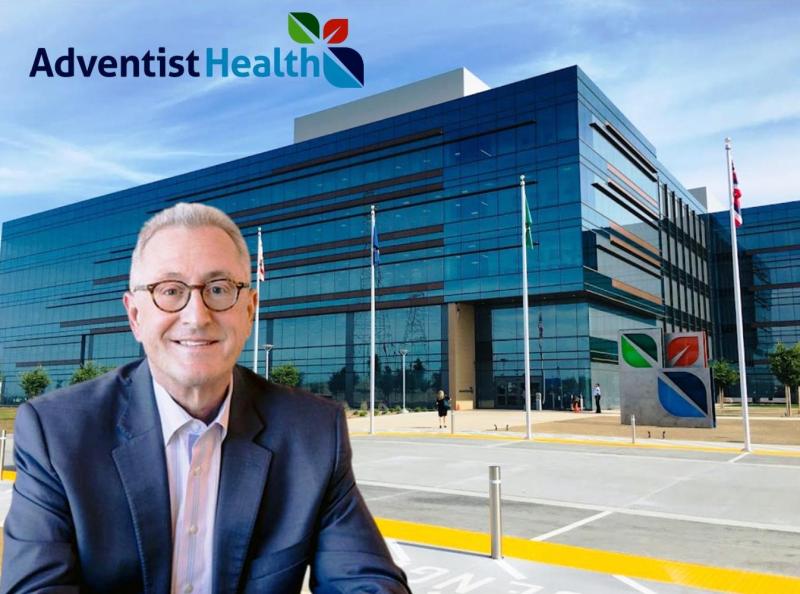 On August 11, 2022, Mid-Columbia Medical Center (MCMC) located in Oregon and Adventist Health announced the intent for MCMC to join Adventist Health. As part of this agreement, Adventist Health, a church-owned health care system operating in California, Oregon, Washington, and Hawaii, will pay $100 million to MCMC. Kerry Heimrich, the new President and CEO of Adventist Health and the former CEO of Adventist-owned Loma Linda University Medical Center, Children's Hospital, and Behavioral Medicine Center, stated the following in a press release:• "We welcome employees from all backgrounds, including the LGBTQ community," he added. • Adventist Health has no church directive regarding reproductive rights, he said. "Decisions on reproductive rights are a discussion between a woman and her physician." Here we have the President and CEO of Adventist Health expressing that there are no church directives on reproductive rights that govern their hospitals, and that these discussions should take place between a woman and her physician. These are the same arguments advanced by pro-abortion, pro-choice, and pro-death activists. So, no church directive exists to guide Seventh-day Adventist hospitals on the issue of "reproductive rights." How about "Thou shalt not kill"? That is much more than just a directive. It is the law (Exodus 20:13).What about the Seventh-day Adventist Church's new and improved stance on abortion? Well, apparently, all of the effort and time spent developing that new position on abortion means absolutely nothing to our health-care institutions because it is not recognized as a directive. Our hospitals operate as if there is no church doctrine, policy, or directive against murder.Adventist Health's President and CEO, Kerry Heimrich, was not the only one defending the pro-abortion and pro-choice position. Another Adventist Health administrator also publicly affirmed the pro-choice view in this same press release about the new hospital merger in Oregon. Joyce Newmyer, president of the Oregon Network Adventist Health and chief people officer, expressed the same sentiments about Adventist Health's policy on reproductive rights:• Newmyer added that "as a woman, and an Adventist Health employee, I'm very proud of our position on reproductive rights, which leaves women in charge of their own bodies." Top church officials are telling the public that Adventists promote the "My Body, My Choice" propaganda. Again, these are the same arguments advanced by those who support and promote abortion. They are championing bodily autonomy. They want abortion rights because they believe they have a right to control what happens to their bodies.The main flaw in that argument is that it fails to recognize that one's rights end where the next person's rights begin. We must accept the fact that every human being has the right to life. And when your rights begin to infringe on the rights of others, we must draw the line.It is a lie and a myth to assert that "My Body, My Choice" is a right to abortion. If it were truly your body, you would be the one killed during an abortion. But it isn't you who dies; it is an innocent baby who is murdered. And whether you, your doctor, or these spineless hospital or church administrators believe it or not, murder is morally wrong. If something is wrong, and murdering an unborn baby is evil, the issue should not be left up to the doctor, the patient, or anyone else.Click to read the full story: http://adventmessenger.org/during-a-100-million-hospital-merger-kerry-heimrich-president-and-ceo-of-adventist-health-stated-that-they-welcome-lgbtq-employees-and-that-they-have-no-church-directive-on-reproductive-rights/Contact: Andy Roman, Publisher Address: Advent Messenger, PO Box 96, Dover, OK 73734 Phone: (888) 299-2119 Website: www.adventmessenger.org Email: adventmessengers@gmail.comAbout: Advent Messenger provides news and commentary on current events, top stories, social trends and political and religious events. For more news visit www.adventmessenger.org

You can edit or delete your press release During a $100 Million Hospital Merger, Kerry Heimrich, President and CEO of Adventist Health, stated that they Welcome LGBTQ Employees and that they have no Church Directive on Reproductive Rights here

09-30-2022 | Leisure, Entertainment, Miscel …
Advent Messenger
Truth-filled Literature Containing the Three Angels' Messages is Being Blamed on …
LegnanoNews, a Northern Italian news outlet that serves Legano and Milan, published an article titled "Anonymous Manifestos of Religious Fanaticism Invade the Oltresempione in Legnano" on August 21, 2022. Images of the pamphlets distributed and placed in mailboxes at numerous condominiums in Legano, Italy, were included in the story. The literature included Bible verses demonstrating how God's word requires the Sabbath to be observed on Saturday, the seventh day of the
09-30-2022 | Leisure, Entertainment, Miscel …
Advent Messenger
The Adventist Church in Italy and HopeMedia Italy Celebrate the Vatican-inspired …
HopeMedia Italy is the official communication agency for the Italian Union of Seventh-day Adventist Churches. According to an article published on September 14, 2022 by HopeMedia Italy titled "Season of Creation in Cesena," Roman Catholics, Romanian Greek-Catholics, Ukrainian Greek-Catholics, Romanian Orthodox, and Seventh-day Adventists celebrated a "ecumenical event" on the theme "Listen to the Voice of Creation." This celebration was held in response to the global call by Pope Francis,
09-07-2022 | Advertising, Media Consulting, …
Advent Messenger
AdventHealth will Sponsor an All-Star Football Game that is Scheduled to be Play …
AdventHealth has officially agreed to be the "Title Sponsor" of the Cure All-Star Football Game, which will feature the greatest high school football players from Lake and Osceola Counties in Florida. The all-star game is set to take place on Friday night, December 9, 2022. How can we teach people about the sanctity of the Sabbath when we sign up to sponsor football games that violate its sacred hours? How
09-07-2022 | Leisure, Entertainment, Miscel …
Advent Messenger
The Orlando Magic and AdventHealth have Joined Forces to Build a new 130,000-squ …
AdventHealth, a major Seventh-day Adventist non-profit healthcare system, is partnering with the world to fulfill a new mission. They recently completed a 130,000 square foot, $70 million building project in the sports and entertainment industries. On August 31, 2022, Spectrum News (Channel 13) in Orlando, FL reported the following: • "The Orlando Magic and AdventHealth have opened the $70 million AdventHealth Training Center in downtown Orlando, a state-of-the-art facility that will

06-23-2022 | Leisure, Entertainment, Miscel …
Advent Messenger
HopeMedia: "The Adventist Church in Solidarity with the Ukrainian Catholic Churc …
Hope Media is the official news agency of the Seventh-day Adventist Church in Italy. A March 15, 2022 headline from HopeMedia reads: "The Adventist Church in Solidarity with the Ukrainian Catholic Church." To stand in solidarity with someone, as in the case of Catholicism, means to be in "unity or agreement of feeling or action, especially among individuals with a common interest." One can certainly express regret for the suffering
11-30-2021 | Leisure, Entertainment, Miscel …
Advent Messenger
Penang Adventist Hospital Wishes you a Happy Deepavali
The celebration of Deepavali is associated with Lord Krishna, a major Hindu god. During the Deepavali festival, which usually lasts about 5 days, worshipers commemorate Lord Krishna’s victory over the cruel demon known as Narakasura. It is said that this demon oppressed the people until the people prayed to Krishna, who responded by killing Narakasura during a battle. Therefore, Deepavali commemorates Krishna defeating Narakasura. Now we have Penang Adventist Hospital,
11-23-2021 | Leisure, Entertainment, Miscel …
Advent Messenger
Adventist Black Awareness Celebration Fails After School Published Photos of Whi …
A Seventh-day Adventist Academy in Tocantins, a state in central Brazil, decided to “honor” November 20, the national day of black awareness in Brazil. Gurupi Adventist College (Academy) posted images on its Facebook page of white students painted in black and wearing wigs. In other words, students came to school dressed in “blackface.” Blackface is when white people paint themselves dark to imitate those of African descent. Blackface is considered
11-01-2021 | Leisure, Entertainment, Miscel …
Advent Messen
Adventist Insubordination Dressed Like a Catholic Procession
“We may have to remain here in this world because of insubordination many more years” (Evangelism, p. 696). We don’t just want to act like insubordinate Rome; we also want to dress like them. On Sabbath, October 23, 2021, the Central States Conference of Seventh-day Adventists ordained Kimberly Bulgin to the gospel ministry. She was ordained into the ministry with full credentials. This is nothing less than insubordination. Here we have
09-26-2021 | Leisure, Entertainment, Miscel …
Advent Messenger
An Adventist Division, a Conference, the Pathfinders, Adventist Academies and Ch …
Arbor Day in South America was celebrated this year on September 21, 2021. On this day people are encouraged to plant trees and participate in educating the public about the importance of sustainable development. It is one of the many days of the year set aside to promote conservation. They also speak out against climate change and the destruction of the environment on Arbor Day. A lot of coordination and
05-19-2021 | Leisure, Entertainment, Miscel …
Advent Messenger
The Seventh-day Adventist Church in Spain has Fully Committed Itself to Laudato …
The Spanish Union of Churches Conference is the headquarters of the Seventh-day Adventist Church in Spain. Its official news magazine is called Revista Adventsita España. Esther Azón, co-editor of Revista Adventista España, recently wrote a short article and provided a link to a 102-page report revealing that Seventh-day Adventist institutions within her union have been participating in government sponsored, ecumenical, climate change initiatives. These initiatives are promoting and implementing the
Comments about openPR
We publish our press releases on openPR.de because we like people who are "open" - just like us.
Frank Obels, CEO, INCONET - Informationssysteme, Communication und Netzwerkberatung GmbH