Tentec Celebrates 25 Years of Innovation as Sales Continue to Grow 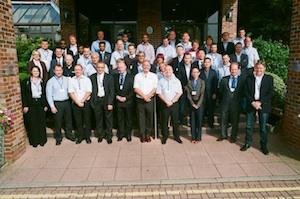 Tentec Ltd, renowned throughout the world for providing bolt tightening solutions is celebrating its 25th Anniversary. Founded in 1988 by current Managing Director and CEO Mike Gethings and Adrian Pegler respectively, Tentec has grown from a small company providing hydraulic bolts to the coal mining industry to a multi-million pound global organisation that supplies innovative bolt tightening solutions to a wide range of industries including petrochemical, renewable energy, offshore and nuclear.“The last 25 years have been an exciting and interesting journey.” explains Mike. “When Adrian and I began there were 240 deep coal mines here in the UK, so we were kept very busy in that industry for our first few years. By the early 1990s the mines began to close, we had started exporting our products and realised that we needed to diversify the business, certainly in the UK.”Due to the success of the company in the early years and increasing exports, by 1992 Tentec was in the position to expand and start the diversification process, although bolt tensioning would remain at the core of its business. Tentec began designing and manufacturing bolt tensioners for the oil and gas industry and from 1992–1999 saw its products used in a number of different industries including petrochem, steel and power generation. In 1994 it entered the subsea market with the introduction of a unique range of multi-stud tensioners (MSTs).The next milestone in Tentec’s history was 2000 when the company moved into its purpose-built premises in West Bromwich, UK. This enabled further development as stocks could be kept, so guaranteeing fast delivery – an area where many similar companies could not compete. Tentec’s design team also grew meaning as well as standard equipment, Tentec could also provide customised tools, manufactured exactly to customers’ requirements. In 2008 Tentec launched a new range of products for the wind energy market and soon became one of the leading names within the industry. Tentec continues to innovate and over the last few years the company has added a range of torque wrenches to its product portfolio and new bolt tensioners have been launched for the offshore and subsea markets. The latest innovation has been the new V-Series of Compact Flange bolt tensioners. These new products are being launched at the Offshore Europe exhibition in September and represents another major step forward for the offshore, onshore and subsea installation and maintenance industries.As Tentec celebrates its 25th year of business, the company now has 40 distributors worldwide and a team of over 60 personnel at its HQ in the UK. With a commitment to HSEQ and product innovation, Tentec has ambitious plans for the coming years. Bucking an industry trend that sees more Chinese goods imported to the UK than exported, with the appointment of a new distributor in China in 2012, Tentec now sees the Chinese market as one of its most important export markets. “We want to continue providing the best possible bolt tightening products and accessories.” says Mike. “We are committed to providing our customers with high-quality tools and customer satisfaction is our prime objective. We would also like to thank all our customers throughout the world for supporting us and promise that we will continue to provide all industries with the equipment that they need to carry out their operations safely and efficiently.” - ends -Tentec design, manufacture and market innovative bolt tightening equipment. As an innovative producer of bolt tightening equipment all tools are produced with a high level of focus on quality and safety. The company has Lloyds quality approvals to ISO 9001. ISO 14001 & BS OHSHS 18001. The bolt tensioning products are designed to suit diverse applications in varied working environments throughout the industrialized world and many unique features are incorporated into the products to ensure that they are simple, reliable and safe.Paul Egginton. Tentec Ltd. Plymouth House. Guns Lane, West Bromwich, West Midlands B70 9HS. Tel: + 44 (0) 121 524 1990 Fax: + 44 (0) 121 524 1999 E-mail: sales@tentec.net Web: http://www.tentec.net Twitter: http://twitter.com/wind_at_tentec UK Press Contact: Eileen Holmes-Ievers. In Press Public Relations Ltd. St John's Chapel, High Street, Lambourn, Berkshire. RG17 8XL. Tel. +44 (0)1488 674200 E-mail: eileen@inpress.co.uk http://www.inpress.co.uk Twitter: http://twitter.com/InPressPR

02-27-2015 | Energy & Environment
Tentec Ltd
Tentec Launch Innovative New Range of Spring Return Topside Bolt Tensioning Tool …
Tentec, a world-leading designer, manufacturer and supplier of bolt tightening equipment for the oil and gas industry will be launching its brand new range of topside bolt tensioning tools at AOG 2015 in Perth, Australia 11-20th March. Visitors will be able to view Tentec’s Force10 tools on the stand of its Australian distributor National Tools Booth M1. The Force10 range of topside bolt tensioning tools from Tentec consist of 10
10-07-2014 | Energy & Environment
Tentec Ltd
Tentec Fulfils Major Bolt Tensioning Order for Wind Turbines in China
Working together with its distributor in China, HTS, Tentec has sealed a major order for its bolt tensioning equipment from a leading international wind turbine manufacturer. The order involves the supply of 50 specially designed WTB blade bolt tensioners for the new G114 wind turbines. Tentec’s standard Aero WTB series is a purpose designed range of hydraulic bolt tensioning tools to suit most wind turbine bolting applications. All WTB tensioning tools
05-15-2014 | Energy & Environment
Tentec Ltd
Tentec Exhibit Bolt Tensioners at Global Offshore Wind and Windforce 2014
West Bromwich, West Midlands, May 14, 2014: Hydraulic bolt tensioning specialists, Tentec Ltd will be exhibiting its Aero range of bolt tensioning equipment for wind turbines on Stand 205 at Global Offshore Wind 2014 in Glasgow and at Windforce 2014 in Bremen, Germany on Stand F12. On display will be Tentec’s Aero WTB and WTF ranges of bolt tensioners along with the WTP3 pump. A decision to attend both
03-13-2014 | Energy & Environment
Tentec Ltd
Tentec Now Offers Worldwide Rental on all Topside and Subsea Bolt Tensioners
West Bromwich, UK, 12 March 2014: Tentec, one of the world’s leading designers, manufacturers and suppliers of bolt tightening equipment is pleased to announce that due to popular demand, its renowned ranges of topside and subsea bolt tensioning equipment is now available for worldwide rental. Supported by Tentec’s established worldwide distributor network, this latest move enables organisations to hire and use tools just when they need them, so keeping project

10-12-2018 | Leisure, Entertainment, Miscel …
PlayerAuctions™, LLC
Celebrate Halloween in OSRS!
Halloween is almost upon us and OSRS won't let such an event pass by without giving fans something to get excited about! Last October 8, they opened the ‘Til Death Do Us Part' event. It allows players to aid Death to free his general from a mysterious rift. When they're successful, Death won't leave his helpers empty-handed. He'll bring them to a room filled with various treasures. What's in store
08-03-2018 | Business, Economy, Finances, B …
Detectamet Ltd
Detectamet Celebrate 15th Birthday!!
From its ‘under the stairs’ start-up in 2003 Pocklington company Detectamet has outgrown three premises and moved last year into its fourth home, Prospect House, on the Pocklington Industrial Estate. The company helps food manufacturers and pharmaceutical businesses to reduce the risk of food contamination by manufacturing and distributing more than 350 products that are made from metal detectable and X-ray visible plastics. Sean Smith, Detectamet’s Chairman, said “When the company
10-06-2016 | IT, New Media & Software
Advent IM Ltd
Advent IM helps celebrate IISP’s 10th anniversary
The Institute of Information Security Professionals (IISP) celebrates a ten year anniversary in October and Advent IM Ltd are joining the celebrations as Gold Sponsors of the commemorative event. The celebration plans for the tenth anniversary of the Institute are well underway and Advent IM Ltd – Independent Information and Cyber Security Consultancy, today announced their sponsorship of the evening event in London on October18th 2016. Advent IM Director and IISP Member
04-07-2016 | Advertising, Media Consulting, …
Paper Innovation Ltd
Paper Innovation Celebrate 22 Years Trading
This month sees Paper Innovation celebrate 22 years in manufacturing and printing excellence of promotional paper products. Inaugerated in April 1994, the company provided the first UK competition to 3M’s all-conquering Post-It Note. The first seeds were sown in Belshill, Scotland with modest investment, but an abundance of vision, determination and commitment to produce innovative, high quality paper products. Two decades of innovation, investment and involvement have made Paper Innovation
09-24-2013 | Fashion, Lifestyle, Trends
ASIANinNY.com
Celebrate Taiwan @ Grand Central Terminal
Sep 18th 2013, New York - Taiwan Tourism Bureau Office in New York partners with the Smithsonian Museum to promote Taiwan culture with a “Celebrate Taiwan @ Grand Central Terminal” event on September 28, 2013 from 11AM to 2PM for “Museum Day Live!”. The Grand Central Terminal is one of Manhattan’s most famous attractions, and is a part of the U.S Beaux Arts Wonder architectures. Recently, Taiwan Hsinchu Railway Station
08-01-2011 | IT, New Media & Software
Distinction Design Agency
Distinction Celebrate 10 Years
NOTTINGHAM-BASED DESIGN AGENCY, DISTINCTION, IS PROUD TO BE CELEBRATING THEIR FIRST 10 YEARS IN BUSINESS, AND HAVE BIG PLANS FOR THE NEXT DECADE. Distinction is an integrated design agency, providing strategy-led creative, digital and marketing services. Operating from a design studio in Nottingham and a regional sales office in London, Distinction was awarded Recommended Agency status in 2010, and was most recently shortlisted for the ‘Best in Effectiveness’ 2011 RAR awards. Since their
Comments about openPR
I can't but agree to the positive statements about your portal: easy to use, clear layout, very good search function, and quick editing!
Jens O'Brien, Borgmeier Media Communication