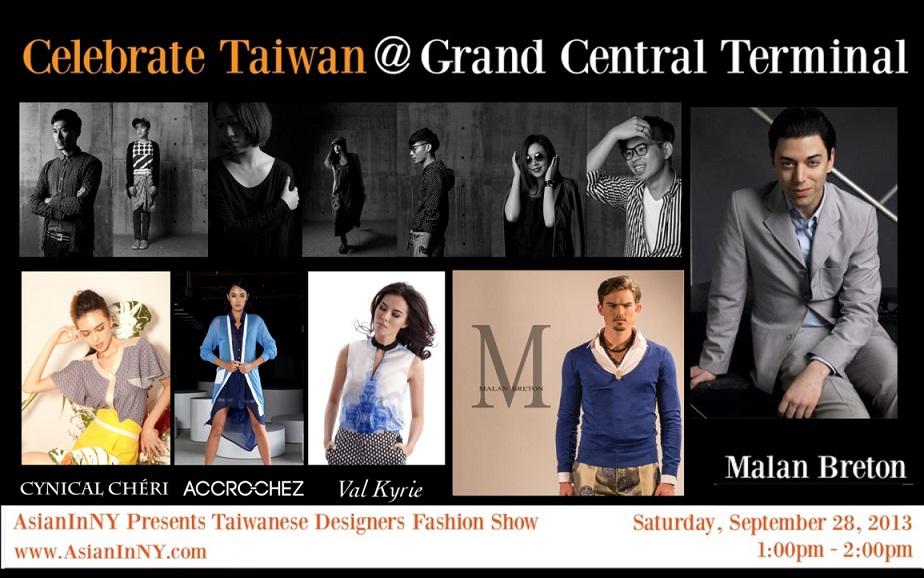 Sep 18th 2013, New York - Taiwan Tourism Bureau Office in New York partners with the Smithsonian Museum to promote Taiwan culture with a “Celebrate Taiwan @ Grand Central Terminal” event on September 28, 2013 from 11AM to 2PM for “Museum Day Live!”. The Grand Central Terminal is one of Manhattan’s most famous attractions, and is a part of the U.S Beaux Arts Wonder architectures. Recently, Taiwan Hsinchu Railway Station and Grand Central Terminal signed “Sister Stations” agreement as both stations celebrate 100 years of service. The event was a great success and promoted Taiwan Tourism. Therefore, the “Celebrate Taiwan @ Grand Central Terminal” event will be celebrating the Smithsonian’s “Museum Day Live!”, the Grand Central station’s 100th anniversary and the best of what Taiwan can offer. The “Celebrate Taiwan @ Grand Central Terminal” event will highlight Taiwan’s art, food, and fashion with exciting performances to share Taiwan’s tourism resources and develop a deep understanding of the beautiful Taiwanese culture. Some of the featured performances include live cultural demonstrations, aboriginal dance, techno Third Prince performance, and a fashion show hosted by AsianInNY, which will showcase collections from Taiwanese designers. Also, live food demonstrations will be done by Chef Chang from Shin Yeh Taiwanese Restaurant, and artist PangChiu Liu will display his art mastery through calligraphy and porcelain carving work. As entrusted by Overseas Chinese Affairs Council (OCAC), the Corporate Synergy Development Center (CSD) has invited a professional team of Taiwan Shin Yeh International Dining Group on September 28 to serve the most precious dish – “Taiwan Caviar Apple Mullet” – which can only be seen at Taiwan’s major festivals and banquets. Chef Chang of Shin Yeh Restaurant states, “This is the authentic taste of Taiwanese caviar, how does it compare? Come and taste it yourself.” In addition, Taiwanese high mountain-grown oolong tea and popular bubble milk tea are available for sampling. Artist PangChiu Liu will make an appearance at the event and showcase his talents in the arts. He will do a live demonstration of his calligraphy and porcelain carving, which is greatly admired for his craft and artistry. For those admirers, traditional painted fans will be given out for free. Other arts scheduled to be on stage include a traditional aboriginal art dance by the Yungli Dance Group and performance by the Third Prince Troupe. Coinciding with New York Fashion Week in September, AsianInNY (the leader in multicultural networking and entertainment platform) will present its 9th Fashion Show, featuring Taiwanese Designers Spring 2014 Collections. Well-known Taiwanese, New York-based designer Wenlan Chia has guided Shih Chien University students to design three clothing brands and launched PRAXES, a fashion incubation program that aims to nurture global fashion brands and professionals from Taiwan. Furthermore, famous Taiwan-born, American designer Malan Breton was extended an invitation to showcase his collection. His designs are filled with eastern elements of Taiwan influence, and have attracted media attention in the fashion field, especially after his New York Fashion Week Spring 2014 presentation at Lincoln Center. This year’s Taiwan Tourism Bureau and the nation’s largest organization Smithsonian Museum conduct a cross-industry alliance to promote “Museum Day Live,” where 1,500 museums nationwide participate. The Taiwan Tourism Bureau has promoted a number of Taiwan attractions on travel websites and magazines for the last four months, all culminating in their hosting of Museum Day Live! at Grand Central Terminal, offering potential travelers an opportunity to see everything live and experience the rich culture in person. Taiwan’s National Palace Museum, a top tourist attraction, will also exhibit at Museum Day Live! Event. The Grand Central Station estimates a minimum of 70,000 daily visitors. It is the perfect venue to reach out to everyone from all walks of life and introduce the essence of Taiwan through a grand, momentous affair. This historical landmark and the event guarantees its visitors an insightful and stunning look into Taiwan. Taiwan has an abundance of beautiful landscape, delicious cuisine, and rich culture. The country has a diverse amount of cultural events all year round. In 2013, the Taiwan Tourism Bureau officially launched “Time for Celebrate: Taiwan Tourism Calendar” to inform international visitors about the fun and exciting activities Taiwan has to offer. The time to travel is now, and the best place to visit is Taiwan.About AsianinNY.com: New York’s leader in Asian networking and a multi-cultural sharing site. AsianinNY.com offers a cultural slice of the Asian life – with everything from Jobs, Housing, Networking, Studying, Sample Sales, Local Events, Restaurants, Travel and News – you can find everything here at your fingertips. The site is updated every day, so you can always indulge yourself with the vast resources on our website.The goal of ASIANinNY is to facilitate connection. We intend to help those living in New York City to find their way, both within their own lives and their communities. There is nothing harder than entering a new city or culture without a little help, which is why ASIANinNY wants to help ease this transition. Instead of feeling lost, one can feel independent and secure with the help of ASIANinNY.com and all of its resources.AsianInNY 350 W 5th Ave. New York, New York asianinny@ymail.com

08-24-2017 | Fashion, Lifestyle, Trends
Orbis Research
Jewellery Market in Taiwan
Summary This report helps to analyze competitive developments such as joint ventures, strategic alliances, mergers and acquisitions, new product developments, and research and developments in the Jewellery in Taiwan Description The brand name has become a more important factor in the purchasing decisions of consumers when choosing jewellery. Consumers would rather spend the same money on a smaller diamond by a key brand name. This has benefited the sales performances of most international
06-12-2017 | Business, Economy, Finances, B …
ReportsWorldwide
Agrochemicals Market in Taiwan
ReportsWorldwide has announced the addition of a new report title Taiwan: Agrochemicals: Market Intelligence (2016-2021) to its growing collection of premium market research reports. The report “Taiwan: Agrochemicals: Market Intelligence (2016-2021)” provides market intelligence on the different market segments, based on type, active ingredient, formulation, crop, and pest. Market size and forecast (2016-2021) has been provided in terms of both, value (000 USD) and volume (000 KG) in the report. A
05-25-2016 | Advertising, Media Consulting, …
RTB House
RTB House Enters Taiwan
24 May 2016 – After several months of operation in APAC, RTB House – a tech company specializing in sophisticated retargeting scenarios and operating worldwide – has opened offices in Taiwan. This is the 4th market in RTB House Asia portfolio, after Indonesia, Malaysia and Thailand and an outcome of an expansion that started in the last quarter of 2015. All operations in Taiwan are going to be carried out
01-24-2013 | Energy & Environment
WINAICO Deutschland GmbH
Taiwan on the fast lane
WINAICO sees clear advantages in the location of its headquarters in Taiwan Creglingen, 09.01.2013 – Often Taiwan, Korea, Japan and other Asian countries are thrown into one big pot with China. This is – at least concerning the production of photovoltaic modules – not justified; because: especially between Taiwan and China as countries of production there are serious differences. While China always set its focus on the mass production of consumer
04-29-2010 | Industry, Real Estate & Constr …
Presseabteilung Taipeh Vertretung
Taiwan wins big in Geneva
Taiwan garnered 28 gold, 21 silver and 10 bronze medals at the April 24 award ceremony of the 2010 International Exhibition of Inventions of Geneva, the most number of awards earned by any participating country. This year Taiwan submitted a total of 63 entries for the exhibition, among which the Technology and Science Institute of Northern Taiwan (TSINT) took 3 gold, 6 silver and 4 bronze medals, the most number
03-25-2010 | Politics, Law & Society
Presseabteilung Taipeh Vertretung
Taiwan improves Copyright Protection
The Bills of Copyright Act and Copyright Intermediary Organization Act completed third reading at the Legislative Yuan on January 12, 2010, and has been promulgated by the President on February 10, 2010. Highlights of these two bills are as follows: 1. Copyright Act The provisions of Chapter VII (criminal penalty) do not apply in the following circumstances except for works subject to the management of copyright collective management organizations: 1) Exploitation of
Comments about openPR
9 o'clock: discuss press release with client, 10 o'clock: submit release to openPR, within the briefest possible time release is published and displayed in a prominent place on openPR.de. I am thrilled!
Zehra Spindler, Calypso Now! - Communication Agency