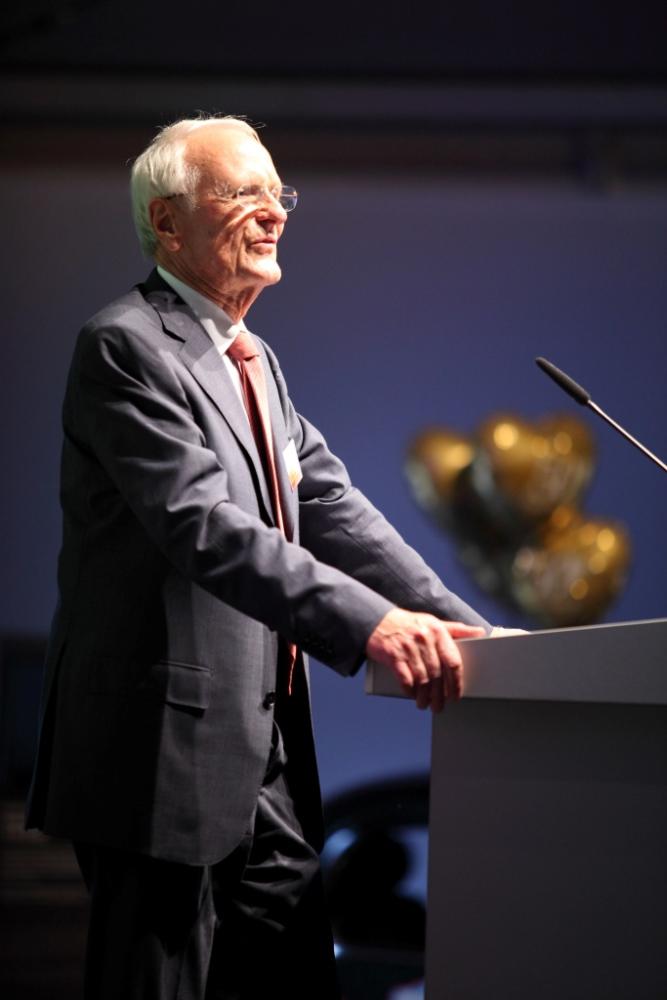 It all started in 1963 with a vision: Dr.-Ing. Karl Busch and his wife, Ayhan Busch, put the idea of designing simpler, better and more user-friendly industrial vacuum technology into practice. This meant that they could give users exactly what they needed – and the global success of Busch Vacuum Pumps and Systems is an impressive testament to this fact. In 50 years, Busch has grown from a small company into an international group with over 2,500 employees. But one thing has remained the same: the team spirit of a family company. Now the successful realisation of this vision was appropriately celebrated where Busch began, in Maulburg.All of the general managers from the 57 Busch companies in worldwide 39 countries came to the birthday celebration accompanied by their customers and business partners. The banquet hall, specifically set up for the event, was filled with 350 international guests for a festive anniversary evening celebrated in the "Black Forest" theme. Because, despite Busch's world-wide presence, the mid-sized company has remained down-to-earth and is proud of its roots in the valley of the river Wiese, in the southern part of the Black Forest. This is where Dr. Karl Busch's grandfather, Karl Wittig, laid the technical foundation for the vacuum and overpressure technology over 100 years ago by developing a rotary compressor. The evening began with a speech by Dr. Karl Busch and his wife, Ayhan Busch. They talked about Busch's basic principles. Afterwards, Ayla, Sami and Kaya Busch provided insight into the history and development of Busch in their presentation.Busch award for innovative ideas To mark the fiftieth anniversary of the company, the "Busch Award" was presented for the first time. This distinction goes to companies that notably harness modern vacuum technology and apply this in innovative processes. The first prize winner was the GEA Food Solutions GmbH company, located in Düsseldorf. They are the company that succeeded Union Verpackungsges. mbH, which was founded in 1957 in Kempten. The Union company developed a new type of packaging for fresh foods in the early 1960s: vacuum packaging. The first suitable foils for packaging were available. Now the goal was to develop a machine that could automatically shape plastic foil into the form of a tray in which food could be placed for packaging. Then, using an additional foil, an airtight seal would be created while the air within was simultaneously sucked out. This should happen as quickly and effectively as possible. At the same time, a high vacuum in the package would have to be ensured. Busch took over the technical solution for vacuum generation for the Union company and created suitable vacuum pumps with the Huckepack. Afterwards, the Union company was able to present the world's first automatic thermoforming packaging machine. Vacuum packaging was born – the result of innovative ideas and effective cooperation. Dr. Karl Busch was able to present the award to Manfred Schmidt, purchasing manager from GEA Solutions and Christoph Ullmann. Back in those days, Christoph Ullmann was the designer of this first packaging machine."Hidden Champions – On the Way to Globalia" lecture The speaker at the Busch anniversary was Professor Dr. Hermann Simon, who wrote the bestselling book, "Hidden Champions". "Hidden Champions – On the Way to Globalia" was also the topic of his lecture. For Dr. Simon, Busch is an excellent example of a "Hidden Champion" – a term that became commonplace through his work. It refers to mid-sized companies that operate with extreme success world-wide, thus becoming the market leader in their markets. These companies distinguish themselves with tremendous innovative strengths and are considered to be job creators in their own country. In the process, such companies set extremely ambitious goals and strive for growth and global market leadership. This is achieved by focussing on niche markets and close cooperation with customers. Internal success factors are streamlined organization as well as close relationships with employees and thus, low fluctuation rates. For Dr. Simon, the "Hidden Champions" are the spearhead of the German economy in the global market.Company tours Before the evening program, tours through Busch's modern manufacturing facility were given. Mechanical manufacturing and assembly of different vacuum pumps and vacuum systems were presented. At separate information points in the production plant, the guests learned interesting facts about different topics such as training, quality management or vacuum technology applications. Concrete physical experiments with a vacuum were performed in a "Vacuum Lab".Employee day During the following weekend, all employees from the main site in Maulburg and all German subsidiaries as well as the Swiss Busch companies in Magden, Porrentruy and Chevenez were invited to a family day on the plant grounds. 1700 guests populated the company grounds, where many attractions were set up for young and old. The Busch family received standing ovations and gifts from the employees. For instance, the family of proprietors was presented with a Busch logo made up of portrait photographs from all the employees.Globality As a globally active company, Busch is celebrating at all its national plants all over the world. The anniversary celebrations already began in the spring at the Busch companies in Asia. Following the path of the sun, now they have reached Europe and in the Fall, they will conclude in America.Busch Vacuum Pumps and Systems is one of the largest manufacturers of vacuum pumps, blowers and compressors in the world. Busch’s headquarters is located in Maulburg, Germany. As of 2013, Busch Vacuum Pumps and Systems employs 2300 people and features the largest selection of vacuum pumps for the industrial applications in the world. Busch has 57 companies in 39 countries and sales agents in over 30 countries.Busch Vacuum Pumps and Systems Schauinslandstraße 1 D-79689 Maulburg Germany +49 (0)7622 681-0 info@busch.dePresscontact: Uli Merkle Manager Marketing Services +49 7622 681 144

10-22-2019 | Industry, Real Estate & Constr …
Busch Vacuum Pumps and Systems
Secure clamping of small panels with vacuum
ASSTEC Assembly Technology GmbH & Co. KG specializes in developing and creating ergonomic workspaces. Its range of products and services covers everything from the supply of individual components for the manufacture of assembly, testing and shipping work stations to the design and manufacture of individual one-piece-flow production cells for full-scale industrial production. When producing tabletops and facing, or working with material to construct merchandise fixtures, chutes, drawers and shelving, ASSTEC
09-05-2019 | Industry, Real Estate & Constr …
Busch Vacuum Pumps and Systems
Vacuum measurement technology – reconsidered
The exact observance of pressures or pressure curves in vacuum-assisted processes in process engineering is an important parameter for ensuring optimum efficiency and the best product quality. Busch Vacuum Pumps and Systems has now launched the new series of VacTest vacuum measurement equipment. Designed to combine the latest advances in vacuum metrology with exceptional manufacturing quality, it provides an innovative and comprehensive portfolio of active vacuum gauges and controllers. Robust
10-31-2014 | Industry, Real Estate & Constr …
Busch Vacuum Pumps and Systems
Safe removal of spinal cord material by modern vacuum technology
The removal of spinal cord material is an important step in the animal slaughter process. Macquip Ltd. has developed a special extraction system for residue-free carcass cleaning. Macquip relies on Busch vacuum technology and uses only Mink claw vacuum pumps, which maintain a constant high vacuum for the complete extraction of spinal cord material. Macquip Ltd. is an abattoir equipment manufacturer based in Antrim, Northern Ireland. The company's products are marketed
10-24-2014 | Industry, Real Estate & Constr …
Busch Vacuum Pumps and Systems
Busch Dienste GmbH
Vacuum pumps with a variety of operating principles were exhibited on the Busch stand at Vacuum Expo in Coventry. As the leading manufacturer of vacuum pumps and systems, Busch produces models for all vacuum levels from rough to high vacuum. The main focus of the Busch stand was the COBRA screw technology – proven systems for vacuum generation to 0.01 mbar. These dry-running vacuum pumps are used as standalone vacuum

03-15-2019 | Health & Medicine
QY Research, Inc.
Gastroscopes Industry Outlook to 2025 – Karl Storz, Olympus, Endomed Systems
The report presented here is a comprehensive account that includes thorough analysis and forecast of the global Gastroscopes market. The forecast period considered for this research study is 2019-2025 and the review period is 2014-2025. With a view to ensure the highest level of accuracy of the data provided in the report, our analysts completed deep validation and revalidation processes using reliable sources and tools. The report offers unbiased and
02-27-2018 | Advertising, Media Consulting, …
INNOVATION ROOTS
Deploying Strategic Agility with X-Matrix’ workshop with Karl Scotland
INNOVATION ROOTS announces the ‘Deploying Strategic Agility using the X- Matrix’ workshop on 25 March 2018 at Hotel Radisson Gurugram. It will be conducted by Karl Scotland, a globally renowned Agile expert, creator of the X-Matrix, and the founder and director of Karl Scotland Ltd. This one-day Masterclass will introduce participants to Strategy Deployment using the ‘X-Matrix’, a framework which concisely visualises the alignment of True North, Aspirations, Strategy, Tactics, and
01-12-2018 | Business, Economy, Finances, B …
Global Info Reports
Karl Fischer Titrators Market Research Report 2017 Forecast to 2022
A Karl Fischer titrator, also known as a KF titrator, is used to determine the amount of water in a sample. Because the presence of water can affect many characteristics of a product, including reactivity, stability, and quality, KF titration is important to and is used in many industries. Food, oil, pharmaceutical, and semiconductor industries all use Karl Fischer titrators to maintain the quality of their products. There are two
04-10-2017 | Advertising, Media Consulting, …
Market Research Store
Global Cystoscope Market - Stryker, Karl Storz, Olympus, Shenda Endoscope
The cystoscope market has lenses like a telescope or microscope. These lenses let the physician focus on the inner surfaces of the urinary tract. Some cystoscopes use optical fibres (flexible glass fibres) that carry an image from the tip of the instrument to a viewing piece at the other end. Cystoscopes range from pediatric to adult and from the thickness of a pencil up to approximately 9mm and have a
12-08-2016 | Industry, Real Estate & Constr …
Voith Industrial Services
Voith Industrial Services renews contract with Karl Mayer in China
Since 2013 Voith Industrial Services China has been providing technical facility management (TFM) services at Karl Mayer (China) Ltd. in Changzhou, Jiangsu Province, China. In 2016 the contract was renewed. The services include, for example, the LV/HV Power Distribution System, Heating System, HVAC System, Chilled Water System, Air Compressor System, Cooling Water System, Energy Monitoring and Optimization, Building and Property Management as well as Forklift Maintenance. The value-added services have increased
12-30-2008 | Arts & Culture
Agora Gallery
Karl Orth: Seen and Unseen
The Agora Gallery (530 West 25th Street, Chelsea, New York, NY, 10001) is proud to present Karl Orth in Figuratively Speaking. Scheduled to run from January 6th through January 27th, the collection will feature a captivating selection of Karl Orth's iron sculptures. About Karl Orth: Although iron is a strong metal, in the hands of a master sculptor it can be rendered to exhibit tender emotions. German artist Karl Orth has the
Comments about openPR
OpenPR ist the nicest and most clearly laid out PR platform I have seen to this day. The press releases are displayed very nicely and clearly and without any unnecessary frills. The updates are fast and the finished release looks appealing and is clearly legible. Even with 16 years of experience one discovers new things from time to time. Congratulations!
Gabriele Ketterl, Director Marketing & PR, Menads