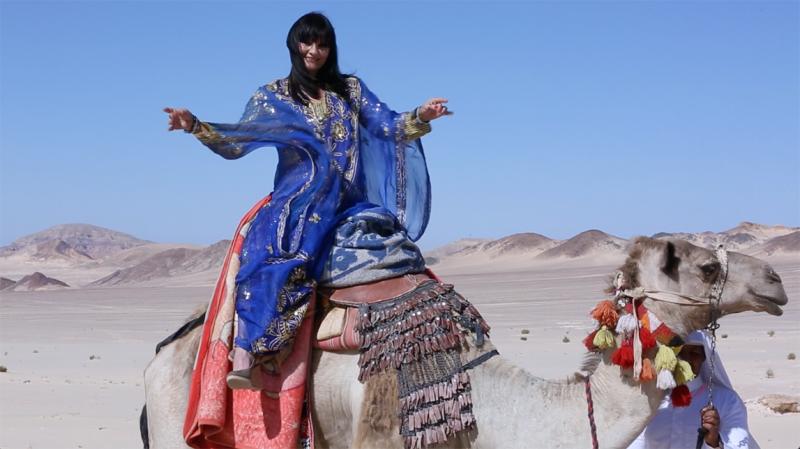 The German artist Lady Volcano realized a video for the World Cup 2022 in Qatar. The artist speaks Arabic and therefore she not only sings in English, but also in Arabic. Due to her knowledge about the Arab world and thanks to the composer Roman Voronenko, songwriter Ingo Clemenz, Arefyev Studio, Storytellers Production and Wir Schneiden Gold, she has managed to create a music video to bring football enthusiasts around the world closer to Arab culture and hospitality. She herself lived in Egypt, Saudi Arabia and Tunisia for 7 years.  Qatar has invested more than 200 billion dollars in the project and over 420 million Arabic-speaking peoples live in the 22 countries of the Arab world. Their dialects are different, but what unites them is their passion for football. The World Cup is intended to set the stage for the Arab world and draw attention to its cultural wealth. Many Arab regions have been in a phase of great suffering for years. In Syria, Yemen and Iraq there are millions of young people looking for hope. Football can give them a sense of belonging.  Through the 2022 World Cup, they will tell their stories to a larger audience. A4Music Postfach 500412 70334 Stuttgart info@ladyvolcano.com Lady Volcano -  The Arabic-speaking artist has worked in Egypt for many years and has long-standing ties to Egypt. Due to her role in the popular Egyptian TV series "Sonbol", her face is known throughout the Mena region. In her role, she played the film daughter of Lotfi Damanhouri, played by Gamil Ratib, who already starred in the legendary film "Lawrence of Arabia" with Omar Sherif.  The artist has her own label and a small music publish company.

05-05-2022 | Sports
A4Music
"Welcome to Qatar" - The New World Cup Song 2022 by Lady Volcano
A co-production sets a peace signal for the FIFA World Cup in Qatar 2022. People do not want wars. They want to come together peacefully and play football against each other. To set a sign for peace: Russian composer Roman Voronenko, German lyricist Ingo Clemenz, Ukrainian mastering engineer Jury Arefyev and German artist Lady Volcano have together produced the Fifa World Cup Qatar Song 2022: "Welcome to Qatar". (Release: 3rd of May

05-16-2017 | Leisure, Entertainment, Miscel …
LastThink
United Arab Emirates Radio Live - Stream Player
Gambian Live Radio is compatible with iPhone, iPad and iPod touch and is very easy to use. This online application is free of charge and provides you with the exclusive opportunity to listen to Radio containing newsworthy programs, breaking news, as well as state-of-the-art music from any country you want, due to its highly qualified internet broadcasting. The quality of the app is always processed by the sophisticated individuals, who
09-07-2016 | Arts & Culture
gisela graf communications
Architectural Guide United Arab Emirates
Architecture and the United Arab Emirates: these keywords almost automatically provoke thoughts of the headline-grabbing and record-breaking architecture in Abu Dhabi and Dubai. A closer inspection, however, reveals neo-traditional edifices in Sharjah or ambitious structures and trendsetting projects in the smaller emirates. Furthermore, there are numerous examples of a new generation of Emirati architecture, whose focus lies on sustainability and the preservation of diverse building traditions. The architecture in the
09-18-2012 | Energy & Environment
TiSUN GmbH
Tyrolean sun for Arab markets
In order to serve the markets in the Middle East, the Austrian solar thermal manufacturer TiSUN founded the subsidiary TiSUN GCC FZC in Dubai at the beginning of December 2011. The first projects in the MENA-region have been successfully implemented. A major project in Abu Dhabi is equipped with solar systems “made in Austria”. "The countries on the Arabian Gulf are among the sunniest regions in the world. With nine hours
02-08-2012 | Health & Medicine
Medicopex
Successful Participation at Arab Health 2012
At the annual Arab Health Exhibition in Dubai, UAE, in January Medicopex GmbH displayed their Products and Services at an enlarged booth at the Za'abeel Hall. This show for medical equipment today is one of the most important events like the Medica in Germany and the Fime in the USA and has visitors from the Arab region, as well as from the Indian subcontinent and Eastern African countries. The Medicopex
01-18-2011 | Leisure, Entertainment, Miscel …
Lovehabibi
LoveHabibi Launches Worldwide Arab & Muslim Personals Service
18 Jan 2011 - Barcelona, Spain - LoveHabibi launched officially today its worldwide personals service for Arabs and Muslims. The website caters for Arabs, Muslims and Arab Christians worldwide, with a focus on European and North American expatriate communities. "After a solid beta period, we're now excited to have enough members and functionality to roll out the site officially", said media specialist Karim Higgins. "Stay tuned to LoveHabibi for many more
07-07-2009 | IT, New Media & Software
White Mountain Technologies
Beirut Arab University Signs with UniversiTools
Beirut Arab University (BAU) in Lebanon has selected UniversiTools software to manage its full scheduling needs across university campuses in Lebanon and Egypt. Established in the Tarik El-Jadidah district of Beirut in 1960, Beirut Arab University offers over 300 programs to 15,000 students per year. The university’s aggressive strategy will see campus expansion in Tripoli, Debbieh, and the Bekaa Valley, Lebanon, as well as Alexandria, Egypt. BAU is
Comments about openPR
I can't but agree to the positive statements about your portal: easy to use, clear layout, very good search function, and quick editing!
Jens O'Brien, Borgmeier Media Communication